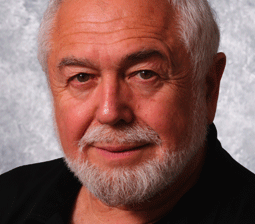 The eminent Israeli playwright Joshua Sobol will be the Schusterman Visiting Artist at the University of Washington during Spring Quarter 2012. Born in Israel in 1939, Joshua Sobol has written over sixty plays, many of which have been staged in both local productions and international festivals around the world. One of his best-known plays, Ghetto (1984), has been produced in over twenty-five countries and won the London Critics’ award for Britain’s best play of the year in 1989. Other notable plays include Soul of a Jew (1982), Alma (1999), and Witness (2004). Joshua Sobol has also written novels and non-fiction; his novel Silence (2000) was nominated for the Sapir literary prize, while Cut Throat Dog, a spy thriller, appeared in English translation via Melville House in 2010, marking his English-language prose debut. Mr. Sobol received a philosophy degree from the Sorbonne in Paris. From 1985-1988 he served as the artistic director at the Haifa Theater, where Ghetto had its Israeli premiere. He has directed theater workshops at Tel Aviv University and other institutions.

The UW is thrilled to be one of ten sites selected nationwide to participate in the Schusterman Visiting Artist Program. This program, founded in June 2008 as a project of the Foundation for Jewish Culture, brings outstanding Israeli artists in a variety of disciplines to North American institutions. Supported by the Charles and Lynn Schusterman Family Foundation and others, the Visiting Artist Program aims to connect audiences around the country with contemporary Israeli culture through diverse performances, classes, lectures, and exhibitions.

SJSP is partnering with the UW School of Drama to create an exciting calendar of classes and events featuring Mr. Sobol in the spring. In addition to teaching a playwriting course and guest-speaking in undergraduate classes, Mr. Sobol will be participating in events with UW Hillel and other community organizations.

Mark your calendars for the following special public events, sponsored by SJSP, which feature Mr. Sobol and his work:

May 8: Reading at the UW Bookstore

May 15: Staged Reading of a Selection of Plays, co-sponsored by the UW School of Drama.

Want to see more articles like this?  Sign up for our newsletter!
⇒ Learn more about the Stroum Center for Jewish Studies at the University of Washington, our Sephardic Studies Program, or our Israel Studies Program.
Note: The opinions expressed by faculty and students in our publications reflect the views of the individual writer only and not those of the Stroum Center for Jewish Studies.
By Hannah Pressman|2017-09-04T22:42:59-07:00April 2nd, 2012|Categories: Arts & Culture|Tags: Events, Israel|1 Comment