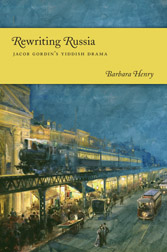 Barbara Henry, Associate Professor of Slavic Languages and Literature, has just published a new book on Yiddish drama through University of Washington Press.

Rewriting Russia: Jacob Gordin’s Yiddish Drama explores the impact of Gordin’s multi-faceted career on the development of Yiddish literature. A Russian journalist, Jewish religious reformer, and Yididsh playwright during the “Golden Age” of Yiddish theater in New York, Gordin wore many hats and used literature to symbolically construct Russian Jews’ narrative of themselves. Henry’s elegant analysis, including scrutiny of Tsarist-era archives, is drawing praise from Jewish historians and cultural scholars around the country for its innovative approach to literary history. 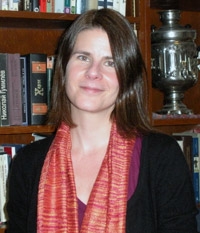 JTNews recently profiled Professor Henry with an interview about the roots of her interest in Yiddish culture:

Yiddish was in the water where she grew up in New Jersey, she explains. She loved klezmer as a child and ‘wanted to know what the songs were about.’ Career-wise, it became ‘a natural extension of my interest in Russia.’

Get the full story here

Congratulations to Professor Henry on publishing such an impressive debut work!

Want to see more articles like this?  Sign up for our newsletter!
⇒ Learn more about the Stroum Center for Jewish Studies at the University of Washington, our Sephardic Studies Program, or our Israel Studies Program.
Note: The opinions expressed by faculty and students in our publications reflect the views of the individual writer only and not those of the Stroum Center for Jewish Studies.
By Hannah Pressman|2018-06-11T11:45:52-07:00April 2nd, 2012|Categories: Arts & Culture|Tags: Barbara Henry, Faculty Publications|0 Comments