Why I Heart Hebrew School 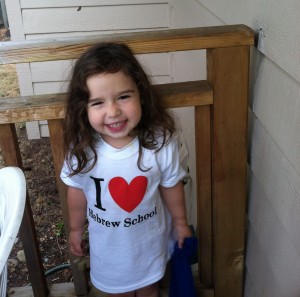 It starts with a smile: a change in our collective posture might alter the culture of Hebrew school.

Have you ever seen 4th-grade boys doing the Gangnam Style dance to Miriam’s song?  Heard 6th graders discuss what Star Wars and the Talmud have in common? Felt the joy of a 1st-grade class singing songs to the elderly at the Kline Galland home? This is what I experience all the time as the principal of a Hebrew school, and it is inspiring.

So why is it that a sense of hopelessness hangs around Jewish supplementary learning? Why are there fewer less-respected jobs in the Jewish professional world than “Hebrew school teacher”?

There are a few acknowledged answers to this question; such as, Hebrew school classes are often taught by part-time staff who are balancing multiple jobs and demands, there are limited volunteer and financial resources, and schools tend to overemphasize the bar/bat mitzvah as an end goal, just to name a few.

I have witnessed amazing teachers and am blessed to have a well-resourced school. While I know that the problems above are real, I also have become more concerned about the general culture of negativity around this endeavor. When it comes to supplementary school and congregational life in general, there is often a presumption of boredom, sometimes based on prior experience, which a person must first overcome.

[1] (Click here to find out more about “spiritual boredom.”) Imagine taking a family trip to an amazing resort but no one in the family, except for you, wants to go.  How long does it take until people begin to realize the beauty and have a good time? Now, imagine taking that same trip, except this time everyone is excited about the adventure ahead.  How long does it take for people to experience the joy of what the resort has to offer now?

Amy Cuddy, a social psychologist from Harvard, has done extensive research on first impressions. She claims that two of the first things we assess about each other are warmth and competence. Furthermore, she says each of us are placed into boxes based on these categories, which are mostly determined by stereotypes.  For example, working mothers (such as me) are seen as both significantly nicer and significantly less competent than working fathers or childless men and women, a presumption referred to as the ”motherhood penalty.” The motherhood penalty is opposed to the fatherhood “bonus,” where working dads are seen as both more competent and warmer.

Cuddy also states that the practical applications of this study are to convince others, as well as yourself, that you are in the competent and warm box. For example, she encourages her female MBA students to sit more like men (legs uncrossed, back and shoulder up high) in job interviews, which makes them appear larger instead of smaller and thus more component.  This change in posture actually affects brain chemistry and positively influences both how other people perceive you and how perceive yourself. She calls the practice of expanding your body “power posing.” She reported that after only two minutes of “power posing,” hormone levels changed and feelings of competence increased among those studied. [2] 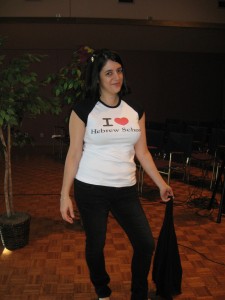 Hebrew School also has a stereotype issue and, if it were a person, would probably be placed into the cold and incompetent box (even a greater penalty than motherhood – if you can imagine that!).  Cuddy’s research focuses on our non-verbal communication, but her message is transferable to the Hebrew school model.  Believe and act like you are powerful and others will believe it too.  When you start from a position of competence then people will more quickly engage, feel energized, and be excited for the process. Of course, it is our job to keep it that way. However, when your child explains how she made gift bags for Jewish Family Service on Purim because giving to others is one of our obligations, or is beaming after reading Torah for the first time, or discusses the parshah with you after watching a G-dcast video in class, your reaction might just be, “I told you Hebrew school is great!,” instead of – “Really?!”

I encourage you to take two minutes and do some “power posing” for Hebrew School. Believe that it is a significant agent for community building, meaningful Jewish engagement, and yes…fun.  If you are a committed congregant, have children entering religious school, think that one day you might actually join a synagogue, or just simple care, I encourage you to try it…you might realize that you heart Hebrew School, too.

Rabbi Jill Levy is the Director of Congregational Learning at Herzl-Ner Tamid Conservative Synagogue on Mercer Island. Rabbi Levy is an alumna of the UW Jewish Studies Program (’94-’98) and proud past student president of UW Hillel (’96-’98). She was ordained from the Jewish Theological Seminary in 2011 and is a Wexner Graduate Fellowship Alumna. She is very excited to be back in town joined by her husband and two daughters, who both  love Hebrew School too. Rabbi Levy is a member of the JewDub Editorial Council for 2012-2013.