Zion in the Far East 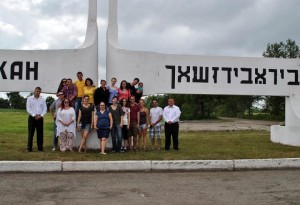 This summer, the UW Hillel sponsored a service trip for JConnecters to Russia. I anxiously awaited Facebook photos that I knew were inevitable, because I wanted to see what was, specifically, left of Birobidzhan. Here’s just one, special thanks to Alice Gray!

Birbodizhan, the capital of the Jewish Autonomous Region in the former Soviet Union, was Stalin’s plan for the new homeland, new Zion, if you will, for the Jews of the Soviet Union. While I’m sure some people would bring up conspiracy theories of Stalin’s final plan for the Jews (the one I hear over and over is that Stalin planned to gather all the Jews there to then exterminate them), and while I can’t rule them out given the tragic history of Jews in the USSR,  historically, it’s actually a part of a Soviet policy called Korenizatssia or “indigenization.” Lenin and Stalin believed that national, cultural consciousness was a necessary part of the Marxist historical timeline (first comes national consciousness, then class consciousness). As Stalin paradoxically argued, “a nation has the right to determine its fate freely… it has the right to live as it wishes.” The establishment of autonomous republics (The Soviet Socialist Republics), regions, and national territories (called Autonomous Soviet Socialist Republics) would, supposedly, solve the “national question.” And Birobidzhan and the JAR would, naturally, solve the Jewish Question regardless of the Zionist Jews pioneering in Palestine. (It is also interesting to remember that the Soviet Union was actually one of the first States to not only vote for Partition but also to recognize the State of Israel in 1948).

The Soviets tried to encourage migration to Birobidzhan in the late 1920s and early 1930s as a place for the secular expression of Jewish culture. Yiddish, with its roots in the revolutionary movements of the Pale of Settlement of the Russian Empire, was determined the proletarian language of choice. Hebrew, on the other hand, was a sacred language, the language of liturgy, and, later on in the decade, the language of the State of Israel. It was violently repressed.

Thus the Soviet government supported Yiddish cultural institutions in Moscow and St. Petersburg, and its cultural vanguards like writers Vasilly Grossman and Yitzak Fefer, and MosGOSET (Moskovskii Gusudarstvennyi Evreiskii Teatr) director Solomon Mikhoels (who would be murdered in 1948 by Stalin’s secret police). The MosGOSET and its sister theater, BirGOSET in Birobidzhan, were charged with putting on such Yiddish theatrical classics as Sholom Aleichem’s Tevye the Milkman, Avrom Goldfadn’s  Bar Kokhba, as well as works by contemporary Soviet Yiddish writers, such as Perets Markish and Dovid Bergelson. The theater also performed a Yiddish translation of William Shakespeare’s King Lear. Many of the theater’s plays were ostensibly supportive of the Soviet state, but closer readings by some scholars suggest that they actually contained veiled critiques Stalin’s regime.

It’s easy to forget that a vibrant Yiddish culture existed in the Soviet Union, and in the Russian Far East. Despite Birobidzhan’s failures (very small amounts of Jews actually went to Birobidzhan), it’s fascinating to think about. What if the project had been (more) successful, and more Jews had gone to Birobidzhan? What would have happened to the Yiddish language? What would have happened had Stalin died in 1947? Remember, it is one of the ironies of history that Stalin, arguably one of the biggest anti-Semites of the 20th century, actually supported a vote for Partition in 1948. But that’s an enigma best saved for another day.

[1] Jeffrey Veidlinger makes an excellent argument in his 2000 monograph on the Moscow State Yiddish Theater by interrogating the language of the Moscow State Yiddish Theater. For more see Veidlinger, Jeffrey. 2000. The Moscow State Yiddish Theater: Jewish culture on the Soviet stage. Bloomington: Indiana University Press. For a fascinating study of Marc Chagall and the artists of the MosGOSET, please see Goodman, Susan Tumarkin, and Zvi Y. Gitelman. 2008. Chagall and the Artists of the Russian Jewish Theater. New York: Jewish Museum, under the auspices of the Jewish Theological Seminary of America.
Want to see more articles like this?  Sign up for our newsletter!
⇒ Learn more about the Stroum Center for Jewish Studies at the University of Washington, our Sephardic Studies Program, or our Israel Studies Program.
Note: The opinions expressed by faculty and students in our publications reflect the views of the individual writer only and not those of the Stroum Center for Jewish Studies.
By Sarah Zaides|2017-09-04T22:43:03-07:00December 19th, 2011|Categories: Global Judaism|Tags: Russia, Sarah Zaides, Soviet Union, Yiddish|0 Comments