Around the world in four clicks! We hand-pick unusual and noteworthy news items of Jewish interest from all corners of the globe. It’s like taking your web-surfing in a convenient “to go” cup. A fresh serving of news, brought to you by JewDub.

This week, we have two different perspectives from the Diaspora: a new take on hamantaschen from South Africa, as well as the important discovery of a 19th-century Ladino memoir. We also love the story of a surprising alliance between religious and secular Jews in Jerusalem attempting to restore the city’s cosmopolitan nature. Click below for more… 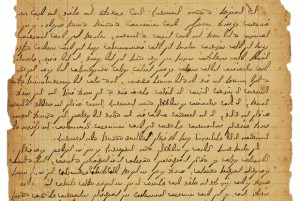 Excerpt from a recently discovered memoir in Ladino, www.tabletmag.com

A surprising alliance between secular and Haredi Jews in Jerusalem.

A bonanza for scholars of Sephardic history and fans of autobiography: the earliest known Ladino memoir from Salonica was recently found by Professor (and former Stroum Lecturer) Aron Rodrigue of Stanford University.

Want to see more articles like this?  Sign up for our newsletter!
⇒ Learn more about the Stroum Center for Jewish Studies at the University of Washington, our Sephardic Studies Program, or our Israel Studies Program.
Note: The opinions expressed by faculty and students in our publications reflect the views of the individual writer only and not those of the Stroum Center for Jewish Studies.
By Sarah Zaides|2018-01-22T10:47:35-08:00February 4th, 2012|Categories: Global Judaism, Jewish History & Thought|Tags: Food, Israel, Ladino, Purim, Sarah Zaides|0 Comments