Why Do Hannah Arendt’s Ideas about Evil and the Holocaust Still Matter? 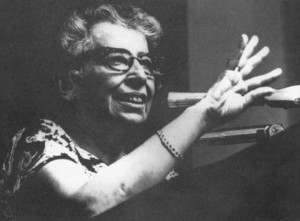 Hannah Arendt speaking at a symposium at University of Maryland Hillel, 1965. Courtesy of the American Jewish Historical Society.

6) What is the meaning of Arendt’s famous phrase, “the banality of evil”?

All of us have witnessed or suffered some form of evil in our lives caused by other people.  We might have been the victim of a lie or a violent attack.  We want to know, on reflection, what caused the person to commit this evil.  What were his or her intentions?  What made it possible for the person to form these evil intentions in the first place?  We want a basis to judge the actions as wrong and assign moral responsibility.  According the Arendt, the dominant answer to these questions involves the tendency to characterize evil as something “deep” or “profound.”  One classic answer in Christian theology is to attribute evil to Eve’s “original sin” in the Garden of Eden, which has subsequently tainted all of mankind.  We are born with this tendency in our hearts and only with God’s aid can we overcome it.  In this view, a person is morally evil when he or she allows base, demonic instincts to overcome the goodness contained in the knowledge of God’s law.  Much of the way in which we talk about crime and punishment, even if it has been secularized in psychological discourse, is expressed in these terms.  It is common, for instance, to talk about serial killers as possessed by a “demonic” force.

Many people have used this framework to explain the distinctive evil of the Holocaust.  The extent of the murderous acts seems to defy ordinary analysis and require some deeper cause.  However, Arendt argued that the case of Eichmann showed why this traditional analysis did not work.  Unlike Hitler, who seemed to personify the demonic, Eichmann was not a dramatic or presupposing figure.  He was a former vacuum salesman who rose through the ranks of the Nazi party just like a person might make a career in any organization.  He claimed not to have personally harmed anyone directly and that he was just following orders.  Arendt took his words at face value.  He was not the expression of a profound force but rather a superficial person whose life only made sense in terms of bureaucracy.  But this did not mean Eichmann was not a perpetrator of evil.  Arendt argued that the characteristic of modern evil—its very banality—was the proper lens through which to view Eichmann’s actions and the rebuttal to his own defense.

Arendt helps us to understand the weight of collective responsibility: if evil is banal, then we all have a responsibility to eradicate it in our everyday lives. We can’t simply point the finger at others.

7) What are the consequences of Arendt’s view, and how has it played out in scholarship on ethics and the Holocaust?

For one thing, it helps us understand why evil is so widespread and so difficult to stop.  We can’t simply identify its deep roots and stamp it out.  It is like a weed that no matter how often we treat our lawn still keeps coming back.  We have to take seriously its superficiality and the way in which it can affect almost everyone.  It is not surprising that modern mass organizations, like armies, corporations, and indeed any form of bureaucracy, are sources of evil as well as good.  Some recent research on the Holocaust has focused not so much on the schemes of those in charge but on the ordinary soldiers and citizens whose actions were also necessary for the heinous acts to be committed.  An example of this would be Christopher Browning’s book, Ordinary Men: Reserve Police Battalion 101 and the Final Solution in Poland.  I think that this important direction of scholarship is part of the legacy of Arendt’s concept.

For another, it makes the simple distinctions between good and evil, virtuous and vicious, much more difficult to make.  This has an important bearing on her discussion of Jewish collaboration during the war.  When we understand how evil can be banal and work through a group or organization, then we understand that it is not always simple to distinguish between perpetrators and victims, as if it were a matter of black and white.  Instead, we are more often than not in a grey zone, in which we are active parts of systems that do evil.  It is not an accident that some students of Hannah Arendt, like Larry May, have written studies of collective responsibility, in which they attempt to distinguish many degrees of responsibility. 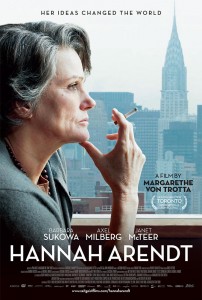 8) What does the movie, “Hannah Arendt,” do to help us understand her philosophy?

The movie focuses on the events of Arendt’s life during and after the Eichmann trial.  The images and story help dramatize the consequences of holding controversial ideas.  Sometimes the consequences are quite direct.  Colleagues at the university who had been her friends are then quick to shun her.  Other times they are more subtle and indirect.  We see this in the film’s depiction of her relations with two men, with whom she had been friends since her youth, Hans Jonas, the philosopher, and Kurt Blumenfeld, the Zionist leader.  Both are upset by her views and she has to negotiate between holding to the integrity of her views and maintaining her cherished friendships.

Of course it is very difficult to depict the act of thinking on film.  It is for that reason that smoking is so central to the film’s repertoire of images.  It is not only that Arendt did in fact chain-smoke; it is also that the burning tobacco symbolizes the intensity of her thought.  If you are not directly familiar with a philosopher’s ideas, then you have to infer their content indirectly through the way in which they affect the relations with other people.  Good movies, like this film on Arendt, tell stories that make us think and reflect on how ideas and events affect our lives.

9) What are you looking forward to hearing about in Seyla Benhabib’s Walker-Ames Lecture on “Eichmann in Jerusalem: Fifty Years Later”?

Benhabib is one of the world’s leading political philosophers.  She has written on human rights, the role of culture in politics, and of course on Hannah Arendt.  She will reflect on the meaning of the work in a culture that is at once very different and similar to the 1960s. I was completely shocked when I asked recently a very bright student whether he knew who Eichmann was, and he responded that he did not.  We cannot underestimate the fact that events and figures the older generation took for granted are unknown, or largely obscure, to the younger generation.

We have constantly to make the effort to keep historical knowledge alive. Of course, Arendt’s work is still relevant because the problems of war and mass murder are still very much with us in the twenty-first century.  Her unflinching analysis of these evils is worth studying.  I am excited that a philosopher of Benhabib’s caliber will engage with these issues here on the UW campus this month [October 24, 2013].