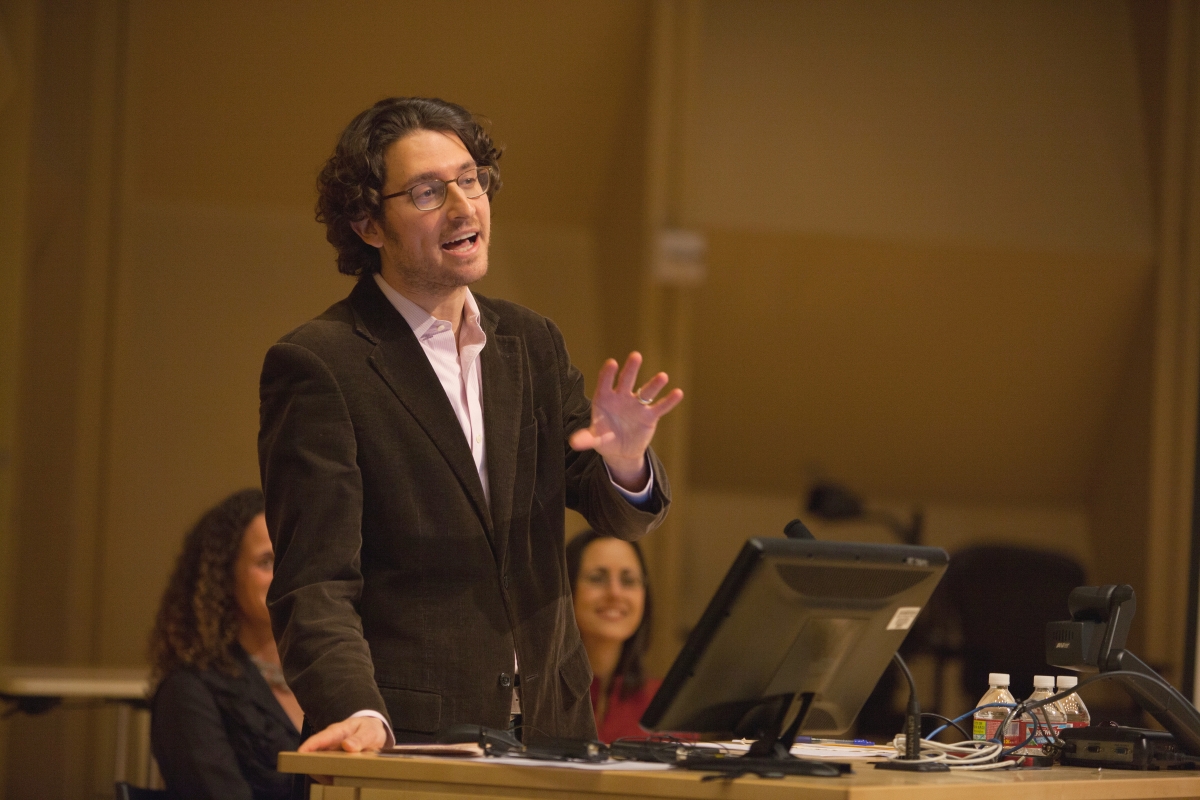 SEATTLE, February 4, 2016: The Stroum Center for Jewish Studies is thrilled to announce the establishment of the Isaac Alhadeff Professorship in Sephardic Studies at the University of Washington. This Professorship has been generously funded by the Isaac Alhadeff Foundation, a local philanthropy rooted in the Sephardic Jewish community. Dr. Devin E. Naar, current chair of the UW Sephardic Studies Program and an Assistant Professor in the Department of History, will be the first professor to hold this prestigious new appointment.

The Isaac Alhadeff Foundation is named in honor of Isaac “Ike” Alhadeff (1916-2012). An alum of Garfield High School and the University of Washington, Ike was a World War II veteran and beloved leader of his community in Seattle, where he belonged to several civic associations. With family roots on the Island of Rhodes and having grown up in a Ladino-speaking home, he was a lifelong member of Congregation Ezra Bessaroth. A proud Husky his whole life, Ike attended every home football game for over six decades. The establishment of the Alhadeff Professorship in Sephardic Studies not only honors Ike’s legacy and love for the UW, it also ensures the growth and continuing success of Sephardic Studies for years to come.

Prof. Reşat Kasaba, Director of the Henry M. Jackson School of International Studies and the Stanley D. Golub Chair of International  Studies, said, “This gift from the Isaac Alhadeff Foundation shows that our Sephardic Studies Program has already become a cherished treasure for the Seattle community; one that our friends are keen on protecting. What Prof. Naar and his colleagues have accomplished in a relatively short period of time is truly breathtaking. With this generous support we are guaranteed to have a position that is dedicated to this important area for years to come.”

Since its establishment in 2012, the Sephardic Studies Program at the University of Washington has quickly become one of the most ambitious and dynamic programs on campus, as well as a national leader in Sephardic scholarship. Based in the Stroum Center for Jewish Studies at the Henry M. Jackson School of International Studies, the program draws on the wide breadth of resources and academic leadership offered by the UW. Fundamental to this success has been the vision of Dr. Naar and the program’s partnership with Seattle’s vibrant Sephardic community.

Dr. Naar is the ideal choice for the first scholar to hold the Alhadeff Professorship. Born and raised in New Jersey, he graduate summa cum laude from Washington University in St. Louis. After a year in Greece as a Fulbright Scholar, he began the doctoral program in History at Stanford University and received his Ph.D. in 2011. His forthcoming book with Stanford University Press, Jewish Salonica: Between the Ottoman Empire and Modern Greece, based on his prize-winning dissertation, explores the impact of the collapse of the Ottoman Empire and the rise of modern Greece during the 19th and 20th centuries on the Jews of Salonica (Thessaloniki). Salonica is a major port city in today’s Greece that was once home to the largest Ladino-speaking Sephardic community in the world.

Under Dr. Naar’s leadership, UW Sephardic Studies has broken new ground in both scholarship and community engagement. These efforts have already attracted national and international media attention with press coverage appearing in seven languages. Working with a dedicated support team, he founded the Sephardic Studies Digital Library and Museum, a repository of more than one thousand scanned copies of rare artifacts in Ladino, the Judeo-Spanish language spoken by many Sephardic Jews. Many of these documents were lent to the UW by members of Seattle’s Sephardic community. Ranging from the 16th century to the present, the collection’s holdings have already surpassed the Library of Congress and Harvard University. Working with these rich resources, UW graduate students in History, the Interdisciplinary PhD program in Near and Middle East Studies, Linguistics, Spanish and Portuguese, International Studies, and Library Sciences have developed projects in Sephardic Studies.

In addition, since Dr. Naar’s arrival at the UW in 2011, public programming and community engagement in Sephardic Studies have soared. From a Symposium on Sephardic Jewry and the Holocaust to concerts by leading Ladino musicians, the events organized through the Stroum Center and in partnership with other units across campus as well as community institutions, have broken attendance records and reached new constituencies. Starting in 2013, Dr. Naar spearheaded Seattle’s annual celebration of International Ladino Day, an intergenerational gathering attended by hundreds of students, UW faculty, and community members. At these events, Dr. Naar’s heartfelt passion for preserving the endangered Ladino language is clear. This remarkable commitment to sustaining Sephardic culture for future generations makes him a very strong choice to inaugurate the Isaac Alhadeff Professorship in Sephardic Studies.

Want to see more articles like this?  Sign up for our newsletter!
⇒ Learn more about the Stroum Center for Jewish Studies at the University of Washington, our Sephardic Studies Program, or our Israel Studies Program.
Note: The opinions expressed by faculty and students in our publications reflect the views of the individual writer only and not those of the Stroum Center for Jewish Studies.
By Hannah Pressman|2017-09-04T22:41:36-07:00February 8th, 2016|Categories: News, Sephardic Studies|Tags: American Jewish Community, Devin Naar, Ladino, Seattle, Sephardic|11 Comments