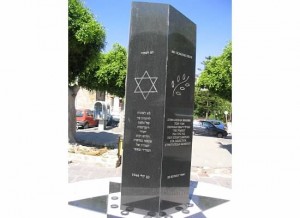 The memorial in Martyrs Square on Rhodes commemorates the Jews who were deported in July 1944. Photo by Hannah Pressman.

How does a dispersed and traumatized community re-imagine its past? What is forgotten, and what is remembered, when members of a group reconstruct their memory of a cherished place?

These were the central questions addressed by Dr. Aron Rodrigue in his keynote lecture, “Sephardim, Memory, and the Holocaust,” the inaugural event for this week’s historic symposium on Sephardic Jewry and the Holocaust. Born in Istanbul and currently teaching at Stanford University, Rodrigue is a preeminent figure in the field of Sephardic Studies. He presented his lecture as the epilogue to his current work-in-progress, and focused on the Jews of Rhodes (known as Rhodeslis) as a way of proving his broader point about the dynamics of Holocaust memory in the Sephardic community.

Rodrigue emphasized that for the Jews of Rhodes, “memory lives in a Diasporic space.” He detailed the various destinations sought by Rhodeslis: Europe, Africa, Latin America, and North America, with a large group settling here in Seattle. (Apparently, the nearby sea and mountains were reminiscent of Rhodes’ Mediterranean landscape, though the Northwest climate certainly was not.) For the Sephardic Jews living in these Diasporas, the lost “mother community” of Rhodes was remembered as a kind of idealized Paradise Lost, a sunny “Island of Roses.” From their perspective, the island of Rhodes, and in particular La Juderia (the Jewish quarter), comprise a sacred space worthy of the traditional title of “La Chica Jerusalem,” or “little Jerusalem.”

Rodrigue traced the shifting ways that dispersed Rhodeslis related to their country of origin in the decades following the cataclysm of the Holocaust. Of the 1,769 Jews deported from Rhodes in July of 1944, only 151 survived the war; the reality of the community’s near-complete devastation did not set in until some years after the war. Increased opportunities for airplane travel in the 1970s made it easier to arrange visits between resettled families scattered around the globe, and as technology for communicating improved, so did the means of finding out information about what had happened. Rodrigue designated the 1990s as a turning point in the way that Rhodeslis interacted with their birthplace: during this decade there was an uptick in “genealogical tourism,” or pilgrimages to the island. July 23rd was designated as the Rhodesli day of commemoration, with ceremonies taking place on the island every summer.

The picture that emerged from this lecture was of a dispersed community with an extremely strong sub-identity within the Sephardic community. However, I was curious to hear more–and perhaps the eventual book will unpack this question–about the concrete reasons for the Rhodes community’s uniqueness in how they construct memory; Rodrigue hinted at some possible factors, such as the islanders’ geographic feeling of solitude and distinctness, but there is surely more to this ethnographic puzzle. I also wondered whether the collective Diasporic memory of Rhodes is as uniform as he suggests, or if there are actually variegations within the community’s discourse about the remembered space.

A further consideration, which will be discussed at length during this week’s symposium, is whether the internal Sephardic transmission of Holocaust memory will in turn impact the broader historical narrative of the Holocaust. Can a phenomenon which is so inextricably tied to local memory of a particular place and time alter what Rodrigue calls “the collective global memory of the Holocaust”? What exactly will be the relationship between the history of this community and Holocaust history writ large, especially as the chronological distance from the events of World War II increases?

One of Rodrigue’s final comments really resonated with me: he called the construction of memory “dynamic and ongoing,” open to the circulation of ideas brought by new generations. How will the descendants of the original Rhodes Jewish community–like me–contribute to the perpetuation of this particularly Sephardic mode of commemoration? Our relationship to Rhodes and the Holocaust is necessarily mediated by a whole host of sources; we are not from the “mother community” on the island, but we still feel ourselves connected to it. The unprecedented access to archives and records afforded by new technologies, as well as the ability to connect virtually with relatives around the world via social media, have created exciting new opportunities for those in the Rhodesli diaspora to continue constructing collective memory and adding to the already-rich history of this community.

It is true, as Rodrigue repeatedly cautioned, that history and memory are two separate things. What his talk tantalizingly suggested is that, in the aftermath of trauma and unfathomable loss, a community’s history of memory can change.

Want to see more articles like this?  Sign up for our newsletter!
⇒ Learn more about the Stroum Center for Jewish Studies at the University of Washington, our Sephardic Studies Program, or our Israel Studies Program.
Note: The opinions expressed by faculty and students in our publications reflect the views of the individual writer only and not those of the Stroum Center for Jewish Studies.
By Hannah Pressman|2017-09-04T22:42:36-07:00April 29th, 2013|Categories: Jewish History & Thought, Our Events, Sephardic Studies|Tags: Events, History, Holocaust, Rhodes, Sephardic, Sephardic Studies|0 Comments