Dancing and jumping or laughing and singing? Sephardic Purim songs and customs 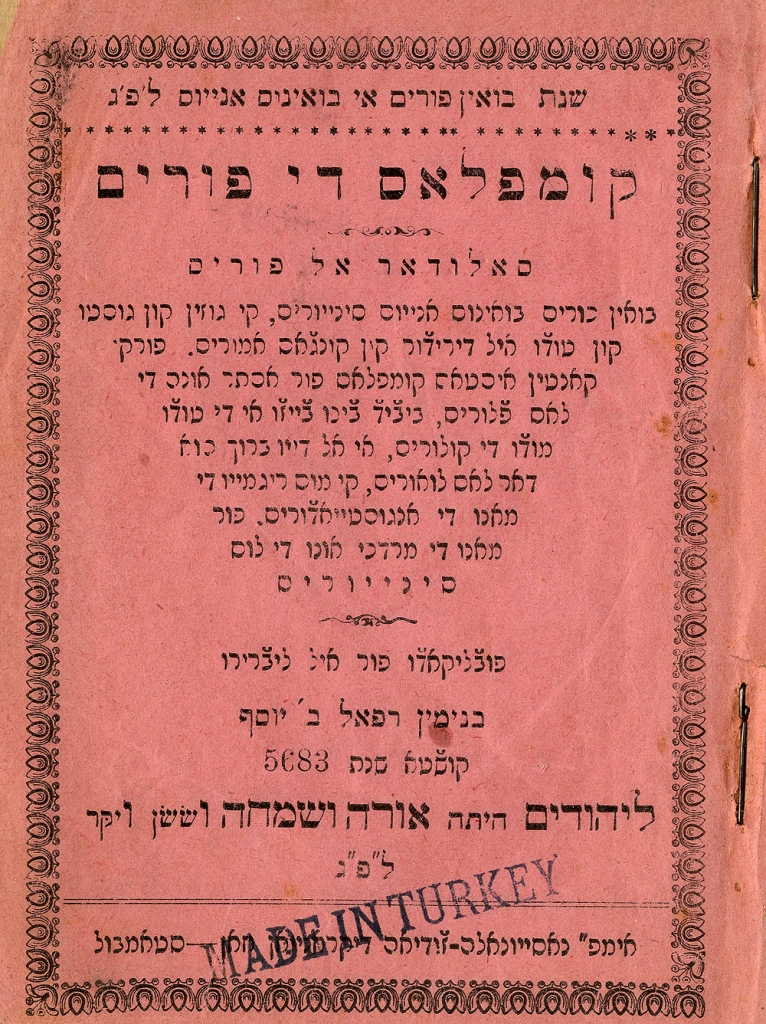 Did you know that if you are in Istanbul during Purim you should dance and jump when celebrating, but if you happen to be in Italy, you ought to laugh and sing?

These are but two variations among the many Purim customs of Sephardic Jews. As is well known, Jews around the world—Sepharadim, Ashkenazim and many others—traditionally celebrate the holiday by reading the Book of Esther, providing charity to those in need, and giving gifts of food and drinks to friends and family. The afternoon meal, know as se’udat Purim, traditionally consists of delicious meats and copious amounts of wine. (See “Sephardic Purim Customs from the Old World to the Pacific Northwest”). Sephardic Jews developed an additional tradition connected to the holiday: singing songs in Judeo-Spanish, known as komplas (or koplas) de Purim that relate the events and personalities of the Book of Esther

Although it is rare today to find someone who knows how to sing the Judeo-Spanish songs, through the Sephardic Studies Library we have been able to preserve numerous songbooks containing Koplas de Purim. That’s how we know the differences in customs between Sephardic Jews in Istanbul and those in Italy.

Here is one you might enjoy singing this year.

To start I wish to recount deeds of the Almighty G-d,

From what I wish to describe, nothing will be left out,

With dancing and jumping and with great pleasure,

Because Aman the bastard

He wanted to kill us

And also to terrify us. 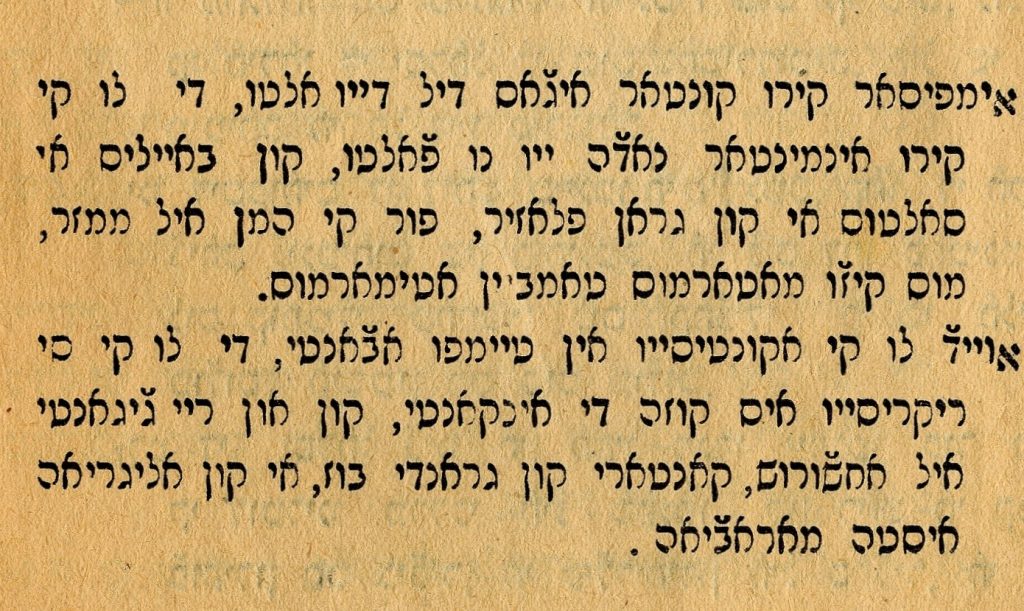 Listen to what occurred in the times of old

And what transpired was something amazing.

It deals with a great king Ahashverosh

I will sing loudly

This song is found in at least two books in the Sephardic Studies Collection at the University of Washington.

The above text is transliterated and translated from Komplas de Purim: Saludar el Purim, printed in Istanbul in the Hebrew year 5683 (1922 or 1923). This edition was published by Benjamin Raphael ben Yosef, one the most prolific printers of religious and secular books in Ladino and Hebrew in the Ottoman Empire during the early twentieth century. A similar text is found in an earlier work Sefer Alegria de Purim, published in Livorno, Italy, in 1902 by the well-known printing house established in the nineteenth century by Solomon Belforte.

With dancing and jumping and with great pleasure.

With laughing and singing and with great pleasure.

The first Sephardic rabbi ordained in the United States, Rabbi Solomon Maimon, may he live to 120, donated this copy of Sefer Alegria de Purim, now available for viewing in the Sephardic Studies Collection. Another comes from the collection of his late brother, Sam Bension Maimon, author of “The Beauty of Sephardic Life.” In 1990, the Maimon brothers joined Leo Azose of Marmara, and the esteemed Reverend Samuel Benaroya of Edirne, to record a version of “Empesar kero kontar” on their album “The Sephardic Ladino Tradition : Judeo-Spanish religious songs and liturgical chants : according to the Turkish Balkan tradition.” 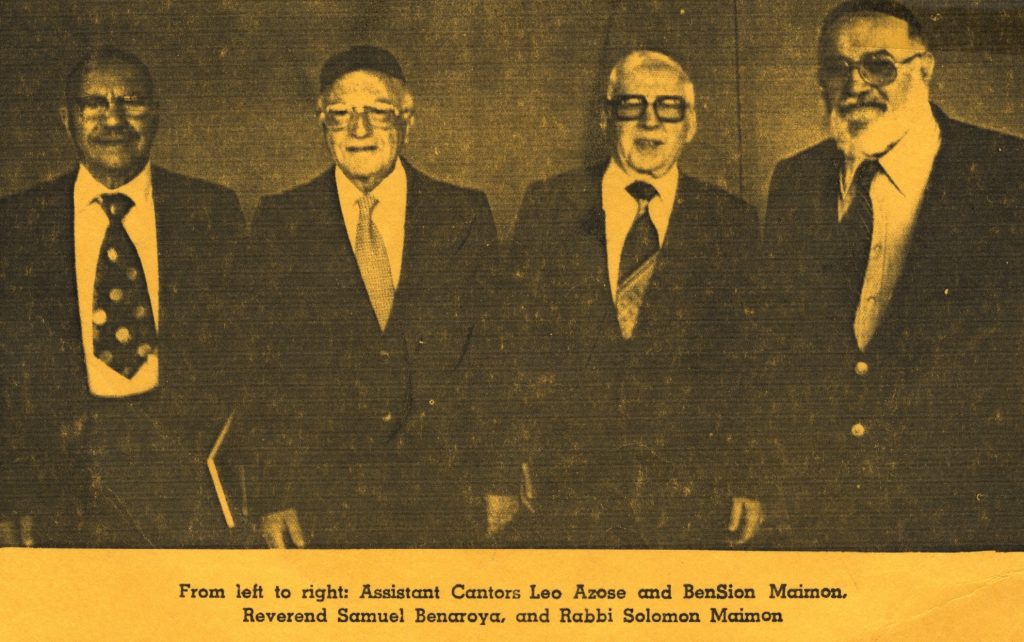 The back cover of “The Sephardic Ladino Tradition : Judeo-Spanish religious songs and liturgical chants : according to the Turkish Balkan tradition.” (Carmi House, North Hollywood, Calif.)

Curiously, the traditional refrain of this song is not found in either the Istanbul nor the Livorno editions.

On Shabbat they hanged him

On Sunday they buried him. Hey!

However, this refrain is found in Sam “Bension” Maimon’s “Beauty of Sephardic Life” and in a recording with the author and other members of the Seattle Sephardic community in “The Sephardic Ladino Tradition.”

Even more interesting is the introduction of the idea that Aman was executed on Shabbat and buried on Sunday, which does not appear to have its source in the most well know rabbinical commentaries on the book of Esther.

Keridos meldadores, dear readers: Please let us know if you are able to find a source for this mysterious tradition!

We hope to share with you the rendition of “Empesar kero kontar” performed by some of the greatest leaders and singers from Seattle’s Sephardic Bikkur Holim Congregation, which is currently being digitized, next Purim.

In the mean time, enjoy this rendition of “Empesar kero kontar” performed by Shmuel Altalef of Izmir, Turkey, from the Collection of Susana Weich-Shahak at the National Library of Israel.

May we have joy

Want to see more articles like this?  Sign up for our newsletter!
⇒ Learn more about the Stroum Center for Jewish Studies at the University of Washington, our Sephardic Studies Program, or our Israel Studies Program.
Note: The opinions expressed by faculty and students in our publications reflect the views of the individual writer only and not those of the Stroum Center for Jewish Studies.
By Ty Alhadeff|2019-03-19T16:19:32-07:00March 10th, 2017|Categories: Digital Sephardic Treasures, Sephardic Studies|Tags: Devin Naar, Jewish Holidays, Ladino, Purim, Religion & Ritual, Sephardic Studies, Ty Alhadeff|1 Comment