Sephardic Purim Customs from the Old World to the Pacific Northwest 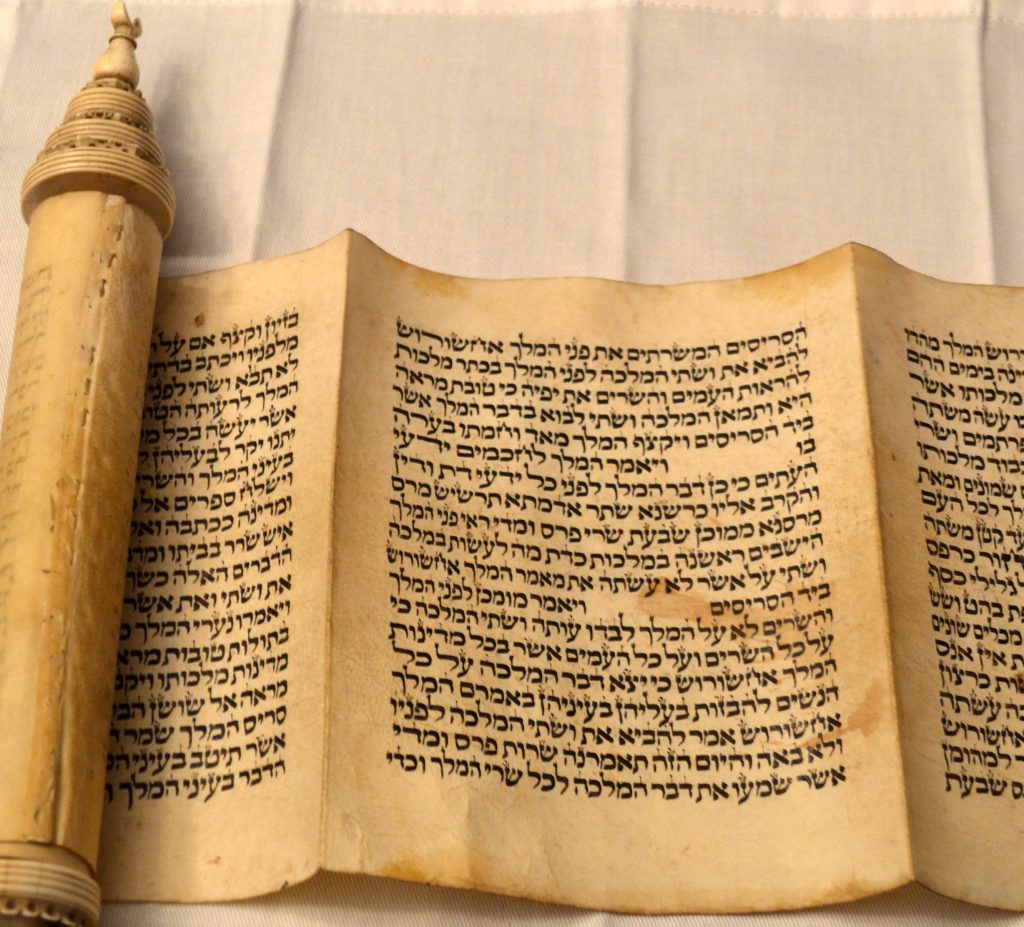 This Megillah (scroll) of the book of Esther is from the Ottoman Empire and features a crescent moon ornamentation. Courtesy of Al DeJaen.

Every spring, Jews around the world celebrate the holiday of Purim, which commemorates the victory of the Jewish queen Esther and her uncle Mordechai over the wicked Haman, who attempted to annihilate the Jews of the Persian Empire. As written in the biblical scroll (megillah) of Esther, after Haman is stopped, the Jews rest and rejoice:

“The days wherein the Jews had relief from their enemies, and the month which was turned for them from one of sorrow to gladness, and from mourning into a good day: that they should observe them as days of feasting and joy, and for sending gifts to one another and offerings to those in need” (Esther 9:22).

Jewish customs on Purim include listening to the reading of the megillah, eating signature foods, giving charity and gifts to friends, drinking, and making rowdy noise during the reading to blot out the name of Haman (traditionally pronounced Aman among the Sepharadim). We know about some of the traditions and customs of Sephardic Jews in Seattle through items in our collection and personal recollections from first-generation Seattle Sephardim whose families came to the United States from the Ottoman Empire—today’s Turkey and Rhodes—during the early twentieth century.

In a recorded oral history, Elazar Behar fondly recalls a lost custom among the Jews of Rhodes living in Seattle in the 1930s: “A unique custom we had, and that has long been discontinued, but the second night the women would all come to the synagogue in addition to the men. My dad

[Rev. David J. Behar of Ezra Bessaroth] would read the whole megillah in Ladino. The women enjoyed that. As far as reading the megillah is concerned, I think the law is just to read it that night and the next morning. Because the women liked that, we would read it on the second night in Ladino at the synagogue. We’d have a large crowd. As a result of that, we would have two nights to celebrate Purim.” 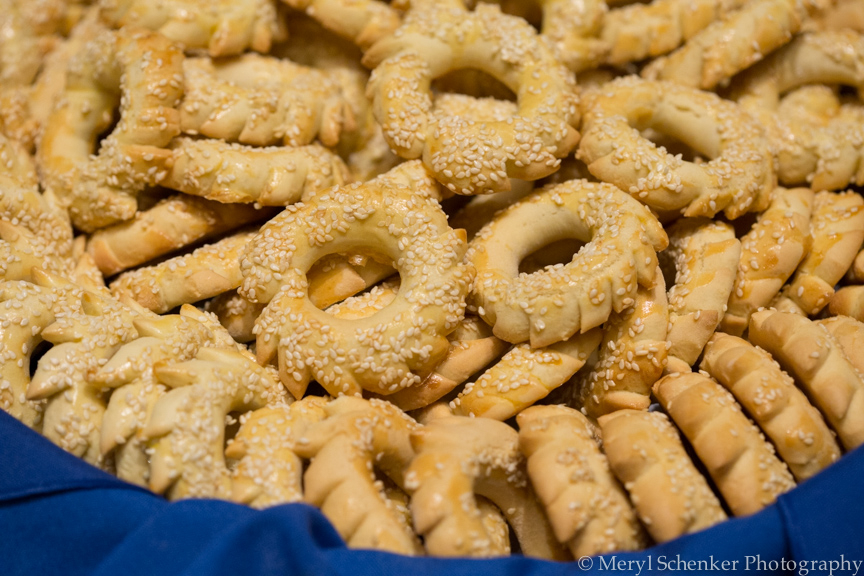 Biscochos are one of the tasty pastries traditionally eaten on Purim.

Behar also recalls the custom of women sending large silver trays of gifts to friends (in the custom mishloach manot) full of biskochos, boulukouniu (sesame with honey), and Hershey’s Kisses. He remembers his mother, Buena Leah Behar, also knitting newborn caps and including one on the tray for a new baby.

“We’d fight which of us kids could take the tray up,” recalls Behar in the interview. “Whenever we deliver the tray, then the woman would give us ten cents or a nickel, which was good money in those days. Kids would be walking up and down the streets early in the evening, Purim evening, and taking these trays back and forth.  That’s why we used to fight to take the tray. If I was carrying a tray, my brother would want to go with me because he could get a nickel out of the deal, too.”

Afterwards, they went home to eat borekas and a special dish called huevos de Haman or foulares, a hard-boiled egg wrapped in dough representing Haman in a jail cell.

In his book The Beauty of Sephardic Life, Sam Bension Maimon wrote that after the Megillah the children “used to go to Behor Condioty’s store to buy sweets, such as mavlatches, halva de susam, soujouk, pitas de susam, pitas de kaymak, loucoum, and other candies that only Mr. Condioty knew how to make. All this, so we could go home and greet our families with a hearty ‘Purim alegre y dulce’ (happy and sweet Purim)” (p. 77).*

Another well-known practice on Purim is the custom of drinking alcohol liberally. As the sixteenth century sage Rabbi Joseph Caro indicated in his famous Code of Jewish Law, the Shulhan Aruch, which he composed in the Ottoman city of Safed (present-day Tsfat in Israel): “On Purim a person should drink until he doesn’t know the difference between ‘Cursed be Haman’ and ‘Blessed be Mordechai’” (Orah Hayim, p.695).

And what is a drinking party without drinking songs? 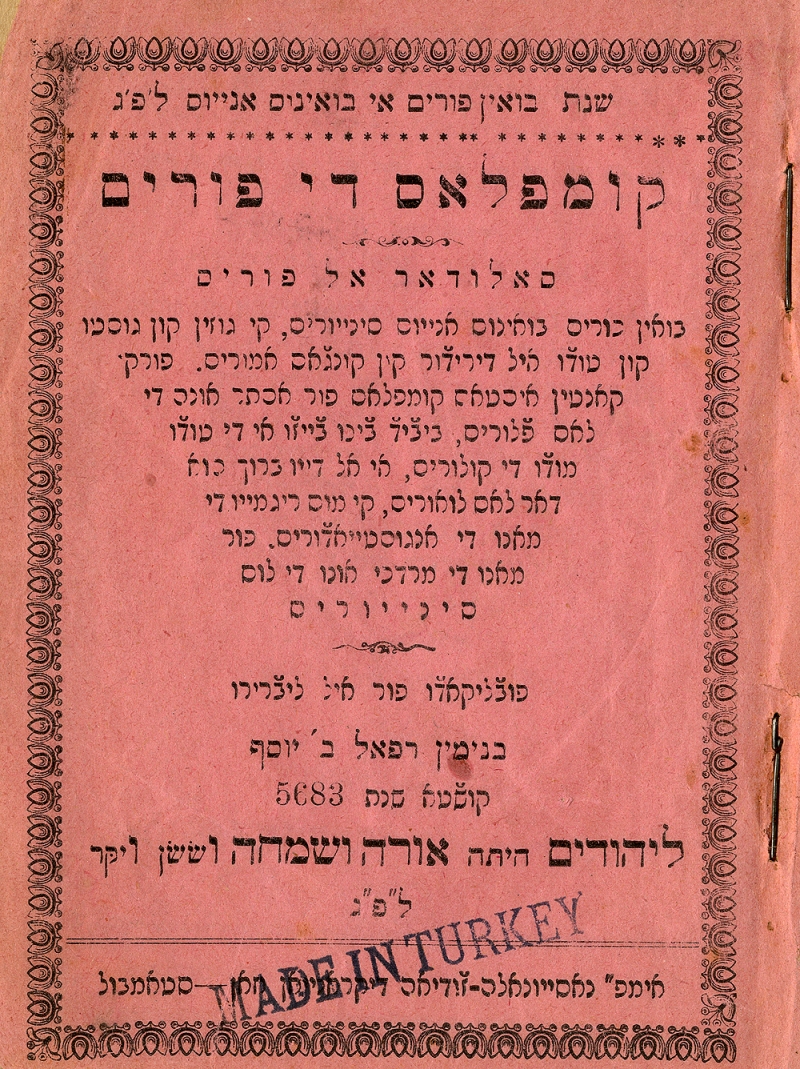 Such songs formed part of an extensive corpus of rhymed, Ladino poems known as koplas (or komplas) developed by Sephardic Jews in the Ottoman Empire. Arranged in stanzas, often with refrains, sometimes as acrostics, and intended to be memorized and sung in groups during moments of recreation and celebration, mourning and lamentation, koplas dealt with myriad Jewish themes, including holidays, faith, history, morality, life cycle events, religious practices, folkways, hopes and fears, and politics and satire. Initially composed by rabbis, who sought to make traditional Jewish knowledge more accessible to the Jewish masses in their spoken language, and later by popular authors, koplas served as a foundation of Sephardic Jewish culture for generations.

Perhaps the most famous genre of koplas dealt with the holiday of Purim. Several forgotten drinking songs for Purim are preserved in two books in our Sephardic Studies collection. Notably, several copies of each of the two books have surfaced—a testament to how widespread these koplas once were.

Isaac Azose, Hazzan Emeritus of Congregation Ezra Bessaroth, shared with us Komplas de Purim: Saludar el Purim, printed in Istanbul in the Hebrew year 5683 (1922 or 1923). Published by Benjamin Raphael ben Yosef, one the most prolific printers of religious and secular books in Ladino and Hebrew in the Ottoman Empire during the early twentieth century, Komplas de Purim, with its bright pink cover, introduces readers to its contents in an equally colorful manner:

Happy Purim, good year, sirs, may you delight with gusto,
Together with those all around, with flower buds of love.
Sing these komplas for Esther, one of the flowers.
Drink old wine of all varieties, and to God, blessed be He,
give praise, for He redeemed us from
the hands of our persecutors, through
the hand of Mordechai, one of the
men 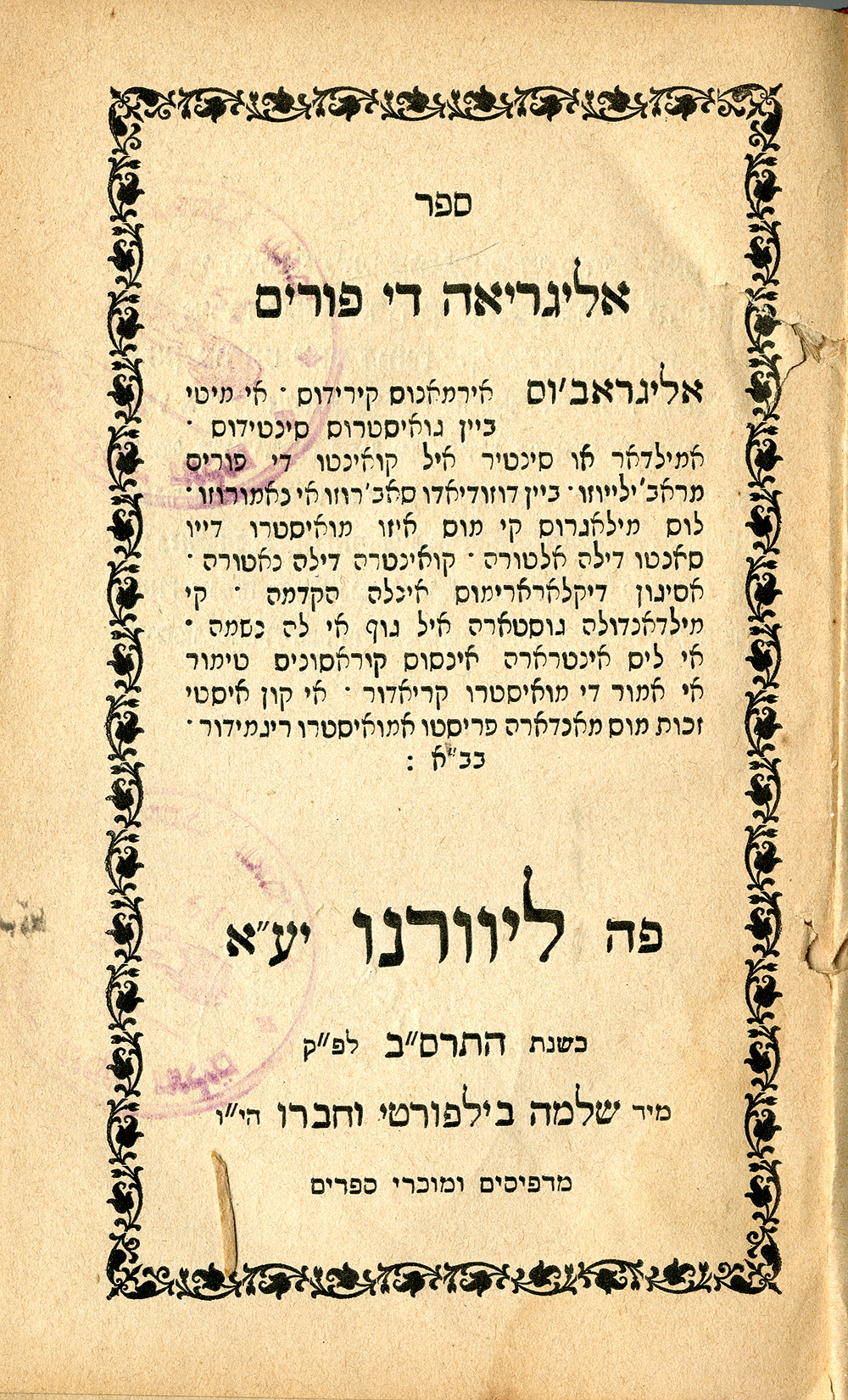 The Sephardic Studies Digital Library also has several copies of Sefer Alegria de Purim, published in Livorno in 1902 by the well-known printing house established in the nineteenth century by Solomon Belforte (1806-1869). That such a book was published in Italy demonstrates that cultural links tied together Sephardic Jews in Italy and the Ottoman Empire during the early twentieth century.

Rabbi Solomon Maimon of Congregation Sephardic Bikur Holim donated one copy of Sefer Alegria de Purim whereas another comes from the library of the late Sam Bension Maimon. An inscription in the latter book reads, “The material, poems, and prose-like compositions here were authored mostly by a certain Ribi Ya’akov Uziel and by Ribi Yom Tov Magula and others.” Uziel and Magula numbered among the most famous composers of koplas in the Ottoman Empire in the eighteenth century and their verses continued to accompany the celebration of Purim into the twentieth century. The full text of both of these songbooks are now available online as part of the Sephardic Studies Digital Library and Museum at the University of Washington.

Get the neighborhood together,
Drink and get drunk,
Get up to dance,
For thus is our duty.

Refrain:
Long live the king,
Long live I,
Long live all the Jews,
Long live Esther the queen,
That she gave us so much pleasure.

Drink the wine by the gallons,
Many cookies and pastries,
That the mouths should not be still,
From eating and drinking

The Europeans make partridges,
Good snuff
To enjoy dried chickpeas,
Which is an appetizer for drinking.

Some rabbinical authorities discourage heavy drinking on the grounds that it is not befitting the Jewish community. Interestingly, in the past another popular custom that continues to this day was highly discouraged: excessive noise making during the megillah reading over Haman’s name. While today children and adults use noisemakers and horns in addition to stomping and pounding, in nineteenth century Rhodes, chief rabbi Rahamim Yeuda Israel condemned the practice. Rabbi Israel tried to put a stop to the ruckus, claiming that it degraded the Divine Presence, stoked enmity with Christian neighbors and the Ottoman government, made a mockery of the Jewish people, violated the commandment of avoiding needless waste, and prevented others from hearing the megillah.

“…on Purim during the reading of the Megilla at night and in the day, when they bang incessantly, as this was the custom in our city for many years to bring slabs and sticks of wood to the synagogue while the children come, each one with his hammer. They practically split the ground with the sound they make during the Megilla reading so that just about a majority of the congregants cannot hear the Megilla reading, as is necessary. Even the adults’ ‘feet run to commit evil’ when they bang with all their might” (from Rabbi Yossi Azose’s translation of Rabbi Israel’s teshuva forbidding the custom of noisemaking, found at this link on the website of Congregation Ezra Bessaroth).

Apparently, Rabbi Israel didn’t win this battle, but Seattle Sephardim don’t cause nearly this much damage — perhaps because they’ve done away with “drinking wine by the gallons”? Whatever the causes for a happy Purim celebration, we wish you:

Happy Purim, good years,
May we have joy
Every year!

* We have done our best to find out what these Turkish candies were. If you know more, please let us know in the comments!

Halva de susam: sesame candy
Loucoum: Turkish Delight (gel, starch, sugar, chopped dates and nuts)
Pitas de susam: sesame in filo
Pitas de kaymak: some type of cream puff? Kaymak means cream, but it may also mean “delicious” or “tasty.” According to Hazzan Isaac Azose, the word pita has nothing to do with pita bread, but rather it’s kind of like a crust, white and hollow inside, in the shape of a round triangle that comes to a point, made with lots of sugar.

Want to see more articles like this?  Sign up for our newsletter!
⇒ Learn more about the Stroum Center for Jewish Studies at the University of Washington, our Sephardic Studies Program, or our Israel Studies Program.
Note: The opinions expressed by faculty and students in our publications reflect the views of the individual writer only and not those of the Stroum Center for Jewish Studies.
By Ty Alhadeff|2018-02-27T09:32:19-08:00February 26th, 2015|Categories: Digital Sephardic Treasures, Global Judaism, Sephardic Studies|Tags: American Jewish Community, History, Jewish Holidays, Ladino, Purim, Religion & Ritual, Seattle, Sephardic|13 Comments