Earlier this month the New York Times devoted its weekly restaurant review to a sleek newcomer in Tribeca that features dishes such as wild halibut gefilte fish (with “parsley vinaigrette”) and wild mushroom kreplach (with “olive oil schmaltz,” whatever that is). If you hadn’t noticed the renaissance in Jewish food, the review of Kutsher’s—named in homage to the famed Borscht Belt resort—this was the best evidence yet. 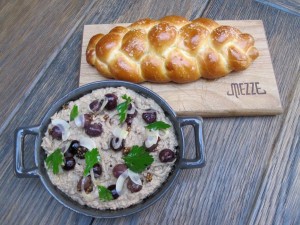 In the past few years restaurants reclaiming or reinventing Jewish foods have opened up across the country, including Portland’s Kenny & Zuke’s, which features the rarity of entirely house-made pastrami, knishes, and other deli fare, or, similarly, Chicago’s Eleven City Diner, which also boasts an in-house “soda jerk” (as well as artisanal coffee provided by Intelligentsia). Top Chef winner Ilan Hall has garnered much praise for his bacon-wrapped matzo balls at his downtown Los Angeles restaurant, The Gorbals, and recent Hollywood newcomer Micah Wexler, of Mezze, has devised several nods to Jewish cuisine on his menu, including a dish he calls “Grandma’s Chopped Chicken Livers, Apple Mostarda, Challah” (with all due respect to my own grandmothers, it’s one of the best versions I’ve ever had). Finally—and this list is by no means complete—at Brooklyn’s Mile End deli, you can feast on kasha varnishkes made with “duck confit, chicken and veal meatballs, gizzards, and gribenes.”

Lest I remind you, it’s 2012, not 1912. Clearly Jewish food—at least iconic, east European Ashkenazi food—is having a moment, and, if the press frenzy and lineups at these places are any indication, it’s not just Jews that are revisiting their own past, imagined or not. Wider audiences are suddenly interested in the foods many Jews grew up on, or at least that they wish they had. Suddenly blintzes and knishes are all the rage, even if dishes are reinterpreted with ricotta in place of farmer’s cheese or quinoa instead of kasha. Some of these foods are even emerging from non-Jewish chefs in otherwise non-Jewish restaurants. Celebrity chefs Mario Carbone and Rich Torrisi, of the James Beard award winning-restaurant Torrisi Italian Specialties in Lower Manhattan, chose ‘Jewish lamb’ as the subject of their first video highlighting a menu item of the same name with a Manischewitz glaze.

Meanwhile, during the same period when this trend emerged, interest in the Jewish Food Movement—which emphasizes sustainable food practices and Jewish learning and community building through food—has also grown dramatically. In the past five years many Jewish farms dedicated as much to growing food as to education have emerged, as have organizations such as Mitzvah Meat, Kosher Conscience, Grow and Behold Foods, Kosher Organics, and others described on Huffington Post by Ari Hart, Co-founder of Uri L’Tzedek (Awaken to Justice): Orthodox Social Justice.

The largest organization leading many of these activities is the Jewish environmental organization Hazon, which provides community supported agriculture programs (CSAs) to Jewish communities across the country, an annual food conference, grants, and online resources intended to help individuals and communities experience “greener” Jewish holidays and life cycle events through food choices. For the recent holiday celebrating the early spring New Year of Trees, Hazon created a resource page under the lengthy heading:  “What might an ecologically-inspired, spiritually-tuned-in, multi-generational non-denominational Tu B’Shvat Seder look like – and how can I host one?” This may be a question only a few would ask, but elements of it are appearing at Jewish holiday celebrations across the country. In sum, you’d be hard pressed not to find kosher organic food in most Whole Foods stores across the country today.

Yet whereas the Jewish Food Movement emphasizes religion, or at least spirituality, New Jewish Food (my name for it) is ironic and playful and not concerned with religion per se (cheese blintzes and duck pastrami might be competing menu items at some restaurants, never mind Torrisi’s ‘Oysters Rocafella,’ named after Jay-Z). The latter finds itself mainly in restaurants of urban America, the former on farms and kitchen tables across the country. Yet both are bringing unprecedented attention to Jewish food and directly or implicitly questioning what it means to eat Jewishly today.

This week Hazon’s founder and Executive Director Nigel Savage will speak on Religion’s Place in Food Politics here at the University of Washington, and I wonder what he makes of this turn in Jewish food culture. Although New Jewish Food and the Jewish Food Movement approach consumption differently, both call attention to Jewish eating and pick up on larger social trends in dining and cooking, from interest in ethnic cuisines to locavorism. So are they all that different? Is there an appetizing middle ground between them?

Lara Rabinovitch is HEEB Magazine’s Food Editor and a PhD Candidate in modern Jewish history at New York University. To see more of her work visit her website or follow her on Twitter.