How menschy is the Mensch on a Bench? 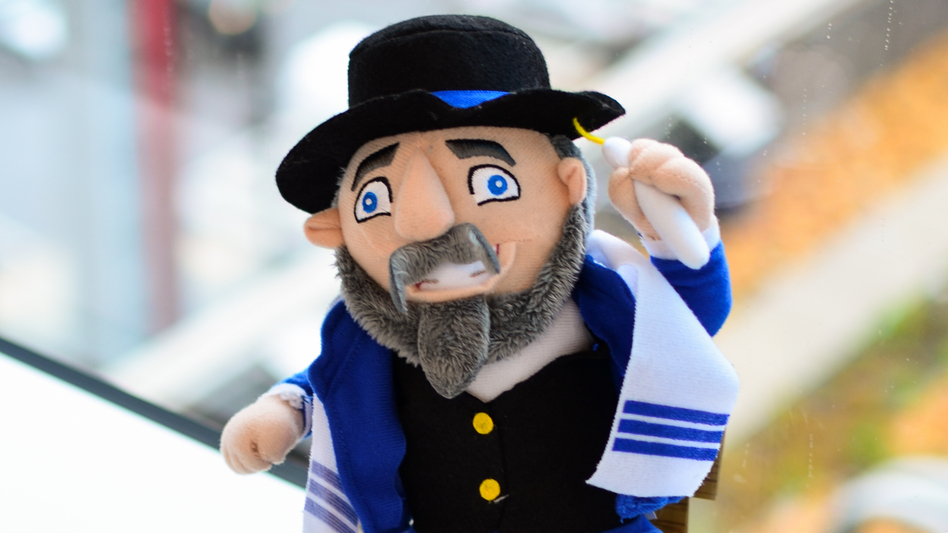 This year’s Hanukkah toy sensation, The Mensch on a Bench, brings shtetl nostalgia into the Hanukkah story.

Moshe the Mensch is ready for his selfie, but are we ready for another Hanukkah mascot?

The Hanukkah toy sensation, The Mensch on a Bench, started out last year as an explicit homage to the popular Christmas toy, The Elf on the Shelf. According to that toy’s lore, every scout elf adopted by a family can fly back and forth between the family’s home and Santa’s workshop at the North Pole. Neal Hoffman, who used to work for the toy company Hasbro, wanted to give his son a similar, but Jewishly-appropriate, holiday visitor.

And a mensch was born.

Hoffman named his creation—what else?—Moshe. Like his elfin model, Moshe has a backstory and a higher purpose during the holiday season. The Moshe mythos (available in handy book form) places black-hatted, tallit-wearing Moshe at the heart of the ancient Judean action after Judah and the victorious Maccabees have returned to the Temple. Seeing how tired they are, Moshe offers to sit on his bench and watch over the oil while the warriors sleep.

By inserting his frum-looking Moshe into the middle of the Maccabees’ swords-and-sandals epic, Hoffman has, perhaps unknowingly, created a human embodiment of the shamash—the “servant” candle that lights and guards the others. With his undeniably Orthodox attire and cozy beard, Moshe strikes me as an Eastern European delegate from the Diaspora shtetl future, transported to the holy land past to help make the Hanukkah miracle happen.

His superpower? The ability to sit for really long periods of time. Take that, the Hebrew Hammer!

Shtetl Culture as a Marketing Tactic

Hoffman’s kid-friendly midrash on the Hanukkah story might not fly with purists of the pseudepigrapha, but it has spelt gelt for the timely toy inventor. Riding the tide of a successful Kickstarter campaign, Hoffman has parlayed public demand for his Mensches on Benches into a flourishing business that promises to “Add more FUNUKKAH to your HANUKKAH!” The toy is inherently social media-friendly and selfie-ready, as evidenced by the Mensch’s 10,000-plus likes on Facebook.

The nostalgic trappings of Yiddish and shtetl culture are clearly a part of Hoffman’s marketing aesthetic. As I explore the Mensch on a Bench website and click away from the purchasing page, a popup window implores me with the classic Yiddish cry of anguish: “Oy Vey, don’t go yet!” and offers me a 10% discount code (“oyvey”). Hoffman’s Moshe, if he doesn’t speak straight Yiddish, likely does speak Yeshivish.

And the very name of the toy utilizes perhaps the central moral concept in Yiddish vocabulary: menschlichkeit, or humanity. Which led me to the question, How menschy is the Mensch on a Bench, anyway?

The Moral Meaning of Menschiness

Let’s get etymological for a second. The Yiddish word mensch (which can also be transliterated as mentsh) derives directly from Mensch, the German word for man. In Yiddish, its most direct meaning is simply that, a man or a human being. Yet the Yiddish word mensch also encompasses the semantic terrain of moral uprightness, goodness of character, integrity, and civility.

As the Forward’s Philologos pointed out in a 2010 column, German does not layer on this secondary meaning: “To be a Mensch in German is to be an ordinary person rather than an exceptional one.” In the Yiddish cultural universe, however, being a person is inherently wrapped up with being a good person; human existence comes with a clear ethical obligation to other people. The imperative expression, “Zay a mensch!” (“Be a good person!”), was the 11th commandment for Jews trying to make their way in the modern world.

A perfect summary of this moral worldview can be found in Joseph C. Landis’ chapter on Yiddish in Understanding Jewish Theology: Classical Issues and Modern Perspectives. Landis calls Yiddish “the translation into language of the ethic of Ashkenazi Jews” and explains that ethic as mentsh-centric: “Dedicated as it thus was to the values of the head and the heart, to Torah and maysim tovim [/fusion_builder_column]

[good deeds], the Ashkenazi world was one whose ethic could indeed be called the ethic of mentshlekhkayt. In the word mentsh it found the summation of its strivings. It could not conceive of being a Jew without being a mentsh . . . .”

In calling his Hanukkah must-have toy The Mensch on a Bench, it seems Neal Hoffman has dipped his toe into somewhat deep psycho-religious territory. Does Moshe the Mensch hold up to this centuries-old Jewish standard of upstanding behavior? 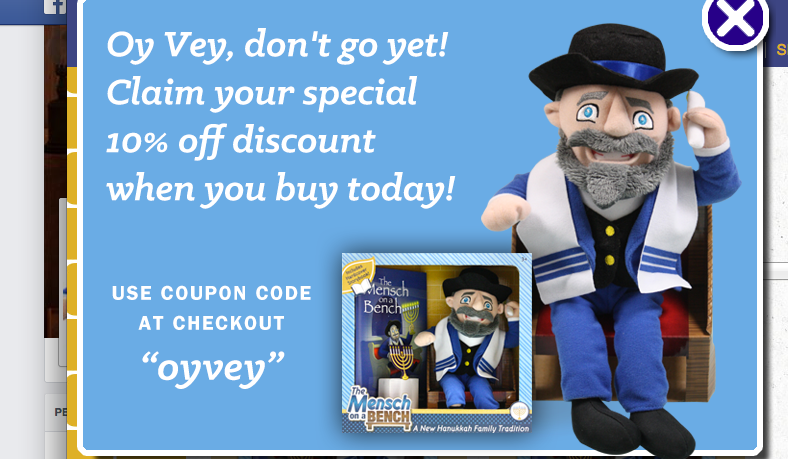 The discount code for The Mensch on a Bench? Oyvey, of course.

To Hoffman’s credit, the list of Mensch Rules (another piece of this post-modern Mensch’s lore) does encourage young acolytes to be compassionate towards others. Rule #7: “One night of Hanukkah don’t open presents yourself, instead buy presents and give them to people in need. Remember that a true Mensch is one who puts smiles on other people’s faces.” Rule #2 also exudes Jewish values: “Enjoy this holiday with your family…have fun…make your own traditions.” And Rule #6, which encourages young ones to share their Mensch photos with friends every night, suggests a new Jewish American ritual for Hanukkah: eight silly selfies.

Moshe’s purpose in Hoffman’s revamped Hanukkah tale is undeniably menschy, too: assessing the post-battle situation at the Temple, Moshe acts upon his inner ethical urge to be responsible for the welfare of others. As a result, menschlichkeit takes center stage in a narrative that, to this point, has revolved around the optics of armed rebellion. It takes some chutzpah to retrofit the Maccabees’ story with the Ashkenazic moral worldview, to insist that the modern mensch’s particularly Jewish humanism has a rightful place in ancient times, too.

Is Moshe the Mensch’s shtetl shtick a canny marketing ploy, an earnest attempt to teach kids about Jewish values, or a little of both? Regardless, it’s hard to argue with a toy that is encouraging children to engage with the story of Hanukkah, to share their excitement with others, and to learn a bisl (tiny bit of) Yiddish along the way. If that excitement comes cloaked in a “limited-edition” blue tallit for sale on Zulily, so be it. I’m already getting ready to scoop up next Hanukkah’s toy sensation: The Maidel with a Dreidel.

Want to see more articles like this?  Sign up for our newsletter!
⇒ Learn more about the Stroum Center for Jewish Studies at the University of Washington, our Sephardic Studies Program, or our Israel Studies Program.
Note: The opinions expressed by faculty and students in our publications reflect the views of the individual writer only and not those of the Stroum Center for Jewish Studies.
By Hannah Pressman|2018-09-06T11:01:15-07:00December 9th, 2014|Categories: Global Judaism|Tags: Hannah Pressman, Religion & Ritual, Yiddish, Yiddish in the World|1 Comment