“Totes Koshe” T-shirts and the Rise of Cheeky Yiddish Leisurewear 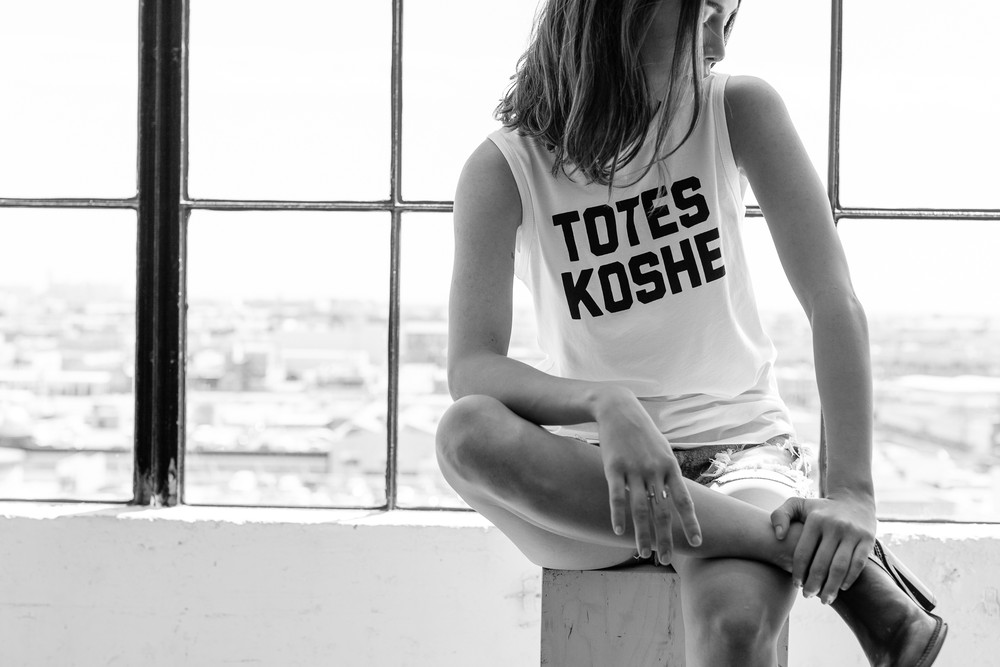 The saucy line of $48 sleeveless tees, designed by Alice Blastorah and Shiran Teitelbaum of Unkosher Market, boasts the following: “Our fabric is sourced and sewn in Los Angeles with 100% cotton and 100% chutzpah. Deal with it.” A seamless weave of in-your-face Jewish attitude AND 100% cotton? Get me to a fitting room!

As a recent profile in The Guardian explains, the Unkosher Market line is perfect for that “self-deprecating Jewish hipster of mid-level means” in your life. I think there is something else going on, though, both in terms of the way Jewish language is used and female sexuality is deployed to market these tops. Hear me out. 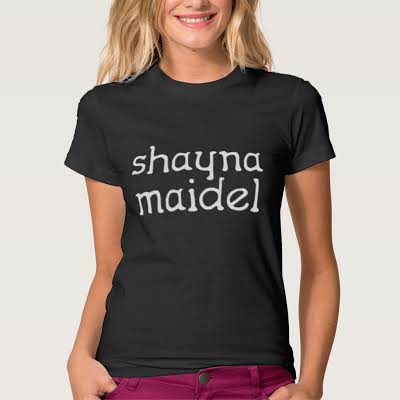 From zazzle.com, a t-shirt declaring oneself a “pretty young girl” in Yiddish.

The cheeky use of Yiddishisms and vaguely Borscht Belt-sounding phrases is nothing new in contemporary American Jewish culture. For the better part of two decades, young urban Jews have been ironically co-opting Yiddish and Hebrew phrases that their parents and grandparents, anxious to assimilate, might have been embarrassed to say in front of mixed company. This situation changed noticeably during my young adulthood. Sparkly pink t-shirts declaring oneself a Shayna maidel (“pretty young girl” in Yiddish) or “Jewish Princess” were easy to find in West Village novelty stores during my grad school years in the early 00’s; faux-retro books like Yiddish with Dick and Jane (2004) were displayed prominently at Barnes and Noble (admit it, Amazonians: you miss B&N just a tad).

Perhaps the most noteworthy and edgy example of this movement to proudly reclaim Jewish identity through linguistic gestures is the rise of Heeb Magazine, founded in 2001. The name itself is a slur against Jews based on the word “Hebrew.” Heeb‘s mission statement reads in part: “Covering arts, culture and politics in a voice all its own, Heeb has become a multi-media magnet to the young, urban and influential.” That singular voice relies heavily on bold use of language that might make readers just a little uncomfortable, but the magazine revels in the frisson of taboos being crossed. Heeb‘s slyest rhetorical move is to turn those linguistic signifiers of ethnic discrimination into unvarnished tokens of coolness. To whit: an October 2010 style column had the headline, “Fall Fashion for Japs: The Return of the Urban Cowgirl.” (Please note, I understand that such words are offensive to some; I mention them in the service of trying to understand the bigger questions around younger Jewish generations’ use of linguistic taboos.)

Part of this phenomenon, doubtless, is the expansion of the Jewish-English lexicon, a sociolinguistic development traced in the groundbreaking work of Hebrew Union College’s Sarah Bunin Benor. Prof. Benor, a recipient of the Sami Rohr Choice Award for her 2012 study “Becoming Frum,” has been a trailblazer in the study of Yinglish, a sub-dialect of American English particular to Orthodox Jewish communities. In a 2013 interview with the Jewish Press, Benor explained that the embrace of Jewish-sounding words and phrases, those that are obviously derived from Yiddish, Hebrew, or the Hebrew-sourced element of Yiddish, could be partly explained by one’s generation: “Children of immigrants . . . are more willing to sound distinct. It might be partly greater pride in their distinctive identity – or greater comfort in being American but also being something else.” Surveying the offerings at Unkosher Market, Benor observed that nearly all the tees feature Yiddish words that are based on the Hebrew component of Yiddish–which leads me to wonder, is there something about the loyshn-koydesh (holy language) layer of Yiddish that sounds especially Jewish and ripe for the punning?

The proud display of Jewish-sounding words even extends to the humble tote bag. Tablet Magazine has offered a series of tote bags bearing retro Yiddish-y phrases like “I’m Kind of a Big Macher.” As this Philologos column in the Forward has explained, macher is hard to render precisely in English; drawing on the Yiddish verb makhn (to make or to do), macher basically means “someone who . . . makes it his job to get other people to do things.” Yet there is a level of cultural specificity attendant to macher-hood that gets lost in translation. Much like the Yiddish word mentsch–which I wrote about here last year, and which also appears on Tablet tote bags–macher conveys a whole worldview upon interpersonal relationships that is rooted very specifically in the culture of the shtetl, what the seminal linguist Max Weinreich called “the Ashkenazic reality.”

These very Jewish words, which come embedded with various histories both negative and positive, now appear on leisure wear and luggage, trucker hats and ipod cases, magnetic poetry and commuter mugs. Yet their original contexts–the cultural narratives, personal memories, social taboos, and external prejudices they may connote to different audiences of different ages–sometimes get lost in the process. Should the commodification of Jewish words be celebrated or denigrated? Should we care if “Shayna maidel” gets silk-screened onto a zazzle.com t-shirt, complete with English letters engineered to look like Torah scroll font? Do we care differently if that phrase is an ethnic slur?

“Shmattes”, curated by Anne Grant, is provocative exhibit of contemporary clothing that helps viewers navigate precisely those questions. Shmattes is the Yiddish word for rags, a term of disparagement though sometimes endearment as well. A Jewish Studies major at the University of Virginia (full disclosure: my alma mater as well), Grant is now a graduate student at Yale Divinity School. She started a T-shirt collection that now numbers over 150 items from, as her website says, “all over the American Jewish landscape . . . that represent the multifaceted and hybridized identities of culturally Jewish people in America.” In a March 2015 interview with the Cavalier Daily, Grant explained that visitors to the “Shmattes” show interpret the clothing based on their “‘positionality,’ or place in the Jewish world.” The exhibit has so far shown at the UVA Brody Jewish Center as well as Brown/RISD Hillel – here’s hoping it visits Hillel UW next.

In a turn of phrase that has become widely influential in the field of Yiddish Studies, Rutgers University scholar Jeffrey Shandler suggested in his 2006 book that the current age is one of “post-vernacular” connection to Yiddish. Although lacking a speech community wherein Yiddish is the language of everyday life, individuals can nevertheless forge a relationship with the Yiddish language and its culture. This engagement with Yiddish happens on the symbolic level. It can come in the form of listing to klezmer music, eating Ashkenazi food, or other symbolic acts–like wearing a saucy t-shirt.

Which brings us to “Kiss My Tuchis” and “Matzah Ballin’,” two among the half-dozen Jewish-sounding phrases emblazened upon those Unkosher Market tees. The brand’s “100% chutzpah” extends to a marketing image in which a female hand reaches out to another model’s, um, tuchis (rear end–a Yiddish word that itself derives from Hebrew word tachat, or bottom). In the wake of American Apparel’s toxic and exploitative marketing campaigns, do we really need leggy women in short denim cutoffs to advertise these good-humored, winking takes on words your grandparents knew and loved? 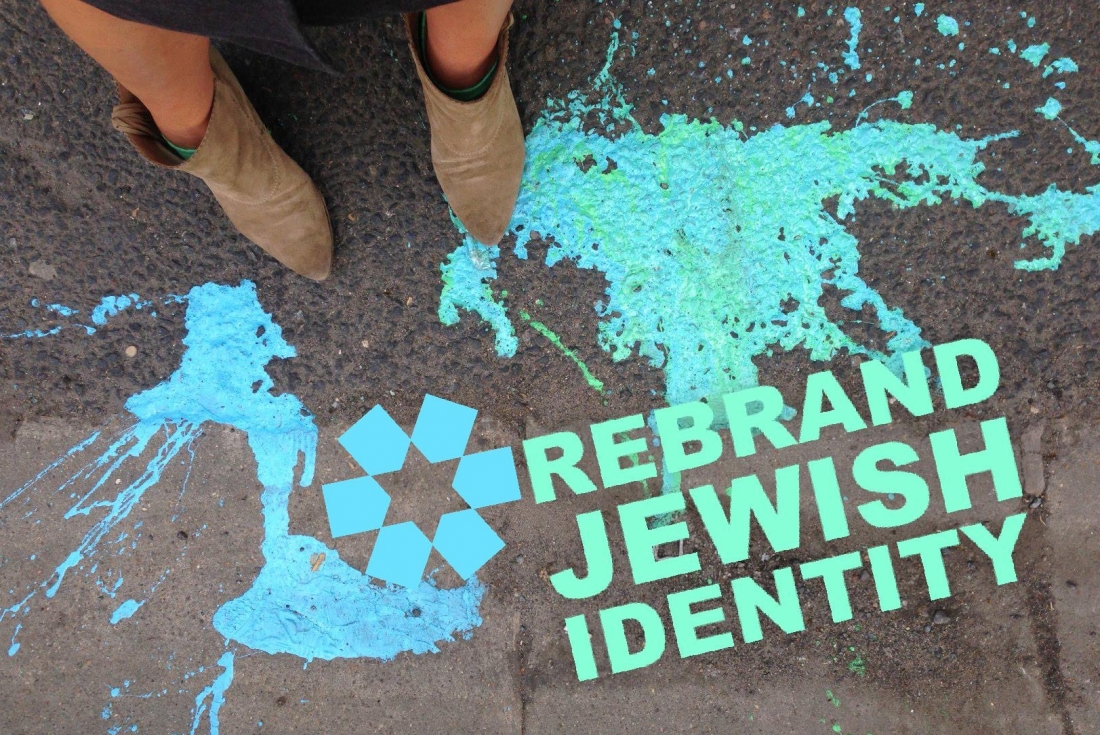 A photo from the Facebook page of Risk Oy, a Polish clothing company that sells items with Jewish symbols and expressions of Jewish pride.

That’s the precisely the point, though–in the 21st century, those Jewish-sounding words are no longer offensive, taboo, or a source of cultural shame. Instead of signifying self-hatred, these words now symbolize sex appeal. Knowing who you are is sexy. Being proud of your lineage is sexy. Sprinkling your daily conversation with a bisl (a little) Yiddish? Definitely sexy. (See what I just did there?) Wearing a slogan on your t-shirt or tote bag is a way of branding, or rebranding, one’s identity; you can change your shirt as quickly as you change your Facebook status.

I should say, also, that I am limiting my analysis here to the American Jewish environment I know best. It’s worth mentioning that the fashion scene in Europe is also tapping into the desire to celebrate Jewish identity through words and symbols, the star of David most prominent among them. Poland’s Risk Oy company has received the most attention for their efforts, in this Tablet profile and a Times of Israel article stating, “Polish fashion entrepreneur makes being Jewish sexy.” It goes without saying that wearing a plush hoodie sweatshirt with stars of David on it has a different resonance in post-Holocaust Poland than in Chicago or LA.

“Totes Koshe,” for what it’s worth, achieves a few different things in one pretty smart semantic package. “Totes” is a relatively recent piece of American English slang that is short for “totally.” “Koshe” is shorthand for the English pronunciation of an ancient Hebrew word, kasher / kosher, which means “fit to be eaten according to Jewish dietary laws” (good explanation of the Hebrew root here). “Kosher” has the secondary meaning, popular in general American English, of everything being legitimate. And as a finishing touch, the two words slightly rhyme, and the phrase therefore remains more memorable. I have a feeling that if Tablet offered a new tote bag with the “Totes Koshe” slogan, it would be a best-seller.

The appearance of Jewish-inflected slang on clothing achieves a two-fold impact on the beholder: as they see the words, they hear them internally and, if they don’t know the meaning, might be tempted to ask. From internalized Jewish self-censorship, to stylistically provoking a cultural dialogue on Jewish languages: we’ve come a long way, bubbe. Now, for $48, you too can dare your friends to kiss your proverbial tuchis, and in so doing proclaim yourself free of anti-Jewish societal taboos. Totes koshe, indeed.

Want to see more articles like this?  Sign up for our newsletter!
⇒ Learn more about the Stroum Center for Jewish Studies at the University of Washington, our Sephardic Studies Program, or our Israel Studies Program.
Note: The opinions expressed by faculty and students in our publications reflect the views of the individual writer only and not those of the Stroum Center for Jewish Studies.
By Hannah Pressman|2018-09-06T10:58:00-07:00October 30th, 2015|Categories: Arts & Culture|Tags: Hannah Pressman, Hebrew, Yiddish, Yiddish in the World|1 Comment