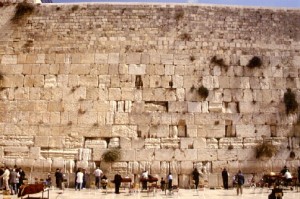 There’s been a lot of buzz about gender in Israel lately, yet this debate is hardly new: arguments over women’s roles in the State of Israel can be traced backwards from the statehood era to 1948, into the era of the Palestinian Mandate, and even further back to Zionism’s very roots in the Pale of Settlement in Eastern Europe. Recently, however, several highly public incidents involving women’s exclusion from the public sphere have brought gender to the forefront of Israeli societal debates about civil rights and the role of religion in politics.

These incidents range in their scope and shock value: attempts to force women to sit in the back of the bus so that men can sit in the front; the banning (or physical desecration) of commercial advertisements featuring women; harassment of girls deemed immodestly dressed; women being barred from delivering eulogies at funerals; controversy erupting in the IDF (Israeli military) over whether female soldiers can sing in public ceremonies.

Another such cause celebre is Professor Channa Maayan, author of a book on Jewish genetic diseases, who journeyed to accept an award from the Israeli Ministry of Health and its Ultra-Orthodox minister, Yakov Litzman, in a government ceremony. Her treatment during the ceremony, covered widely in various global media sources, has raised anew the central question of whether Jews of different stripes can truly coexist in the state of Israel.

What will be the ultimate outcome of Israel’s Rosa Parks moment? Should the gender segregation essential to some Jewish groups’ worldview be applied to all citizens in Israel’s public sphere? What are the consequences of the compromises to be made in either direction? How can we, rendered by geographic location the audience to this drama, better understand the complex situation unfolding in Israel?

We have gathered a list of resources to help readers deepen their understanding of the issues at hand, following Joan Scott’s view of gender as “useful category of analytical analysis.” And, looking beyond the immediate shock value of some of the incidents that have already occurred, we might ultimately use Israel’s Rosa Parks moment as an opportunity to reflect on the historical longview as well. After all, Professor Maayan’s story forces us to reconsider not only the role of women in Israel and their relationship to citizenship and government, but also the historical narrative(s) of the State of Israel writ large. The comparative view offered by Moshe Halbertal, Professor of Jewish Philosophy at Hebrew University, is instructive: he suggests that, just as “secular nationalism and socialism posed challenges to the religious establishment a century ago,” now the force of feminism is really “the main issue that the rabbis are losing sleep over.”

Want to see more articles like this?  Sign up for our newsletter!
⇒ Learn more about the Stroum Center for Jewish Studies at the University of Washington, our Sephardic Studies Program, or our Israel Studies Program.
Note: The opinions expressed by faculty and students in our publications reflect the views of the individual writer only and not those of the Stroum Center for Jewish Studies.
By Sarah Zaides|2017-09-04T22:43:02-07:00February 8th, 2012|Categories: Israel & Hebrew Studies|Tags: Gender, Identity, Israel, Politics, Religious, Sarah Zaides|0 Comments