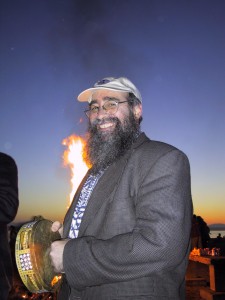 Martin Jaffee, Prof. Emeritus, interprets Ruth Calderon’s Knesset speech as a text in its own right–and is amazed by what he finds. Photo Credit: Andrew Krasnow.

Like many of those American Jews whose cultural and religious tastes align them (more or less comfortably) with the “Modern Orthodox—Religious Zionist” stream of contemporary Judaism, I was transfixed by the video of MK Ruth Calderon’s introductory speech to the Knesset last February. In fact, I was so taken by it that I immediately forwarded the YouTube version to some colleagues in the Stroum Jewish Studies Program, suggesting that it be circulated to the faculty as a topic for collective discussion. Not that it needed any help from me—having already gone “viral” on the internet before I clicked “send” on my note to colleagues. MK Calderon’s 15-minute talk has become by now “a text” par excellence, in the small, but still-growing, world of academic practitioners of Jewish Studies.

And, like all rich texts, it is open to far wider interpretive loops than the author probably imagined. Certainly, more than I—a “professional” reader of Jewish texts—could have imagined! Upon listening to the speech—which I went through several times, just to make sure I got it all—I  thought I heard a moving confession about the role of Talmudic study in the personal life of a recognizably “secular” Israeli politician. I thought I heard an important model for drawing upon some of the textual practices of contemporary Talmudic studies to enable Israeli educators to enrich what has become either a doctrinaire and unreflective secularism among Israel’s intellectual elites or, worse still, the stultifying fundamentalism of the rabbinic establishment, for whom Torah has become a stick to beat people over the head with, rather than “a Tree of Life to those who cling to her.” I thought, moreover, that I heard in MK Calderon’s talk, an appeal to a humanistic, non-triumphalist Zionism that was attempting to regenerate the mission of Jewish nationalism in the context of religious, cultural, and political pluralism.

Finally—and here I must ask myself, “What Was I Thinking?”—I understood MK Calderon’s talk as an appeal for the ascendance in Israeli culture of a pluralistic model of Jewish diversity, indebted, in many ways, to the “Culture-Protestantism” platforms of European Christian liberals in the early 20th century, and familiar to most American Jews as simply a matter of  “personal religious freedom.” Could it be that Zionism, having been hijacked for decades by the ideologues of the Right, might yet be “re-hijacked” by the one living cultural artifact of European religious liberalism? Imagine, now, my surprise as I learned of the range of reactions to the speech coming from various sectors of Israeli public opinion!  What I had welcomed as a long-awaited sign of political sanity from the most “enlightened” sector of Orthodox Israeli thinking, was heard by many others as a disingenuous bid to smuggle a starkly exclusivist nationalism into Zionist education under cover of sentimental appeals to Talmudic culture!

Apparently, I heard wrong. Go figure! Well, what lessons do I derive from my error of interpretive judgment?

Perhaps the most sobering lesson concerns the apparently total disconnect, running entirely through the cultures of Jewish modernity, between “religious” or “secular.” For many on the Left, MK Calderon’s talk was deeply flawed for what she indeed failed to discuss: a way to engage Palestinians and Israeli Arabs with Israeli Jews, in the project of creating a vibrant, informed, and reflective civic culture in Israel under the banner of something called “post-Zionism.”

For others, MK Calderon’s fault lay in her simple trust that the wisdom of Jewish tradition might still inform the construction of a genuinely just—dare I say, even righteous—social order capable of nourishing the lives of all its citizenry. As if various models of socialism, quasi-fascism, and recipes for nationalistic self-aggrandizement (under the guise of messianic longing), had already not proven their ideological mettle as platforms for the creation of “the New Jew”!

So, to sum up: MK Calderon’s critics have argued that she chose to expatiate either on the wrong topic, or on the right topic in the wrong way. Her real topic, I submit, is exactly what it should have been: what is to be the shape of any Zionism that emerges from whatever will one day be called “peace” between a Jewish and an Arab state sharing parts of the historical Jewish patrimony of the Land? Is it to be a Zionism  nourished in the historical soil of Judaism’s commitment to Torah as the point from which all Judaic discourse has its roots? Shall that commitment be responsive to the cultural realities within which a Jewish State must live? What is “Jewish” in Zionism, and is that “Jewishness”—whatever its content—compatible with a simultaneous commitment to to the highest ideals of democratic polities throughout the world? Finally, and most importantly: if there is no future to “Zionism,” what is the meaning of Jewish political independence and what is the future of “Judaism” without it?

The cautionary criticism of MK Calderon’s words strike me, therefore, as more than a bit disingenuous. She addressed a major issue in Jewish national culture with creativity, sensitivity, insight and no small dose of courage. What more do we want of our politicians—that they be Messiahs?

Editor’s note: To find out more about the impact of Ruth Calderon and the Yesh Atid party, we suggest the following recent pieces from our web site:
Click here to read “Ruth Calderon’s Textual Revolution,” an article that includes the video of her Knesset speech with English translation, as well as links for further reading.
Click here to read “Secular? Moderate? Middle Class? Not Quite,” a piece questioning the inclusivity of Israel’s Yesh Atid party and the meaning of Ruth Calderon’s Knesset speech.