Learning about the Other 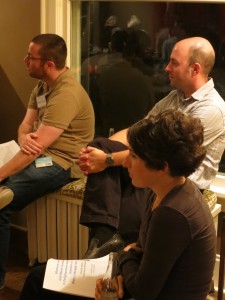 Jeremy Derfner, Joel Magalnick, and Naomi Goldenson, all members of JewDub’s Editorial Council, at this year’s Stroum Learn-in on “loving thy neighbor.”

Between some of the Jewish Studies learning opportunities this October, I find some related reflections. Yariv Mozer recently came to town for a Jconnect Seattle screening of his new film about gay Palestinians living illegally in Tel Aviv and seeking asylum abroad. In this year’s Stroum lectures, Professor David Ruderman presented an analysis of a late-18th-century encyclopedic best-seller on kabbalah and natural history. What they have in common is the theme of how Jews encounter the Other.

In his film, The Invisible Men, Mozer paints a devastating portrait of the lives of three gay Palestinians. They cannot live legally in Israel, and face deportation to the West Bank where they had been the victims of familial violence or targeted by the Palestinian Authority, and fear for their safety. Mozer allows his subjects to speak to us directly for a good portion of his hour-long film.

Mozer says his film is an implicit criticism of his government for not showing more sympathy to people like those he profiles. The gay Palestinians and Israelis portrayed, including Mozer himself, seem to relate to each other like models of co-existence in their personal interactions. Whether they have fled violence or not, whether they have always lived as citizens in liberal Tel Aviv or come from a village in the West Bank, their shared marginalization as gay men gives them a commonality.

Yet, despite the ways in which Mozer relates to his subjects as friends and fellow humans, this is clearly an encounter with the Other, subject to the biases and reference frame of the one editing the story. “Ramallah is only an hour from Tel Aviv,” he narrates, “but it feels like a distant country.”

[quote float=”left”]”Ramallah is only an hour from Tel Aviv,” Mozer narrates, “but it feels like a distant country.”

At a screening in San Francisco, Mozer talks to critics outside, just as he would later do in Seattle. He carelessly refers to Palestinian society as “primitive.” When I speak to him in Seattle he emphasizes their different-ness by using words like “traditional” instead. It’s hard for either of us to imagine what life is really like for Palestinians in the West Bank, just as removed from his experience as mine, despite his physical proximity.

A “traditional society,” writes Jacob Katz, is “a type of society which regards its existence as based upon a common body of knowledge and values handed down from the past.” I turn to his Tradition and Crisis: Jewish Society at the End of the Middle Ages after the first Stroum lecture, when I take to wondering what life was really like for Jews in the late 18th century. We can read history, but to really comprehend their experience is another thing.

Mozer acknowledges that homophobia is not unique to Palestinian society.  We agree that it exists everywhere.  He’s willing to criticize, in particular, religious society in Israel, before going on to generalize about the regimes of the Arab world.

Finding common ground is a challenge not only for Jews and non-Jews, but also within the Jewish community itself.

One of the nice things about the college experience, Ruderman muses at the Learn-in (discussed by Sarah Zaides in this JewDub blog post), is that Jews encounter Jews of varying backgrounds, from Orthodox to Reform, meet in Jewish Studies classes and at the Hillel, and come to know one another. When I was at college, I met all kinds of Jews for the first time who differed from those I knew growing up in my liberal suburban East Coast congregation. I met Jews who had been to Communist Jewish summer camp, Orthodox Jews – some of them anti-occupation activists, Jews who prayed at the Havurah, and many more who did not. I met a West Coast Renewal Jew, mixed-race Jews, and others whose Jewish identities were more complicated.

I also encountered Palestinians and other Arabs for the first time. Having heard them described primarily as irrationally anti-Israel, I would have been skeptical that we had much in common.  But we found common currency opposing the militaristic adventures our country launched post-9/11.

In this manner I also ended up with a lot of Jewish friends without trying, since my fellow peace activists were also disproportionately Jewish.  Where did our shared liberal humanistic values come from?

Ruderman argued in his Stroum lectures that perhaps there is a strain of “moral cosmopolitanism” present even in the center of traditional Judaism. Otherwise, how could a book like Hurwitz’s Sefer ha-Brit, with its long chapter on loving one’s neighbor, have found such wide popularity? Despite all of the persecution of Jews in Europe, a Christian prince is extolled by Hurwitz for his model of selflessness in the service of humanity.

What did it mean to hold up a non-Jew as a moral exemplar for Jews in pre-emancipation Europe? It's hard to imagine. 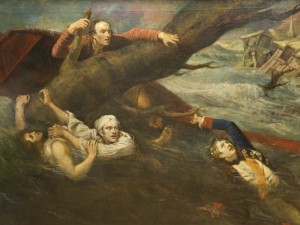 “The Death of Prince Leopold of Brunswick” (1785 / 1807), by James Northcote. The legend of this prince’s selfless behavior influenced a Jewish philosopher’s message of tolerance.

At one point in The Invisible Men, Louie expresses his grief over not gaining his father’s acceptance before his death. “I was hoping that one day I’d be able… to tell him ‘Forgive me, my father.  I was born this way.  Don’t turn my life into a disappointment.'” Similarly regretting his persecution and not his actions or identity, Abdu has hope: “Maybe things will calm down in a few years…Maybe they’ll think it over and forget the whole thing.”

These are men who aspire one day to return to live freely in their own land: free of homophobic violence and free of Israeli occupation. Their society is as much at the intersection of tradition and modernity as Jewish Israeli society. Their present realities are a tragedy familiar to queer youth the world over who run away from their intolerant communities and head for the big city that’s just far enough away.

If I come away from The Invisible Men imagining that Palestinians are all more alien to me than any of my fellow Jews, how universally am I really applying my values? How colored by communal loyalty is a film in which I am given only images of Palestinian victims and Israeli saviors? I recall the image in Sefer ha-Brit where a non-Jew demonstrates that ours is not the only ethical tradition, and sometimes morals trump identity.