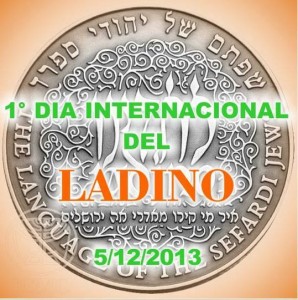 The official insignia of the first International Ladino Day, whose name quickly became a source of controversy. Image courtesy of esefarad.com.

Early in 2013, Zelda Ovadia of the Jerusalem Kol Israel radio program, which broadcasts in the traditional language still used today by some descendants of medieval Spanish Jewry, conceived and publicized an idea which at once focused world attention on the language of the Sephardim, and helped unite its widely dispersed speakers. She proposed that December 5th be recognized throughout the world as El Dia Internasional del Ladino—International Ladino Day, with day-long festivities to be held in Israel and in Diaspora Sephardic communities everywhere. Preparations for the event, and the celebration of the day itself, united many Sephardim worldwide, bringing to mind the Sephardic proverb: “Komo el ahaduth de los djudios no ay”—There is no unity like that of the Jews.

This unity lasted for about a day. The day after the celebration there came a backlash, predictable to those familiar with this community, well illustrating another Sephardic proverb: “Dos djudios en tres keiloth”—Two Jews require three synagogues (since, in addition to one’s own, one must have another synagogue which one would never deign to enter). The problem in this case revolved around an issue to which members of the modern speech community have been sensitive for years: how to call their language.

Since the 1970s, Professor Haim Vidal Sephiha of Paris, a linguist and himself a native speaker of the language, has insisted that the name “Ladino” only be used to denote the archaic variety of the language used since the Middle Ages for translating sacred Hebrew texts such as the Bible in a highly literal manner. For Sephiha, the expression “avlar en ladino” (to speak Ladino) is a contradiction in terms, since, to his thinking, one should only use “Ladino” in the context of artificial translations, never for ordinary, original speech.

On the other hand, Yitzhak Navon, fifth president of the State of Israel, and Moshe Shaul, vice-president of the Israel National Authority for Ladino Culture, which Navon and Shaul helped to found in 1997, use “Ladino” to denote the language of the Sephardim in all its varieties, written and spoken, and also use “Ladino culture” to denote the group’s cultural traditions.

The answer lies in the traditional Jewish tendency to distinguish between features which characterize Jews, and opposing features which are instead typical of the ‘other,’ the non-Jews. Similar distinctions were also made by other ancient peoples, such as the Greeks and Chinese.

What we know about Sephardic traditions of the past derives primarily from the writings of the group’s rabbis. They traditionally used the term “Ladino” in the same sense that they used the Hebrew word “La’az” (לעז) when writing in Hebrew: namely, “the foreign language of the ‘other,’ of another people, as opposed to Hebrew, our language, the language of the Jews.” In the Hebrew version of Psalms 114:1 we read “Be-tset Yisrael mi-Mitsrayim, bet Ya’aqov me-‘am lo’ez”—When Israel came forth out of Egypt, the house of Jacob from a people of strange (or foreign, non-Jewish) language,” i.e., Ancient Egyptian. The Sephardic rabbis translated the phrase “a people of foreign language” into the archaic variety of Jewish Castilian in which they traditionally translated the Bible literally as “puevlo ladinán”—“a people using Ladino” (which derives from Latin Latinus, denoting ‘Latin’), meaning the foreign (i.e., non-Hebrew) language used by the non-Jewish host group in the place and time in which Sephardic culture first arose, medieval Spain. (The selection of that word was probably helped along by the fact that “Ladino” sounded more like “La‘az” than other candidates for naming the language, such as “Romance” or “Español.”) 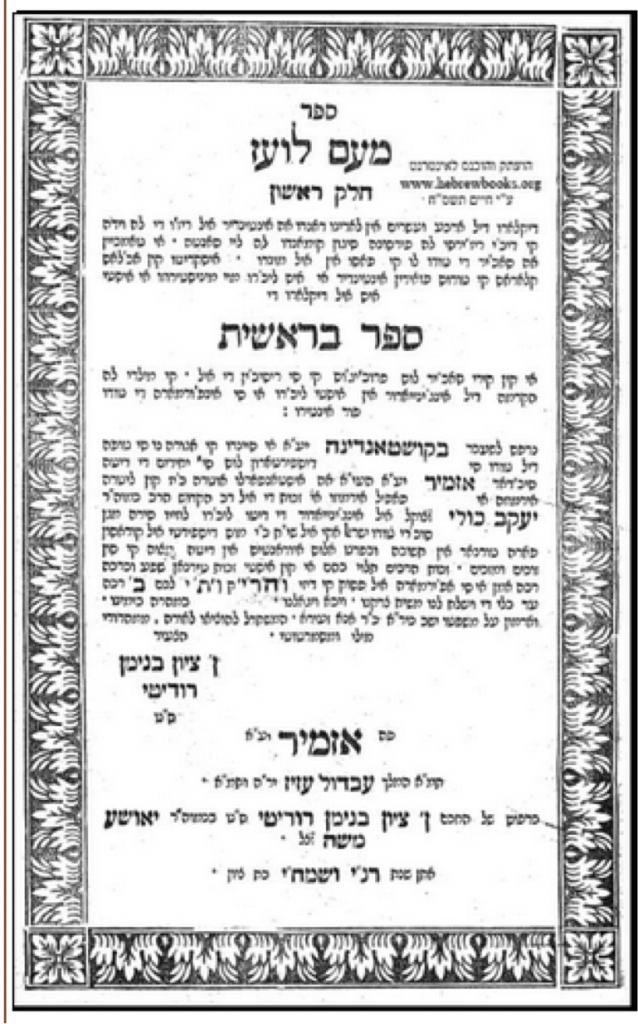 When writing original works in Hebrew, Sephardic rabbis sometimes used “La’az” in the sense of a written variety of their vernacular. For example, as when Rabbi Yosef Karo (b. Toledo 1488) deliberated in his Bet Yosef (Orach Hayyim 307) about the permissibility on the Sabbath of reading “sippure milhamot”—war stories—“bi-leshon ha-kodesh” (in the Holy Tongue, i.e., Hebrew) as opposed to those “ha-ketuvim bi-leshon La‘az” (written in the “foreign tongue” [i.e., in the Jewish Castilian of the Sephardim]).

But sometimes the rabbis used “La‘az” in the sense of the everyday language spoken by the Sephardim, as when Rabbi Moshe ben Hayyim Shabbetai of 17th-century Salonika reported, in his responsa collection Torat Moshe (Hoshen Mishpat, no. 10), on a case in which one person had asked another, in speech, whether or not to buy something, “we-hishiv lo … bi-leshon la‘az ‘Merka, ke kolay será ‘ ” (and the other answered him [speaking the words] … in the La‘az language “Buy it, because it will be easy”). Rabbi Nissim Hayyim Moshe Mizrachi of 18th-century Jerusalem, in his responsa collection Admat Kodesh (vol. 1, Yore De’a, no. 12), discussed the significance of certain words of “Reuven … ke-še-amar ha-devarim be-la’az she-perusham she-kibbel neziruto” (Reuven … when he said the words in La‘az the meaning of which is that he undertook to abstain from drinking alcohol). In all three examples—the first, a reference to written literary language, the second and third, to forms of the spoken language (the second, including the Turkish-origin word kolay ‘easy,’ often used in colloquial speech)—the language of the Sephardim was denoted in Hebrew by “La‘az.”

So, too, the Sephardic rabbis traditionally distinguished in their everyday language between “Ladino” (their vernacular equivalent of Hebrew “La‘az,” meaning their everyday, if “foreign-origin,” tongue) and “Lashón Hakodesh,” or simply “Lashón,” meaning Hebrew. They sometimes used “Ladino” to denote the archaic, artificial literal translation language referred to by Professor Sephiha, as when a bilingual edition of Pirke Avoth published in Belgrade in 1905 was described on its title page as being “en lashón i ladino” (in Hebrew and Ladino).

But they sometimes used “Ladino” to refer to spoken language. For example, as when Rabbi Yaakov Khulí, born in Erets Yisrael in the 17th century, wrote in his exegetic work Me-Am Lo’ez on Exodus (Constantinople 1733: 92a) that “Los misriyim … se yaman am loéz porke no savian avlar lashón akódesh si no en ladino” (The Egyptians … are called a people speaking a foreign language because they did not know how to speak the Holy Tongue but only in a foreign language [which, according to Sephardic tradition, Rabbi Khulí denoted by “Ladino”]). (It should be noted that, on the title page of his book, Khulí said that it was written “in Ladino,” meaning that it was in the vernacular of his readers—although not in the archaic, literal sacred-text translation style—rather than in Hebrew, the language more usual in rabbinical writings.) 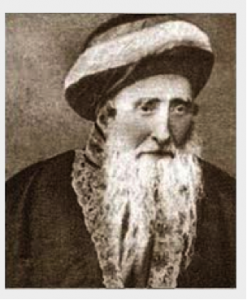 Similarly, Rabbi Avraham Palachi, a chief rabbi of Izmir (Turkey) in the 19thcentury, wrote in his moralistic work We-hokhiah Avraham (Salonika 1853: 7a) that “el ladino ke avlamos por nuestra parte no es aunado kon otros lugares en kuantos biervos, ke son demudados” (the Ladino that we speak in our parts is not identical with other places in a few words, which are different). Here again, “Ladino” was used in the context of speech, in unstated opposition to Hebrew, the language in which Rabbi Palachi said he was more used to writing.

In 1861, Rabbi Eliezer ben Shem Tov Papo of Sarajevo warned that mentioning or saying the name of God in vain was prohibited not only in Hebrew, but also in other languages spoken by Ottoman Jews, such as those he called “ladino,” “lashón di lus guyim” (Serbian), and “trukesku” (Turkish): “Inmintar il nombri di il Shem Yidbarah no es asur davká in lashón akódish, salvu in todu modu di lashón es asur, tantu in ladinu, komu lu ki uzan a dizir ‘A la ira dil Dio,’ i ansí in lashón di lus guyim ‘Bogami,’ … i ansí si dizi in trukesku ‘Valá bilá’” (Mentioning the name of the Name [=God] Blessed Be He is not prohibited only in the holy tongue, but in every type of language it is forbidden, both in Ladino, as they are used to saying [in the everyday spoken language] “A la ira dil Dio” [To God’s anger], and thus in the language of the Gentiles [=Serbian], “Bogami” [By God], … and the same if one says in Turkish “Valá bilá” [By God]) (Sefer Dameseq Eliezer, Orah Hayyim, Belgrade 1861: ff. 8a-8b).

In the twentieth century, Isaac Arditi, in the popular newspaper El Meseret of Izmir (vol. 23, September 9 1919, p. 40), sarcastically wrote about a grumpy rabbinical scholar in his community who “shabat entero … no aze ke meldar en lashón i en ladino pelear” (the whole day of Shabbat … does nothing but study in Hebrew and fight around in Ladino).

From such examples we can see that, over the centuries, “Ladino” has been used to denote the language of the Sephardim both in its written forms—including, but not limited to, that used in the literal translation of sacred texts—and in its spoken forms, especially when an opposition to Hebrew is stated or implied. Thus, especially in the context of Israel—where Hebrew is the everyday spoken and written language to which the special language of the Sephardim is juxtaposed, and where El Dia Internasional del Ladino was first conceived and received its name—the reference to the language of the Sephardim, in all of its spoken and written varieties, as “Ladino” is not a mistake but a preservation of a centuries-old Sephardic tradition.

The use of “Ladino” in this sense does not detract one iota from the seminal contributions of Professor Sephiha to the study of the unique, archaic calque variety of the language used by the Sephardim to translate sacred Hebrew and Aramaic texts. At the same time, its use in expressions such as “Ladino culture” brings today’s Sephardic terminology in sync with the current trend to denote the culture of a speech group by the name used to denote the language itself (e.g., “Yiddish culture”). In everyday speech and writing, and in websites dedicated to this culture, such as Ladinokomunita—which has itself decided to adopt “Ladino” as the preferred name for the language—native speakers have begun to incorporate “Ladino” into neologisms referring to themselves, such as “Ladino-avlantes” (Ladino speakers), and, here in Seattle, “los Ladineros.” This name, coined by Seattle community member Jack Altabef, refers to an intergenerational group of Ladino speakers who gather every week to read Ladino texts and discuss Ladino culture.