Debunking the myth of “elite Jews” in medieval Europe 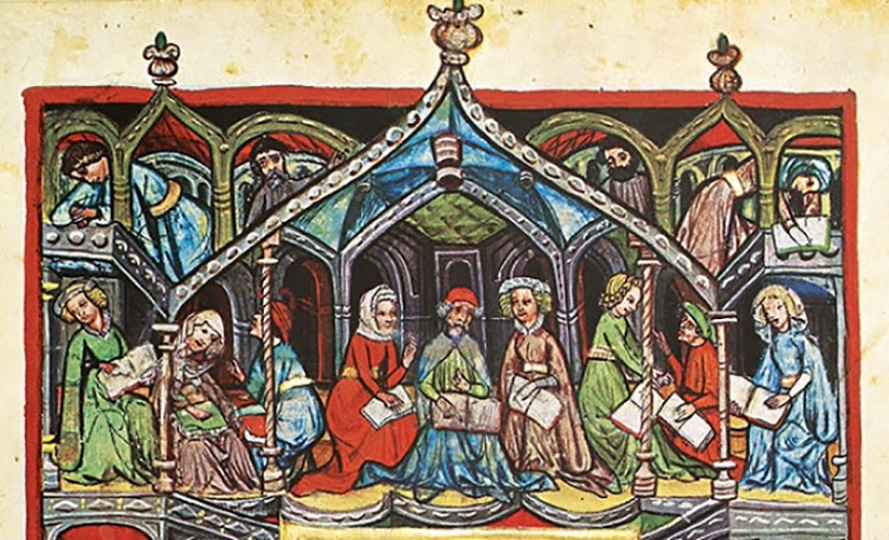 Centuries of anti-Semitism have perpetuated stereotypes about Jewish people and financial success. These stereotypes are so strong that they often get projected farther and farther back into the past, as if they were timeless descriptions of Jews.

Based on present-day stereotypes, Jews are sometimes believed to have been elite financial professionals and merchants throughout history. But Jews in medieval times were not categorically the exceptional financiers and traders these myths suggest.

In the late medieval period (1250CE-1500CE), commerce and finance were blossoming in Europe. Goods were exchanged between one end of the continent and the other. Ships zipped across the Mediterranean, along the Atlantic coast, through the North and Baltic Seas, and up and down rivers like the Rhone and the Rhine.

Some cities and communities began specializing in long-distance trade. Records from the Cairo Genizah storehouse of medieval documents testify to the extensive trade network of Maghribi (North African) Jews. But Jews were not unique in running commercial enterprises, nor did Jewish traders dominate the Mediterranean. Among the most well-known and powerful merchants of the era were the Christian traders of Ragusa (today Dubrovnik, Croatia), Venice, Genoa, Valencia, Catalonia, and the Knights of Malta. Italian traders and the Hanseatic League were most dominant in the Baltic and North Sea. 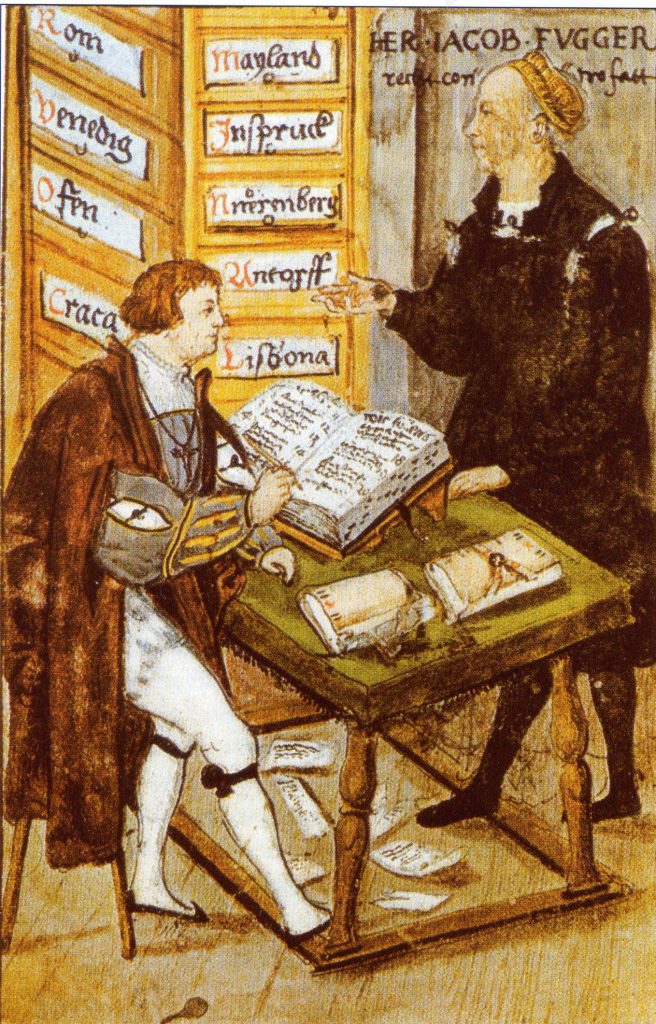 The most successful merchant communities developed reputations and identities as foreign commercial experts. “Foreignness” was a commercial advantage for traders because it communicated to customers that they had a wide reach and some credibility as merchants in other cities. Being foreign implied that traders traveled long distances and, importantly, were prepared to deal in multiple currencies.

Like in Europe before today’s European Union agreed to use the Euro to simplify trade and exchange, different regions and towns in Europe used different currencies in the medieval era.

Because long-distance traders traveled between places with different currencies, and because it was difficult to move and exchange coins between these places, these long-distance traders were central figures in developing European money markets for currency exchanges and guaranteeing that money deposited with them in one city could be transferred to another merchant in another city to pay for goods, land, or services there. In fact, foreign exchange through merchant family companies like the Italian Medici family and the German Fugger family built the first European banks.

The role of Jews in commerce and finance

There were no extensive continental Jewish trading networks that rivaled the Christian ones of medieval Europe. This is not to say that no Jews were involved in financial or trading professions. Historical records name many Jews dispersed across Europe whose livelihoods involved money and trade. It is well-documented elsewhere that Jewish cultural values of reading and learning prepared them well for medieval urban life and occupations, including commerce, at a time when literacy and schooling were not universal. But Jewish merchants were mostly active locally and regionally, as familiar members of their communities.

Some Jews were involved in small transactions with common folk. Everyday people in towns across sought loans or pawned possessions in order to afford necessities, like replacing tools in their workshops. For instance, in the region of Lucca, Italy, Jewish lenders played the role of middlemen between the urban world, where money and goods moved freely, and the rural world, which lived at the edge of subsistence with very little access to credit. 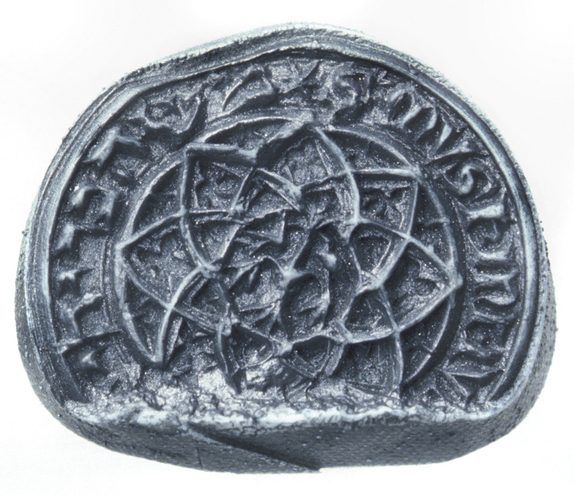 Some Jews were involved in large transactions for the rich and powerful. The Archbishop of Trier Balduin of Luxemburg (in office from 1307-1354) relied heavily on two Jews, Muskinus and Jakob Daniel, to provide credit and manage the transactions of the Archbishop’s court.

If some medieval European rulers employed Jewish financiers, it was because they, like their Christian counterparts, were financially successful as individuals. The majority of rulers relied on Christian financiers, like the Fuggers of Augsburg, Gerhard Unmaze in Cologne, the Le Gronnais family in Metz, and various other nobles and gentlemen.

While Christians treated Jews as a community of different origins and values, it was not the sense that Jews were from or belonged to some other land that made borrowing from Jews attractive. For the most part, Jews were not strangers in their towns; their families may have lived there or nearby for several generations.

If medieval Jews had one advantage in participating in the financial business of elites, it was the perception of their neutrality: They were not engaged in the Christian political conflicts that pushed elites to borrow money. Unlike Christian financiers whose business catered to the powerful, Jews could not use finance and credit to create influence and patronage among Christian elites.

For example, in 1359, the elites of the town of Andernach needed to raise funds to pay debts to the powerful Archbishop of Cologne, with whom they had been in conflict for the past few years. Rather than borrowing from Italian financiers, who were already involved with financing the Archbishop and the Catholic Church, the Andernach elites borrowed from the Jewish Bonefant family of Koblenz, a city about 20km away that was home to the second largest Jewish community in German lands.

The reality of medieval European Jews — that, just like Christians, a handful were successful merchants and financiers, but that the majority led economically mundane lives — disrupt these assumptions about the financial history of Jews, helping to dispel these damaging myths. 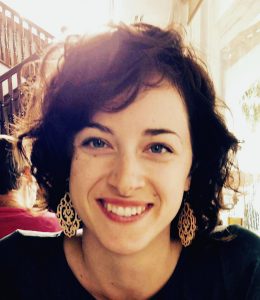 Kerice Doten-Snitker, Rabbi Arthur A. Jacobovitz Fellow, is a doctoral candidate in sociology at the University of Washington. She double-majored in sociocultural studies and international relations at Bethel University (Minnesota) before completing an M.A. in sociology at the University of Washington. Her scholarly interests include processes of inclusion and exclusion in society. Her current work examines the roles of political institutions, economics, and religion in the exclusion of Jews in medieval times, focusing on the Rhineland (western Germany). In fall 2017 she was a visiting student at the Arye Maimon Institute for Jewish History at Universität Trier in Trier, Germany, funded by the Deutscher Akademischer Austauschdienst (DAAD). In addition, she works at the University’s Center for Evaluation and Research for STEM Equity, which focuses on increasing equity — and the participation of systematically excluded students and professionals — in the fields of science, technology, engineering and math.