How a shared history of persecution brought two communities (back) together: Kurdish-Jewish cooperation in Germany 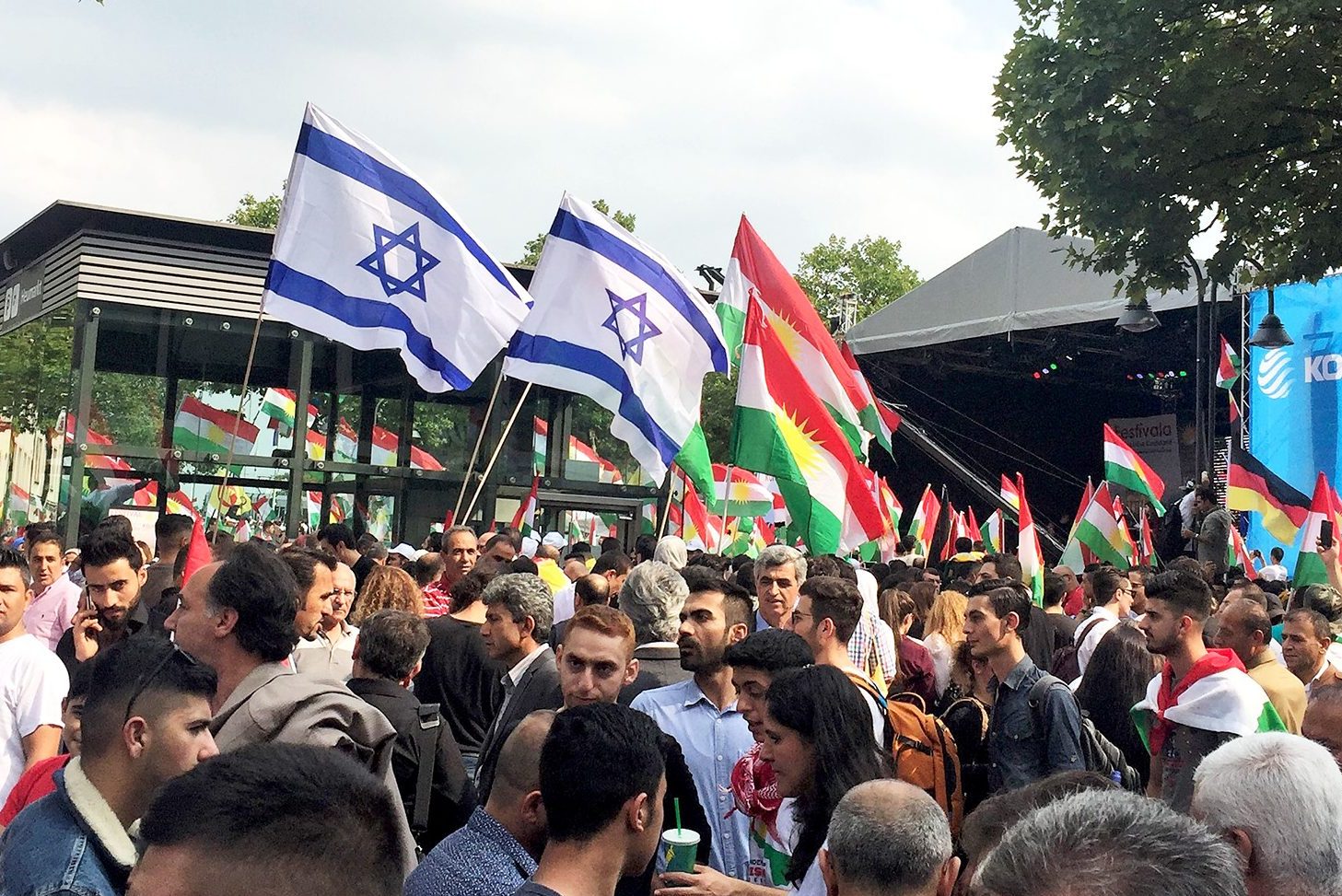 In the summer of 2017, I was doing preliminary research for my dissertation and found myself at yet another Kurdish rally in Germany. There were many rallies all over the country at the time, ahead of the Kurdish independence referendum in Iraq. Attending a rally like this wasn’t a new experience for me, as I’ve been to various cultural and political events organized by Kurdish associations in the past. The rallies during the summer of 2017 were different, though. There weren’t just Kurdish flags flying around, but plenty of Israeli flags as well.

Who are the Kurds?

The Kurds are the largest ethnic group in the world that does not have its own nation-state. Around 25 million Kurds live in the borderland areas of Turkey, Syria, Iraq and Iran. Though they have been trying to build their own nation-state for many years, they have not as yet been able to do so. The desire for a nation-state, or at least a certain degree of sovereignty, has remained, however, which has led to various violent conflicts between Kurdish groups and the states that they live in.

During these times of conflict, many Kurds have immigrated abroad, mostly to Europe. Germany hosts the majority of the Kurdish diaspora community and it is estimated that there are around two million people of Kurdish descent living there today. Most Kurds are Sunni Muslims, but there are also many other religious groups within the Kurdish community, including Yazidis, Alevis, and Jews.

A long history of mutual support

Leading up to the independence referendum, more and more Jewish and Israeli organizations and major publications in Germany and the Middle East came out with statements in support of the Kurdish independence referendum in Iraq. Even Prime Minister Netanyahu released a statement in which he emphasized that Israel “supports the legitimate efforts of the Kurdish people to attain a state of its own” and added that the Jewish people have a “longstanding, deep and natural sympathy” for the Kurdish people and their cause.

As I began to dig deeper into the topic, I noticed that cooperation between Kurdish and Jewish organizations in Germany had increased significantly in the past few years, with a surge of public events and lecture series intended to increase mutual understanding and support. I became increasingly interested in what explained this (re-)emergence of Kurdish-Jewish cooperation in Germany. As my summer research came to an end, it was clear that this topic would become a substantial part of my dissertation research on the Kurdish community in Germany. 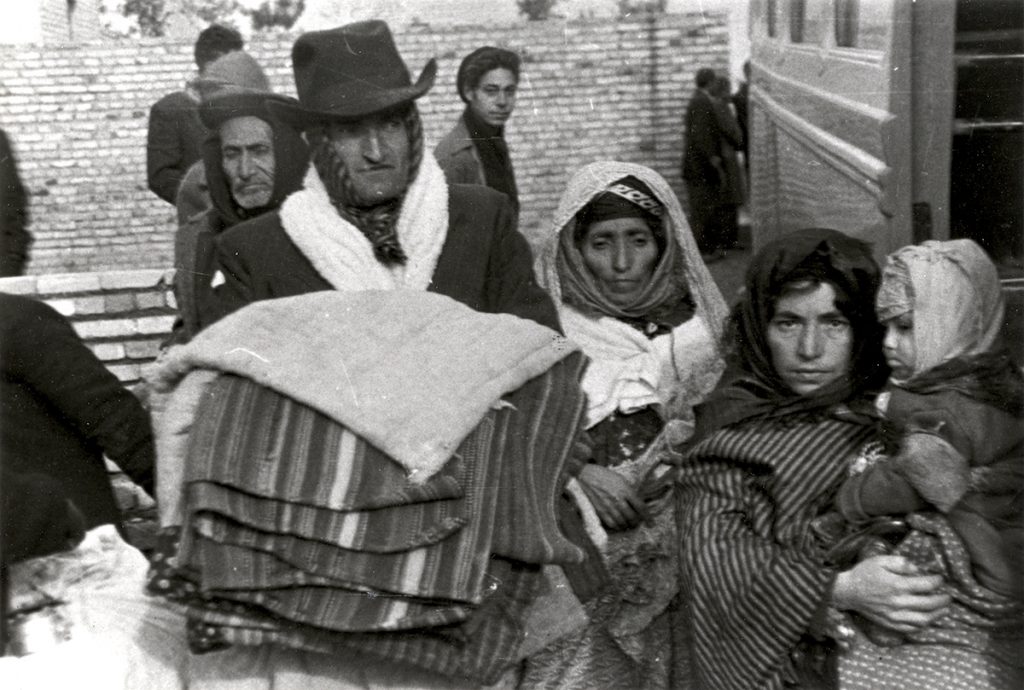 A Kurdish-Jewish refugee family preparing to board buses to Israel (circa 1950-51). From the Magnes Collection of Jewish Art and Life, UC Berkeley.

When the Iraqi state was established in 1932, life became increasingly hard for Jews who lived there. Several members of the Jewish community died in the 1941 Nazi-inspired pogrom in Baghdad, and many Jews were eventually forced to leave for Israel in pursuit of a better life. Muslim Kurds helped them by smuggling them out of the country well into the 1970s. Many of the persecuted Jews of Iraq were themselves Kurdish.

Today, there are about 200,000 Kurdish Jews living in Israel. Although the reciprocated support of Kurdish and Jewish organizations in Germany is a newer development, Kurdish Studies scholar Dr. Ofra Bengio from the Moshe Dayan Center in Tel Aviv explains that the relationship between Jews and Kurds has deep historical roots. Muslim Kurdish tribal leaders repeatedly supported and protected members of the Jewish community in Iraq from other Muslim leaders,  going back to the 16th century.

Tragedy leads to a re-emergence of ties in the diaspora

More recent years have seen a re-emergence of this historic relationship in the European and North American diasporas of the two communities. As I continued my research this summer and talked to representatives of Jewish and Kurdish organizations in Germany, both sides emphasized their shared experience of persecution as a leading cause of their increased support for each other. Most recently, the events of August 2014 in Sinjar in Iraq led to a repeated outpouring of solidarity and support in the diaspora and Middle East alike when thousands of Yazidis were were faced with genocide by ISIS.

“The events in Sinjar seemed too familiar,” a representative of a Jewish organization stated, referring to the events of August, 2014, when thousands of Yazidi men were massacred, and women taken into sexual slavery. “Our memory of genocide and our shared goal to educate people about past and present atrocities is what repeatedly brings us together with the Kurdish and Yazidi community.”

The importance of showing solidarity

The Yazidis are a mostly Kurdish-speaking religious minority in the Middle East. (It is important to note that some Yazidis consider themselves both an ethnic and religious group that is distinct from the Kurdish community.) 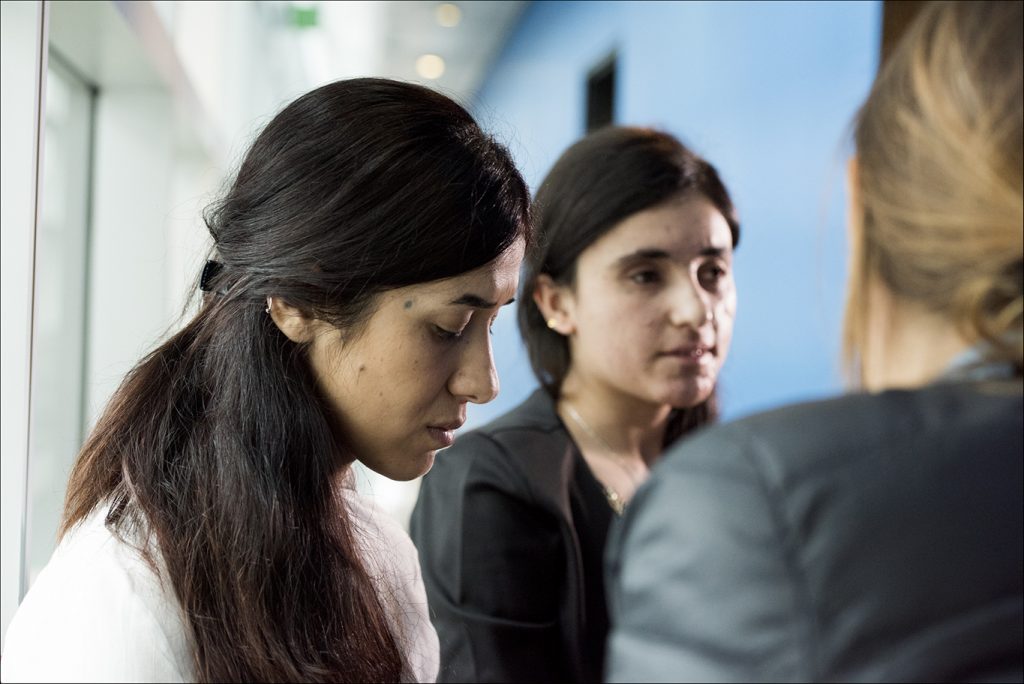 When ISIS attacked the Yazidis in 2014, they were forced to escape to the Sinjar Mountains. Whole families were killed and there was barely any support or media attention.

An old Kurdish proverb states that the Kurds have no friends but the mountains. Many Kurds in Germany felt a great deal of pain at that time and were again reminded of that saying.

As the crisis continued, Jewish organizations in Germany came out with public statements and organized events that aimed to raise awareness of the atrocities, expressing solidarity with the Kurdish and Yazidi communities. A representative of a Kurdish organization in Germany reflects: “We felt so helpless at the time. Experiencing such support and solidarity meant a lot to us.” A representative of another organization remarked, “Our history of persecution and suffering is not only at the basis of our understanding of each other but our solidarity with each other.”

Ever since then, Kurdish-Jewish cooperation in Germany has been flourishing and many Kurdish representatives expressed their gratitude to Jewish organizations for their mentorship and support in the past few years. One of them stated, “We actually do have some friends.”

I would like to thank the Stroum Center for enabling me to expand on my study of the re-emergence of Jewish-Kurdish cooperation in the German diaspora. The Opportunity Grant I received allowed me to learn about how two communities that have both experienced horrific atrocities have reconnected with each other in the diaspora. Despite the atrocities they have faced, they continue to work towards intercultural and interreligious understanding with an unparalleled optimism. Their stories of solidarity are an important reminder of what is possible during these tumultuous political times in the U.S. and Europe.

Pinar Kara is a Ph.D. candidate at the Henry M. Jackson School of International Studies focusing on immigrant and civil society studies in Germany. She is currently conducting dissertation research in Berlin as a fellow of the Free University’s Berlin Program for Advanced German and European Studies.