Learning about counterterrorism in Israel 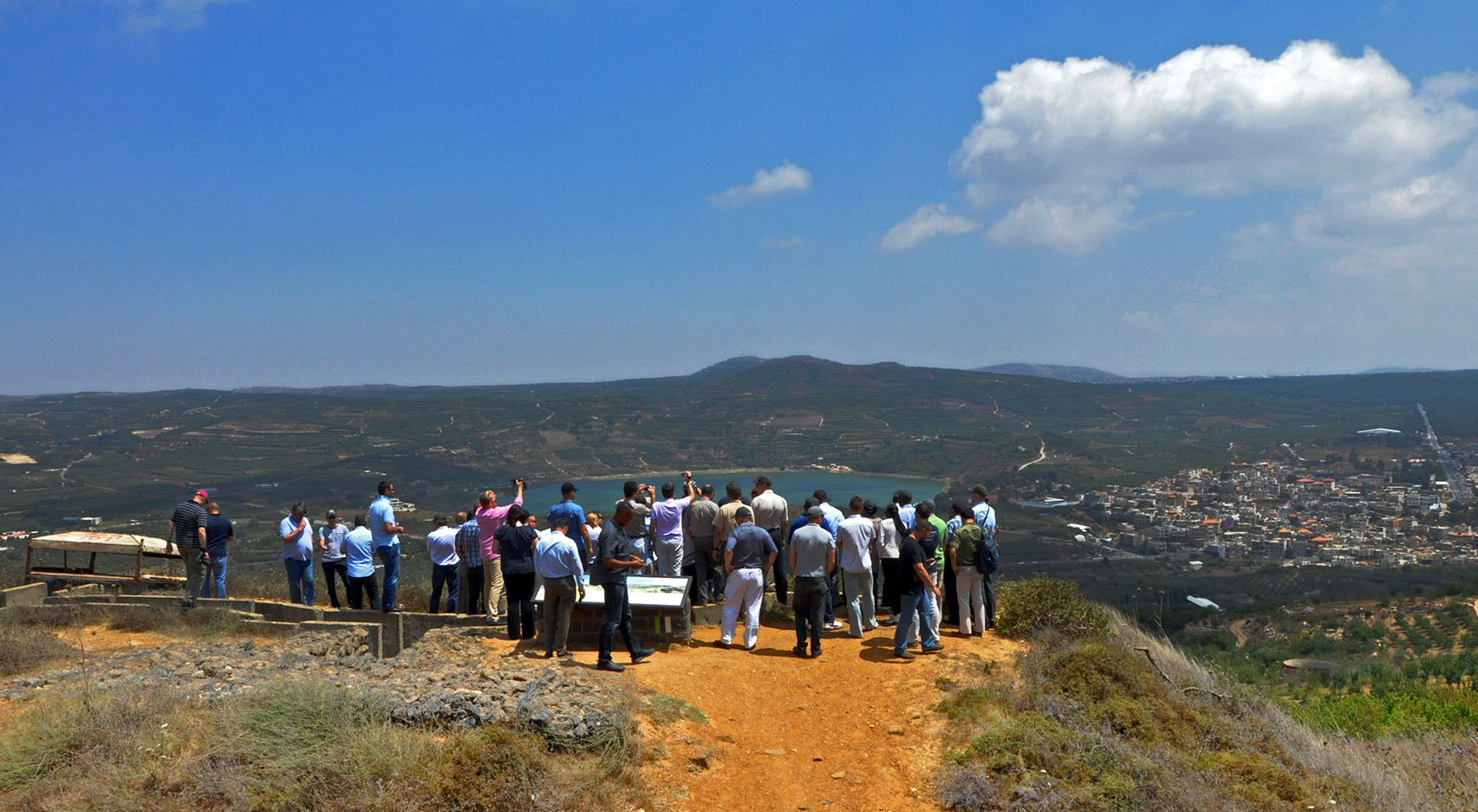 A field trip to the Golan Heights region, part of a counterterrorism program facilitated by the Institute for Counter-Terrorism at the Interdisciplinary Center, Herzliya. Photo by Randy Karpinen.

Fifteen seconds. Fifteen seconds to gather your family and pile into your saferoom. Sirens wail and children playing at a playground must rush for cover in their dragon- or Smurf house-shaped bunkers. The rocket flies overhead. Then a flash, shockwave and smoke. Maybe it landed in a field, maybe a school, or maybe it was fired from far enough away that it was intercepted by the Iron Dome missile defense system.

This is the near-daily experience of the Israeli civilians living in Israel’s southwest region near Gaza, courtesy of Hamas. In the north, Hezbollah takes the fight to Israel’s underground using tunnels, striking past military defenses and targeting Israel’s civilian population. During the second intifada (“uprising”), between 2000-2005, over 700 Israeli civilians were targeted and killed by terrorist attacks. While violence slowed for a while, Israel is currently experiencing an uptick in terrorist activity, coinciding with a global rise in anti-Semitism. 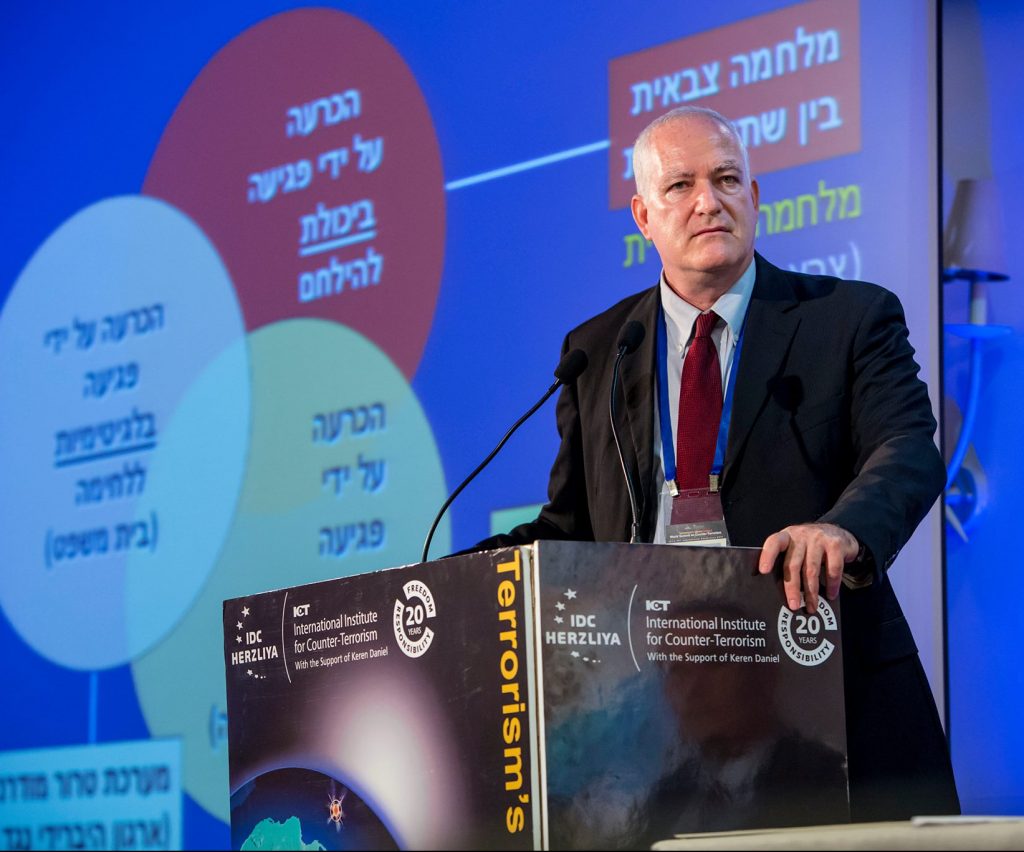 Dr. Boaz Ganor at a counter-terrorism conference in Israel. Photo via Boaz Ganor.

Terrorism, as defined by Dr. Boaz Ganor, founder and executive chair of the International Institute for Counter-Terrorism (ICT), is “a form of violent struggle in which violence is deliberately used against civilians in order to achieve political goals (nationalistic, socioeconomic, ideological, religious, etc).” Israel is no stranger to terrorism, and some of the world’s top thinkers, strategists and practitioners come from and to Israel in order to advance the still-emerging field of counterterrorism.

I was lucky enough to be accepted on a hybrid Taglit (Birthright)/ICT study abroad program focusing on counterterrorism and security in the Middle East. The ICT is an independent think-tank based out of a private Israeli university, The Interdisciplinary Center (IDC) Herzliya, providing expertise in a variety of counterterrorism topics, as well as providing a joint forum for policy makers and counterterrorism practitioners and scholars. This program included classroom hours on the theory and practice of counterterrorism, visits to sensitive and strategic areas, and countless life-changing moments.

As an American Jew and soon-to-be US Army officer (via the University of Washington’s ROTC), this experience was invaluable. I was able to connect to my roots and learn hands-on about the shared values and threats that both the US and Israel have in common. From Tel Aviv, Israel’s bustling economic hub, to the rich tapestry of history woven by the narrow alleyways of Jerusalem, Israel’s capital, one can see people from all walks of life and all regions of the world. Judaism is very much oriented around the value and beauty of the gift of life, and my impression is that Israel is no different. In the fields of counterterrorism and security, Israel takes a number of precautions to preserve innocent lives. 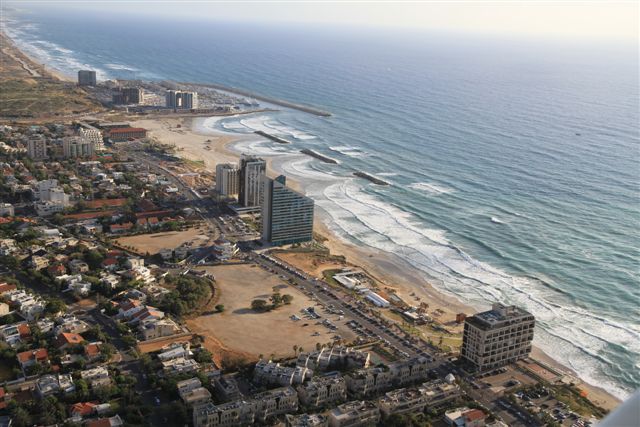 The Israeli city of Herzliya, where the ICT is located. Via IDC Herzliya.

As I learned about the Israeli military’s processes for striking terror targets, from a current reserve IDF Officer who was familiar with the process and associated with the ICT as a civilian academic, I was impressed with the amount of care given to the principles of the Law of Armed Conflict (LOAC), the international legal standard for conduct in warfare, of:

Through a very thorough targeting process, Israel puts itself at a disadvantage tactically, which terror organizations understand and exploit as best they can. This is a major trade-off in fighting threats from terrorist organizations or insurgencies: when actions adhere to liberal-democratic values, effectiveness as a tactical fighting force decreases.

This is why organizations like Hamas, Hezbollah, Daesh (the Islamic State) and others utilize human shields and use schools and hospitals as their bases. While these organizations have justifications as to why they resort to these tactics (citing the unequal nature of the battle, fewer technological and tactical advantages, etc.), these practices put Israel and other democratic nations in a difficult position. It forces security practitioners into a very uncomfortable and dangerous place, having to choose between potentially stopping the next major terror attack and having civilians lose their lives in the crossfire.

While every step is taken to prevent loss of innocent life, terrorist organizations work very hard to make it as messy as possible. For example, the Israeli military often uses the strategy of “knocking” on the roof of a building used by Hamas with an extremely low-power projectile to let civilians know they should leave, also generally accompanied by other warning signs as well, such as dropping leaflets and even calling residences or businesses prior to a strike. In a situation like this, Hamas has trained civilians to rush to the roof so that if struck, they will surely die and become propaganda for their cause. This is not the strategy of a legitimate ruling power, but that of a terror organization.

During my time in the holy land, between courses learning about these multifaceted security issues, I made many wonderful friends and contacts working in the security industry and academia. This summer I am going to return to Israel and continue where I left off, this time as an intern with the ICT.

Working in the world of security, either domestic or international, is not a pretty path. War and violence are ugly and full of impossible decisions. One must be grounded with morals that can serve as a compass in navigating life-and-death decisions. While Israel receives a huge amount of criticism, they take many precautions to prevent needless loss of life.

The Talmud says that whoever destroys a single innocent life has destroyed the whole world, and whoever saves a single life has saved the whole world. Israeli security practitioners, whether Jewish or not, heed the traditional Jewish belief that life is incredibly precious and must be protected. Even when it puts them at a tactical disadvantage, their liberal-democratic values and respect for life guide them through some of the toughest problems the world has to offer. 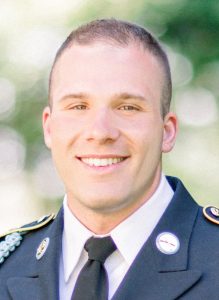 Graham Harper is an M.A. student at the Henry M. Jackson School of International School focusing on peace, violence and security in the Middle East, international law, and counterinsurgency and counterterrorism. With the support of a Stroum Center Opportunity Grant, Graham will participate in a study abroad program focused on conflict resolution and counterterrorism in partnership with the International Institute for Counterterrorism in Israel. By participating in the program, he hopes that he will gain valuable first-hand insight into the region as well as cultivate professional ties he can utilize for further research and to develop mutually beneficial Israeli-American working relationships in the field of counterterrorism.