Musical Message of Peace without Politics 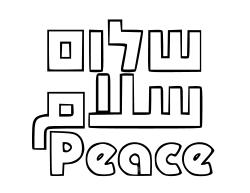 Imagine a fusion of African, Arab, Caribbean, Latin, and hip-hop music, combined to create a unique Israeli flavor. That’s what Shotey HaNevua, an Israeli band whose name translates to mean, “The Fools of Prophecy,” has created in their music. Their first CD, released in 2000, was very lighthearted, upbeat, and much less cynical than other left-wing Israeli groups, such as HaDag Nachash. They quickly became popular for their multi-cultural and joyous melodies, but their second album was much more calm and serious. In 2005 they were selected as Israel’s Band of the Year, and they also toured the United States that same year. The band broke up in 2007, and the singer, Avraham Tal, went on to pursue his own solo career. The rest of the band continued to play under the name Pshutei Ha’am.

The song, “BaMalon BeRabat Amon,” which translates to mean, “In the Hotel in Amman,” was released on their first album. The song tells about a hotel in Amman, where people from all over the world interact and get along. In the chorus, various cities are named, including Tel Aviv, Hebron, and B’nai Brak, followed by the sentences, “Let peace arrive… you guys are cool people.” The song manages to be peaceful without necessarily being political, and sings about how all people, from all places, are just trying to live their daily lives.

I appreciate that this song promotes peace without endorsing any particular political position. The specific cities mentioned in the chorus express an unusually high level of tolerance and acceptance for all people, as I think it’s easier for many secular Israeli Jews to identify with the Arabs in Hebron than to identify with the religious Jews in B’nai Brak (or with the Jews living in Hebron, for that matter). To acknowledge that all people from all over the map have the right to live their daily lives is a seemingly simple sentiment (yet certainly easier said than done) that we all must recognize in order to achieve peace.

At the end of the song, Shotey HaNevua sings, “Let understanding flourish and bloom… One person is a big manager, two other people are merchants in the shuk

[market], somebody else loves to laugh and tries to feel, he searches for meaning, searches for love. Sometimes he’s confused and can’t distinguish between good and bad… Yes, even at the end of the road, you won’t know if it’s all really true, or just a dream that passes… Ask God to protect that which there is: the hope in the heart, the strength that’s found here… Life is a journey in time.”

These lyrics transcend politics and promote a peace that stems from individuals’ acceptance of one another. The cheerful melody and whimsical lyrics of “BaMalon BeRabat Amon” seem to suggest that peace is far more simple and easy than we imagine it to be. To me, this song is saying, “Forget about the governments, forget about the treaties – peace will come when every one of us rejoices in the fact that all people, from all places, have the right to live their daily lives.”

In contrast to the lighthearted and postmodern lyrics of “BaMalon BeRabat Amon,” “Kol Galgal,” which debuted on Shotey HaNevua’s second album, “Looking for Dorot,” has a slow melody and deeply religious lyrics. The lyrics of “Kol Galgal” come directly from the Zohar, and tell of a spiritual world in motion. Although the beautiful lyrics are hard to translate justly, Kol Galgal sings of the sound of a revolving wheel, the voice of the shofar, and the sound of moving wagons.

Boaz Mauda went on in 2008 to represent Israel in the international song competition Eurovision, where he took ninth place. Check out his performance here:

Gabriella Horowitz discovered the band Shotey HaNevua while she was studying in Israel and trying to immerse herself in Israeli music in order to advance her Hebrew skills. She quickly fell in love with the band’s charming lyrics and unique melodies, and she is excited to share their music with others.

Want to see more articles like this?  Sign up for our newsletter!
⇒ Learn more about the Stroum Center for Jewish Studies at the University of Washington, our Sephardic Studies Program, or our Israel Studies Program.
Note: The opinions expressed by faculty and students in our publications reflect the views of the individual writer only and not those of the Stroum Center for Jewish Studies.
By Naomi Sokoloff|2017-09-04T22:42:56-07:00June 13th, 2012|Categories: Hebrew Student Writing, Israel & Hebrew Studies|Tags: Culture, Israel, Music, Sokoloff, Winter 2012|0 Comments