Digging for the Past, Looking to the Future 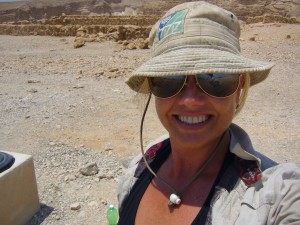 Classics Prof. Sarah Stroup on location at the Tel Dor dig in Israel.

How can professors forge intellectual partnerships with their students when their interactions on campus typically revolve around tests, papers, and grades? For Sarah Stroup, Associate Professor of Classics, the answer is simple: dirt is the great equalizer.

A founder and long-time instructor at the UW Tel Dor Field School, an archaeological site in northern Israel, Stroup speaks passionately about the way that hands-on work can change the way students see themselves in relation to their teachers and to scholarship in general. “Most people experience archaeology passively; it is something they might read about in a journal. This experience allows individual students to participate in it actively. They become research partners and their work is contributing to history. It helps the students radically rethink themselves as researchers and intellects, and they also see the professors as real people who not only teach them to excavate, but also excavate alongside them.”

Situated on a natural harbor just south of Haifa, the port town of Dor provides crucial insight into ancient life on the Carmel coast. The site dates from the Bronze Age, around 1100 BCE, and extends into the 2nd or 3rd century CE. Dor is particularly noteworthy for the record it provides of cultural cross-currents brought by the different occupying powers (such as the Persians, Greeks, and Romans) over the centuries. The physical evidence that the archaeological team uncovers, like the city structure and imported luxury goods, can teach us about what aspects of foreign cultures the native Dorian population adopted, and which they resisted.

Maintaining identity in an era of multi-culturalism… sound familiar? In fact, Professor Stroup sees the ancient world as an intriguing way to reflect upon issues central to the modern Jewish experience. Already in antiquity, she suggests, we can see how a group maintains its identity while confronted with new influences and the temptation to assimilate into a politically dominant culture. To that end, Stroup has developed a course, “Jews, Greeks, and Romans in the Ancient World,” which encourages students to think about antiquity and Jewish identity in new ways.

UW Professor Sarah Stroup finds her perfect classroom - one without walls - and her students find a passion for archaeology. 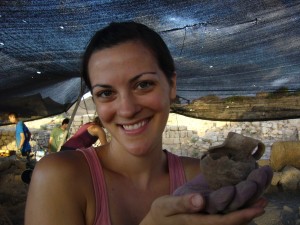 Stroup lights up when she talks about the Field School at Tel Dor. Although most of her research in Classics has to do with textual study, she finds the Dor research intellectually and pedagogically invigorating. Very few field schools offer this level of technical instruction—from the digging, identification, and conservation of objects, to the new digital tools available to contemporary archaeologists. Not only do students get twelve academic credits, they also become empowered to make significant historical discoveries while living and working abroad. In fact, it was a student who discovered a rare Carnelian stone, dating from the third century BCE, on which the profile of Alexander the Great was engraved.

Stroup estimates that about 25% of Field School alums from the past few years have continued on to graduate study. Mallory Genauer attended the Field School in the summer of 2008 and graduated from the UW in 2010. For her, the Tel Dor work was life-changing: “The feeling of digging in the layers of ancient earth and finding walls, wells, and smashed amphora, or finding olive pits or seashells that were from another country, thus proving that trade had occurred, is indescribable. I knew then that I had found my passion; it just clicked.” Genauer’s experience motivated her to change her academic focus and pursue graduate study; she recently completed a Masters in Classical Art and Archaeology from the University of Edinburgh. 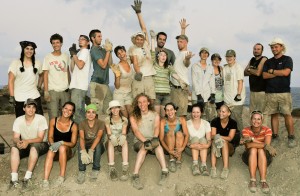 A group portrait of the participants on the 2011 Tel Dor dig.

Professor Stroup is planning to return to Dor in the summer of 2013 and hopes for a strong contingent of UW students. With less than 10% of the site excavated, there is plenty more to uncover; in particular, she has her eye on a Roman theater and the elegant private homes on the site’s northern end. Tel Dor has strong potential to be developed into a visitor site that will allow for both education and stewardship on a broader scale. For now, Stroup and her team are doing their part to contribute to the rich and complex history of the ancient world. While the artifacts they unearth are noteworthy, the best find of all may be each student’s discovery of the scholar inside them.

Want to see more articles like this?  Sign up for our newsletter!
⇒ Learn more about the Stroum Center for Jewish Studies at the University of Washington, our Sephardic Studies Program, or our Israel Studies Program.
Note: The opinions expressed by faculty and students in our publications reflect the views of the individual writer only and not those of the Stroum Center for Jewish Studies.
By Hannah Pressman|2017-09-04T22:42:46-07:00November 5th, 2012|Categories: Jewish History & Thought|Tags: Ancient World, Archaeology, History|1 Comment