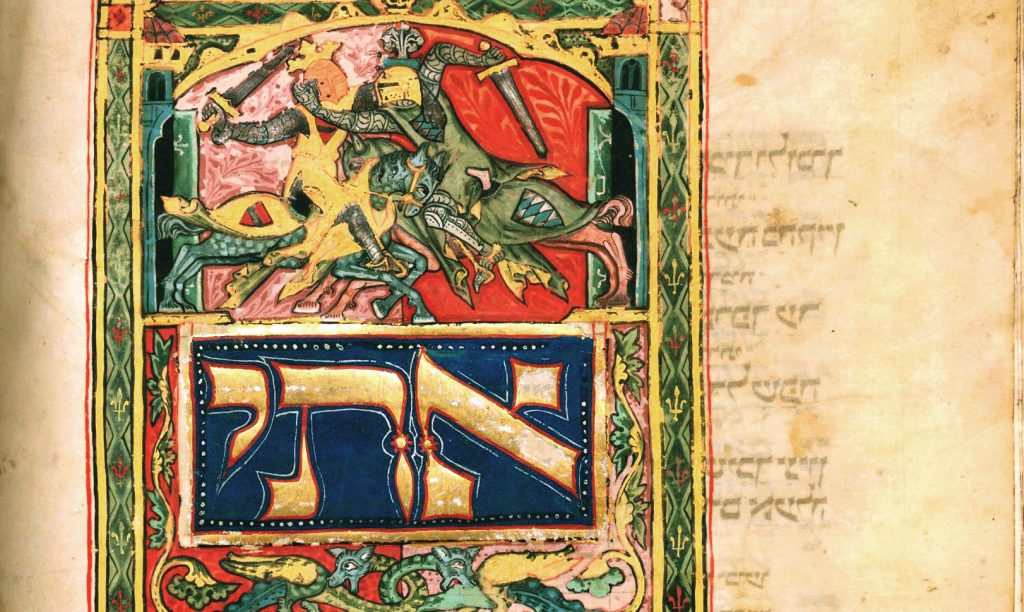 Illumination from a Hebrew prayerbook, ca. 1320. From the Dávid Kauffman Collection of medieval manuscripts, part of the Oriental Collection of the Library of the Hungarian Academy of Sciences. See the full image from the mazhor, MS Kaufmann A384, fol. 103v.

Have you heard of the Yiddish-language King Arthur stories written between the 14th – 18th centuries? These retellings of Arthurian tales for Jewish audiences were tremendously popular for centuries, though they aren’t well known today, as I discuss in my recent book on this subject.

Let me be clear: Medieval rabbis didn’t want their communities to read knights’ tales, especially not if they were Ashkenazi (European) Jews, no matter whether they were men or women. Medieval rabbis were concerned that Jews were spending way too much time on Sabbaths reading about knights and other non-religious figures when they should have been reading Yiddish translations of psalms or stories about biblical heroes. 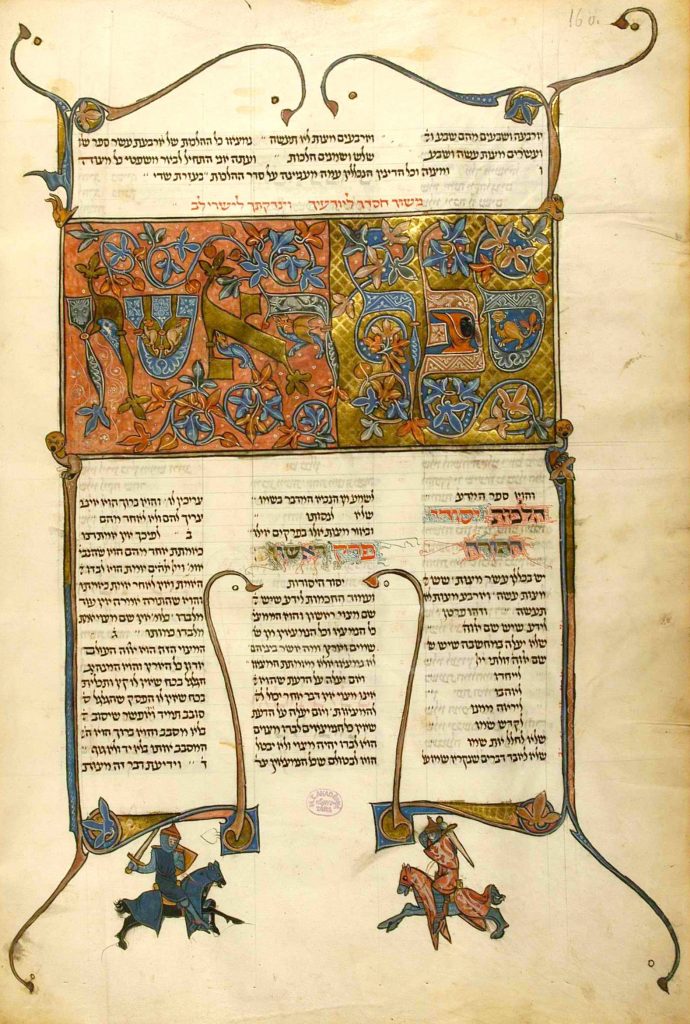 Illumination from a 1296 version of the Mishneh Torah shows knights clashing at the bottom. From the Dávid Kauffman Collection of medieval manuscripts, part of the Oriental Collection of the Library of the Hungarian Academy of Sciences. See the full image, Mishneh Torah, MS Kaufmann A77/I.

16th-century translator Michael Adam actually used the preface to his 1560 translation of the first five books of the Bible to warn his readers against heroic epics, as did scholar Elia Levita in his preface to his 1545 Yiddish translation of Psalms. In a funny twist, Elia Levita was actually himself the author of the most famous Old Yiddish knightly romance, the Bovo Bukh, first printed in 1541.

The fact that we have several of these admonitions, warning audiences against reading non-religious fantastic stories in Yiddish and Hebrew, indicates that their addressees were in fact quite enchanted with this style of literature. And indeed, we have many examples that prove this point: adaptations of heroic epics, stories about knights of the Round Table, and other non-religious fictional stories.

The fascination with this kind of material is also reflected in art – most prominently in a wealthy Jewish family’s house in Zurich, in present-day Switzerland. Knight images were so popular that they even served as illustrations in a 13th-century Hebrew rabbinical text, Mishneh Torah, and an early-14th-century Hebrew prayer book. These documents feature illustrations with knights riding on horses and engaging in one-on-one sword fights. Not satisfied with telling the stories in literary or visual form, a few Jews even strived to become knights or medieval fighting masters themselves.

Today, many of the late medieval and early modern fictional tales about knightly adventure written in Yiddish are nearly forgotten, or at least under-researched, for a variety of reasons. Many of the manuscripts were only discovered by chance in the 19th and 20th century — as was the case with the most famous one, the Codex Cambridge, which was found as one of the discarded documents in the Cairo Genizah, a synagogue repository for unwanted writings. 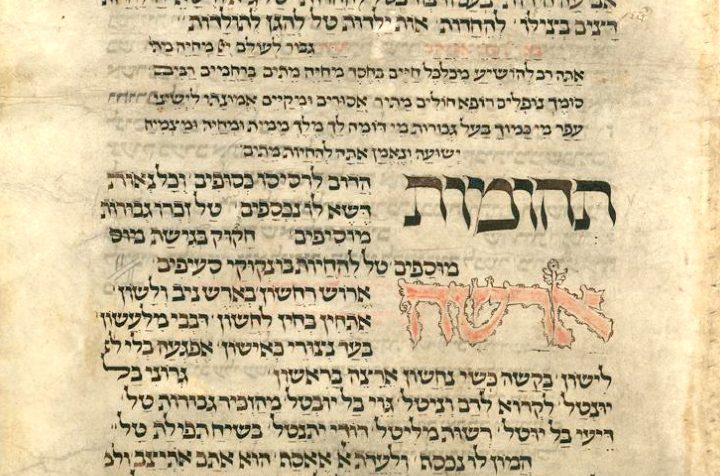 Page from the 1272 Worms Machzor, held by the Jewish National and University Library, Jerusalem. Learn more about Old Yiddish and this machzor at the Yivo Encyclopedia.

When these medieval and early modern texts were rediscovered, many Jewish scholars considered the non-religious, Old Yiddish texts to be lowbrow literature, both because of their content and their language — in the 19th century, Yiddish did not have a good standing among many German- and English-speaking Jewish scholars. Moreover, Old Yiddish is a quite unique Germanic language that – in contrast to modern Yiddish – is almost completely free of Slavic influences. As such, it requires mostly a familiarity with earlier stages of German, and the study of these tales necessitates further knowledge of pre-modern German fictional literature.

Only by accident did one such tale catch my attention in 2009. I was reading a study on German literature at the library of the Freie Universität Berlin, and a footnote had a reference to a Yiddish text about a knight of King Arthur’s Round Table. I managed to find the text, and what started as a seminar paper turned into a dissertation, which turned into two books.

The text that introduced me to the premodern Jewish fascination with tales about King Arthur and his knights was “Viduvilt.” This Yiddish text, whose author is unknown, exists in three 16th-century manuscripts (likely from Northern Italy), but was likely first written one or even two hundred years earlier. 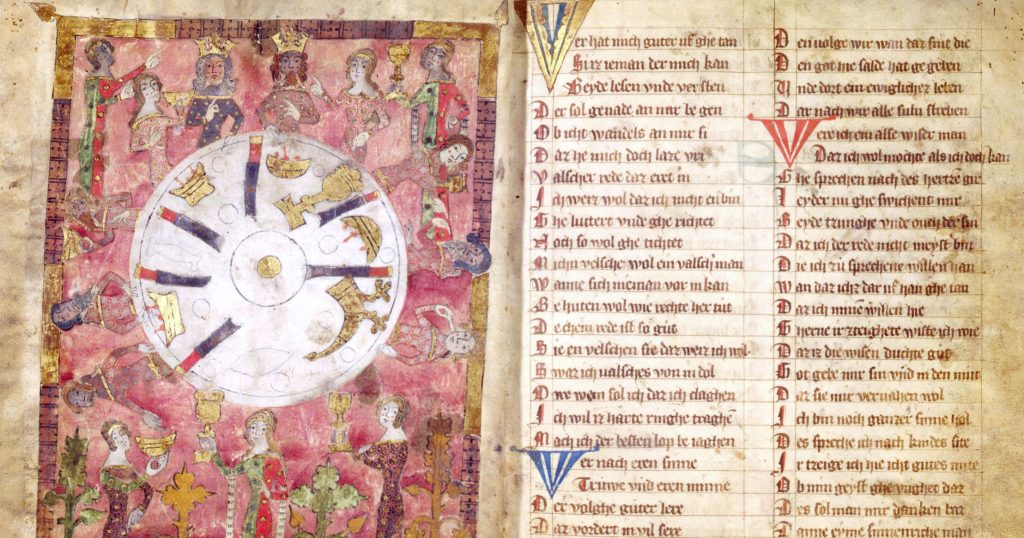 The Round Table, from a 1337 manuscript of “Wigalois.” Leiden University Library. Via Wikimedia Commons.

“Viduvilt” presents a rather free adaptation of a Middle High German Arthurian romance, “Wigalois,” written by Wirnt of Grafenberg circa 1215-1220. Viduvilt – or Wigalois as he is called in Middle High German – is the son of Gawein, who is perhaps the most famous Arthurian knight of the Round Table, known for his encounter with the magical Green Knight. In “Viduvilt,” the knight Viduvilt leaves the Arthurian court to free an enchanted kingdom from a powerful oppressor. Conveniently, he is matched with the country’s beautiful heiress after he completes the task.

The tale of Sir Viduvilt as adapted by Jewish authors, and beyond

Both in the Yiddish and in the German, the tale includes exciting, fantastic elements that probably attracted the (late) medieval audiences just as they attract us today: magic, giants, dragons. But the Yiddish version holds a few surprises, both in the story line and in its reception.

First, the Yiddish adapter takes the story and changes some plot elements and names here and there, taking out some characters and adding in others. But the strongest revision of the Middle High German sources can be found in the unique construction of women in the story. Rather than following the traditional role models established in the German versions – beautiful women waiting to be rescued and married, or dying of a broken heart over the loss of their husbands and/or sons — the women in the Yiddish adaption invite themselves to weddings, instigate wars and attempt to kill the hero. They are the ones guiding the hero, helping him to succeed, and in a few cases are even the ones wielding the power in the world of the story, as I explore in an earlier book. 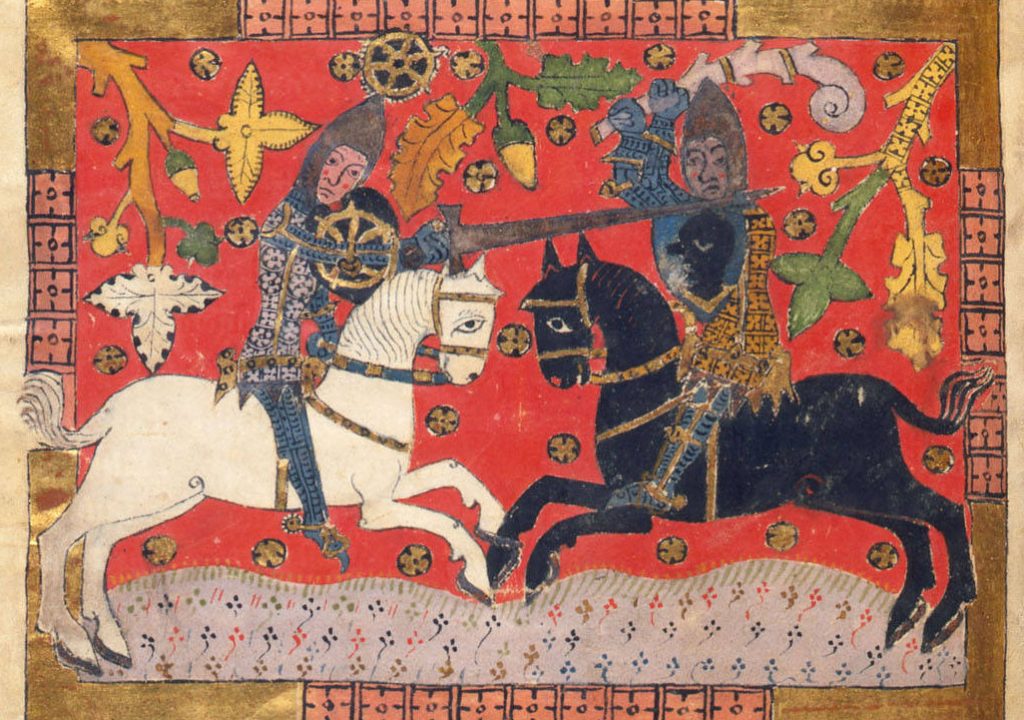 Illustration from 1337 manuscript of “Wigalois,” from the Leiden University Library. Via Wikimedia Commons. Used as an illustration in Cait Stevenson’s wonderful article on Jewish knights for Medievalists.net, “Why is this Knight Different than Other Knights?”

Secondly, this initial Yiddish adaptation was not the end of Yiddish Arthurian tales. As I mentioned earlier, three separate 16th– century manuscripts of “Viduvilt” have been discovered so far – which is already a lot for an Old Yiddish non-religious text! And adapters and audiences alike continued to be so fascinated by the story that this version resulted in new and different adaptions for the next several hundred years — perhaps the most fascinating and obscure one being “Sir Gabein,” from 1788-89, a tale in which the Arthurian knight Gabein does not return to Camelot but – via Russia and Sardinia – reaches China and ultimately ascends to the Chinese imperial throne as the new emperor. This tale of a Yiddish-speaking Arthurian knight turned Chinese emperor – an unlikely storyline if there ever was one – is dedicated to the Prussian king Frederick Wilhelm the Second.

But, even more fascinating, “Viduvilt” did not just inspire further Yiddish adaptations of the tale. Rather, the text made a later comeback in German in the form of an early, 17th-century Yiddish textbook for German-speakers. Subsequent German authors based their own adaptations of this story on the Yiddish “Viduvilt,” mediated by the textbook version rather than the actual medieval Middle High German version of the story.

Telling and retelling the stories of Knights of the Round Table

What inspired people to keep telling this story? What made this such a successful story across languages, centuries, and cultures?

I argue that people love a good knight’s tale and that these stories are very adaptive. Retelling the story to put women in power works for these stories, while adding extra interest for new generations, much like putting Dev Patel in the role of Sir Gawein in the recent movie “The Green Knight” adds a new layer to this fantastic tale.

In Arthurian tales, the Round Table is made to represent equality, diversity, and inclusivity, and perhaps it makes sense that members of minority groups, including Jews, would be drawn to make these tales their own.

**”The Knight Without Boundaries: Yiddish and German Arthurian ‘Wigalois’ Adaptations” is available now from Brill, as is “He Should Have Listened to His Wife: The Construction of Women’s Roles in German and Yiddish Pre-modern Wigalois Adaptations.”** 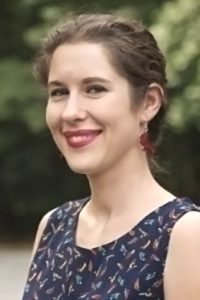 Annegret Oehme is an Assistant Professor in the Department of German Studies at the University of Washington. She has published articles on pre-modern German and Yiddish literature in The German Quarterly, Ashkenaz, Daphnis, and Arthuriana, as well as the books “The Knight Without Boundaries: Yiddish and German Arthurian ‘Wigalois’ Adaptations,” published by Brill in 2021, and “He Should Have Listened to His Wife: The Construction of Women’s Roles in German and Yiddish Pre-modern Wigalois Adaptations,” published by De Gruyter in 2020.