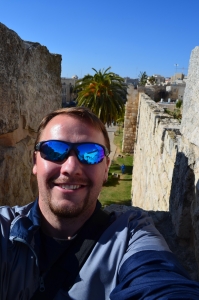 Jesse Lamp has been awarded a FLAS fellowship to pursue his study of the Hebrew language. He is a second-year masters student in the Middle East Studies Program of the Henry M. Jackson School of International Studies. Jesse’s regional focus is on Israel/Palestine. He hopes to pursue doctoral research on community markets (Shouks) in Israel so as to map food and worker migration, analyze social construction and interaction, and understand overarching power dynamics affecting the Israel/Palestine conflict.

Jesse first learned Hebrew as an undergraduate at Saint Martin’s University. His advisor taught a one-year Biblical Hebrew course which Jesse extended into a second year, as he wrote a senior thesis on the etymology and contextual use of toledot (genealogies/histories) in the Hebrew Bible. After finishing his undergraduate degree, he decided to transfer his Biblical Hebrew knowledge into a contemporary language, and applied for the winter Hebrew Ulpan at Tel Aviv University. He completed that course and then took the second year of Modern Hebrew offered by NELC when starting graduate studies at the University of Washington. In Autumn Quarter 2015 he enrolled in “Hebrew Poetry” (MODHEB 404), taught by Prof. Naomi Sokoloff, which examines twentieth-century poetry that comments on, elaborates on, or re-imagines biblical texts.

Jesse has made remarkable progress in his Biblical and Modern Hebrew language studies. Congratulations, Jesse, on your FLAS fellowship!

Interested in applying for FLAS funding through the Jackson School? Find out more here! Applications for the next round of funding are due Jan. 29, 2016.

Want to see more articles like this?  Sign up for our newsletter!
⇒ Learn more about the Stroum Center for Jewish Studies at the University of Washington, our Sephardic Studies Program, or our Israel Studies Program.
Note: The opinions expressed by faculty and students in our publications reflect the views of the individual writer only and not those of the Stroum Center for Jewish Studies.
By Naomi Sokoloff|2017-09-04T22:41:40-07:00November 6th, 2015|Categories: Israel & Hebrew Studies, Naomi Sokoloff's Blog, News|Tags: Hebrew, Israel, Middle East, Naomi Sokoloff|0 Comments