What I Learned at Ladino Day 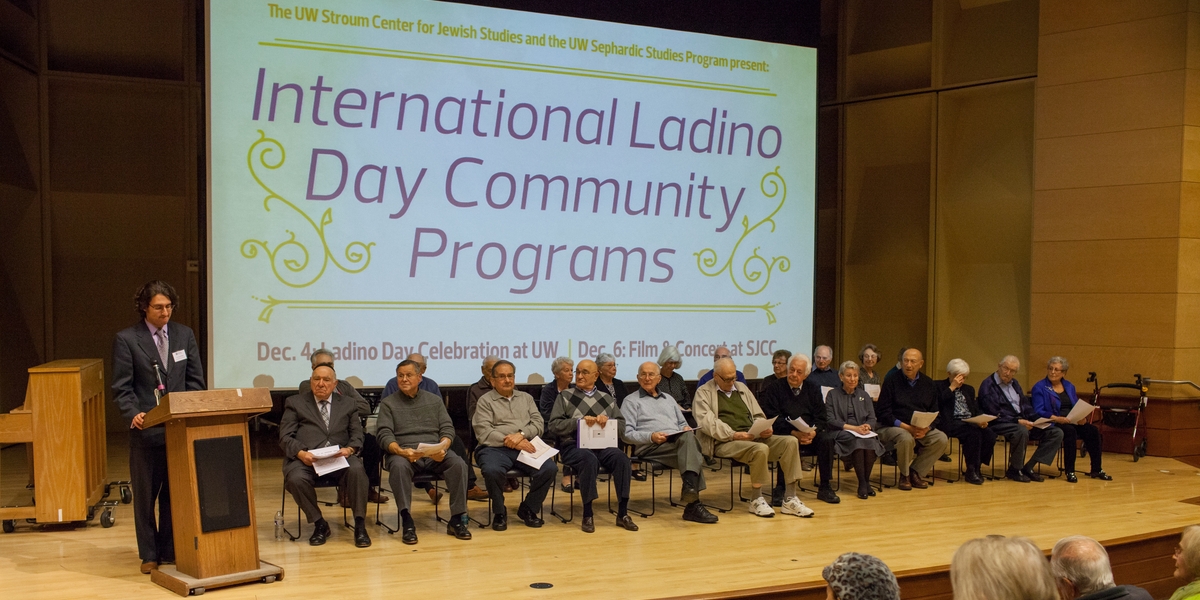 Recently I had the opportunity to attend the International Ladino Day celebration at the University of Washington. As I entered Kane Hall 130 and went to find my seat, I found myself next to a friendly Jewish couple. They quickly informed me that the wife was Ashkenazi, born in Cairo, Egypt, and the husband a Sephardic Jew born and raised in Seattle. The kind older man told me, “I can tell you who came from Turkey and who came from Rhodes, just by looking at their last names,” while the wife went on to share her story of traveling to Seattle. Visiting with this friendly Jewish couple helped me to see the Sephardic community in Seattle in a new, more personal light. Because of this, I enjoyed the festivities much more.

In Prof. Devin Naar‘s class on Sephardic Diaspora: 1492-Present this fall, we often discussed Jewish poetry and songs as a way of interpreting Sephardic culture. At the Ladino Day event on December 4th, I was particularly struck by the music, which included religious songs and chants. These songs were unlike anything I had heard before. It was a combination of rhythmic chanting and using the voice to create a whole new sound. When the Sephardic Adventure campers performed, I could begin to understand what it may be like for a whole community of Sephardic Jews to come together and sing like this; it created a much more powerful idea than just one person alone.

Throughout the event, given its name, Ladino was often used. Stories were told, greetings were read, and songs were sung, all in Ladino

[Editor’s note: Ladino is a name for the Judeo-Spanish dialect of Sephardi Jews]. In high school I had the opportunity to take two years of basic Spanish, and this summer I spent 3 weeks in Spain. Obviously I am not the most accomplished of Spanish speakers, but throughout the event I found myself recognizing many similar words. As I read the English translations, I could understand where the speakers were at in their dialogue by listening for familiar words that I knew. While we had discussed the linguistic similarities in class, it was enjoyable to experience firsthand that I could understand (very) limited Ladino.

My favorite experience of the event by far, however, was listening to the Ladino refranes. (A quick Google search tells me this means “sayings” when translated from Spanish to English.) These sayings were quite humorous, but even more so, they struck me in that they were very similar to sayings that we have in English today. Some that I couldn’t resist writing down were: “The mistake of the doctor is covered by dirt”; and, “From the street of later you go to the house of never,” which I found an interesting because there are so many English sayings on procrastination as well. There were many other proverbs relating to women, such as, “The advice of a woman may be little, but those who do not heed it are crazy.” “Women know all” and “don’t cross a woman” are common themes in English sayings as well.

Overall, International Ladino Day showed me firsthand that there is a huge community that cares about the preservation of Ladino and Sephardic culture. It is an easy subject to discuss in class and forget later, but seeing it up close brings in a personal light that shows how Sephardic identity has an impact on people. There was an entire university lecture hall filled with people who wish to see this language and its identity passed on, as well as people all over the world sending well wishes and helping to preserve it. When Prof. Naar announced that a Ladino language class will be offered next year, the excitement was palpable for the whole community. It was great to make a connection with a community like this, and I am grateful I had the opportunity to learn about and experience Sephardic Jewish culture firsthand.

Lainie Ferguson is a junior at the University of Washington majoring in Political Science. She took Prof. Devin Naar’s class on the Sephardic Diaspora: 1492-Present during Autumn Quarter 2014. Lainie is an intern for the Washington State Democratic Party office in Seattle, and a barista at the Buzz Cafe in Gould and Architecture Halls. She grew up in Cathlamet, WA.