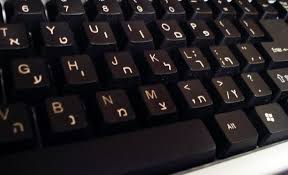 Anyone who learns to read Hebrew faces the challenge of mastering an alphabet that is written sometimes with vowels and sometimes without. Instructors of Hebrew face a perennial challenge deciding when to use vocalized texts and when to expect their students to read texts without vowels.

Lecturer Tovi Romano at the University of Washington has published an article arguing in favor of using vowelled Hebrew texts for beginning and intermediate adult learners in the U.S.  She conducted thesis research on this topic while completing her MA-TESOL degree  (Seattle Pacific University, 2011), and in 2013 presented her findings at the International Conference for Research on the Hebrew Language and Methods of Teaching Hebrew, held at Hebrew University of Jerusalem.

Sound like a tame debate? Not so. Among Hebraists, feelings run high on this issue, and her argument met with passionate response and intense discussion. One important point Tovi makes is that foreign language learners (meaning, for example, English speakers in North America who are studying Hebrew) differ from second language learners (such as English speakers in Israel who are acquiring Hebrew). The distinction matters at a practical level, since the textbooks used in Hebrew instruction in American settings often are produced in Israel and geared toward students studying in Israeli ulpans. The debates are also fascinating for what they reveal about the multiple cognitive processes involved in language acquisition, especially the learning of language with a new alphabet.

Tovi’s complete article, in Hebrew, appeared in “Hed ha-ulpan” published by the Israeli Ministry of Education, in 2014. Click here for the whole essay.

Tovi was born and raised in the coastal town of Bat-Yam, Israel. She received her BA and teaching certificate from Levinsky College of Education in Tel-Aviv and started her teaching career as a Special Education teacher in Bat-Yam. In the past twenty years, she has taught Hebrew for ages 9-99 in different schools and programs in Atlanta and Seattle.  She began teaching at UW in 2009.

Want to see more articles like this?  Sign up for our newsletter!
⇒ Learn more about the Stroum Center for Jewish Studies at the University of Washington, our Sephardic Studies Program, or our Israel Studies Program.
Note: The opinions expressed by faculty and students in our publications reflect the views of the individual writer only and not those of the Stroum Center for Jewish Studies.
By Naomi Sokoloff|2017-09-04T22:42:13-07:00September 29th, 2014|Categories: Naomi Sokoloff's Blog|Tags: Modern Hebrew|1 Comment