Car accidents, kippahs and comradery: What I learned witnessing medical emergencies in Israel 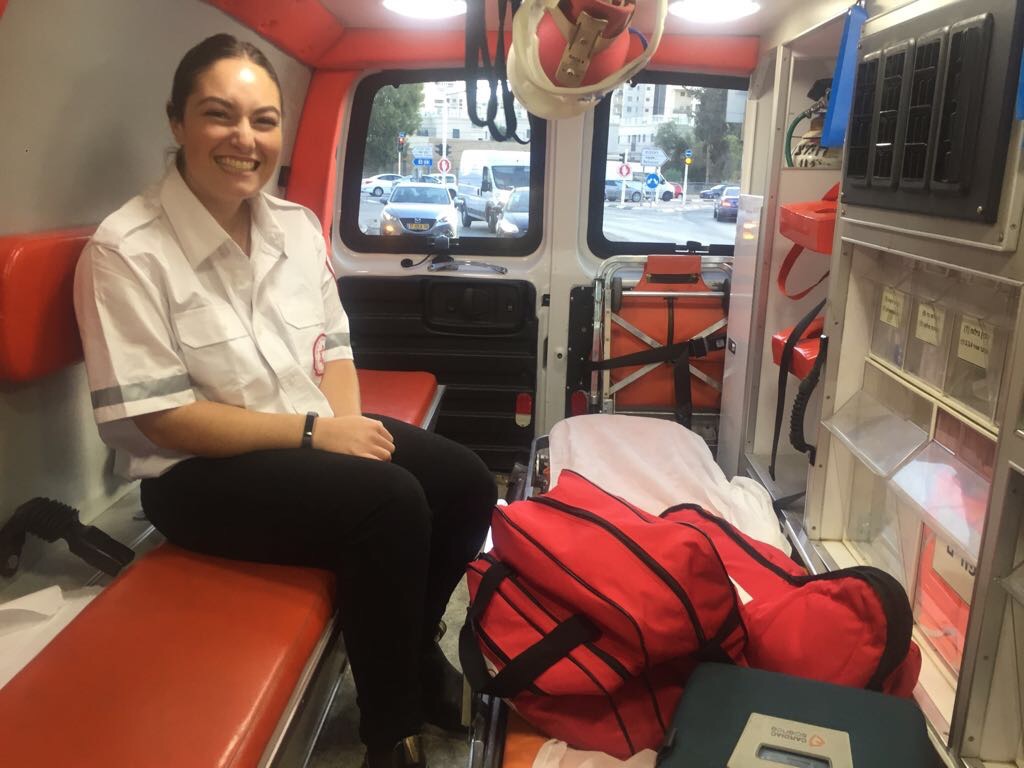 Tess in the back of a Magen David Adom ambulance in Israel.

It’s 75° and sunny, so naturally I do a double take when I look down and see thick, heavy-duty rain boots. Minutes later, I hear what sounds like the pitter patter of raindrops. Rain boots? Raindrops? Instantly I feel like I am back in Seattle.

In reality, though, I am 7,000 miles away in an Israeli operating room. I stand a few feet from the operating table in my Smurf-blue scrubs and stare as the head orthopedic surgeon aggressively shoves a metal scope into the patient’s flesh. Watery fluid flushes out of the patient’s open shoulder and splatters the surgeon’s durable boots as it is hastily funneled into a large plastic container. Maybe it is the smell of burning flesh, or the close look at a torn supraspinatus tendon, or the sound of the surgical staff conversing in Hebrew, but I snap back to the reality that I am not in Seattle anymore. 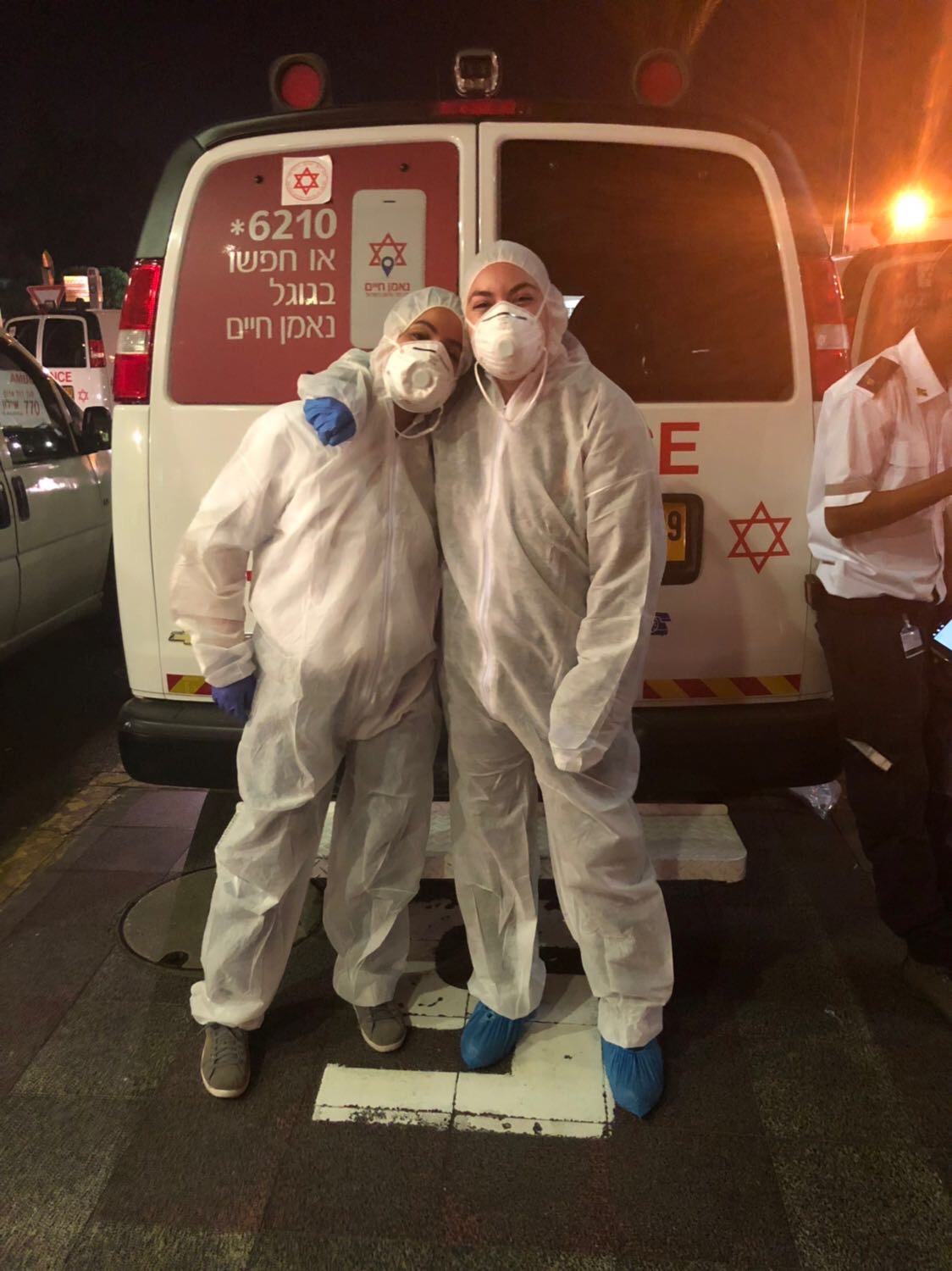 Wearing biohazard protection suits after transporting a patient with an infectious disease.

I have been living in Tel Aviv for five months, participating in a medical exploration program called Voyage to Medicine. Each day I commute to Assaf Harofeh Medical Center, where I take medical classes and shadow physicians in hospital departments ranging from Obstetrics to Geriatrics. Once a week I volunteer as a first aid responder on ambulances throughout Tel Aviv as a part of Magen David Adom, the Israeli Red Cross.

My exposure to different medical phenomena has been extensive. In one day alone, I sat in on an oncology consultation, watched a bleeding patient get prepped for trauma surgery, and comforted a scared woman in the back of an ambulance. The intimate, vulnerable, and intense interactions I have witnessed have given me insight into the kinds of values Israelis prioritize in times of need.

If you have ever waited in a line in Israel, you know that patience, manners, and courtesy are not necessarily qualities commonly associated with Israeli culture. It can be quite intimidating when it feels like everyone is aggressively in a rush at all times. So on my first ambulance shift, when we were called to a car accident on the freeway, I was a little nervous to be standing in the midst of so many feisty drivers. To my surprise, however, as we tended to our patient, car after car slowed down to ask if we needed any assistance. From the road, passersby could not see much of what was going on, but the perception that someone needed help was enough to cause them to cross several lanes of rush-hour traffic to ask. The selflessness and accommodation was overwhelming.

This was not an isolated incident, either. Over and over, we would arrive to calls, and people —neighbors, bystanders, the owner of the corner store, or the like— would appear out of nowhere to offer whatever help they could. It is a popular joke here that Israelis are like sabra: a desert plant with a thick, thorny skin and a soft, sweet inside. Israelis may sometimes come off as prickly at first, but when someone needs help, they shed their outer layer, exposing a well of tenderness and compassion. 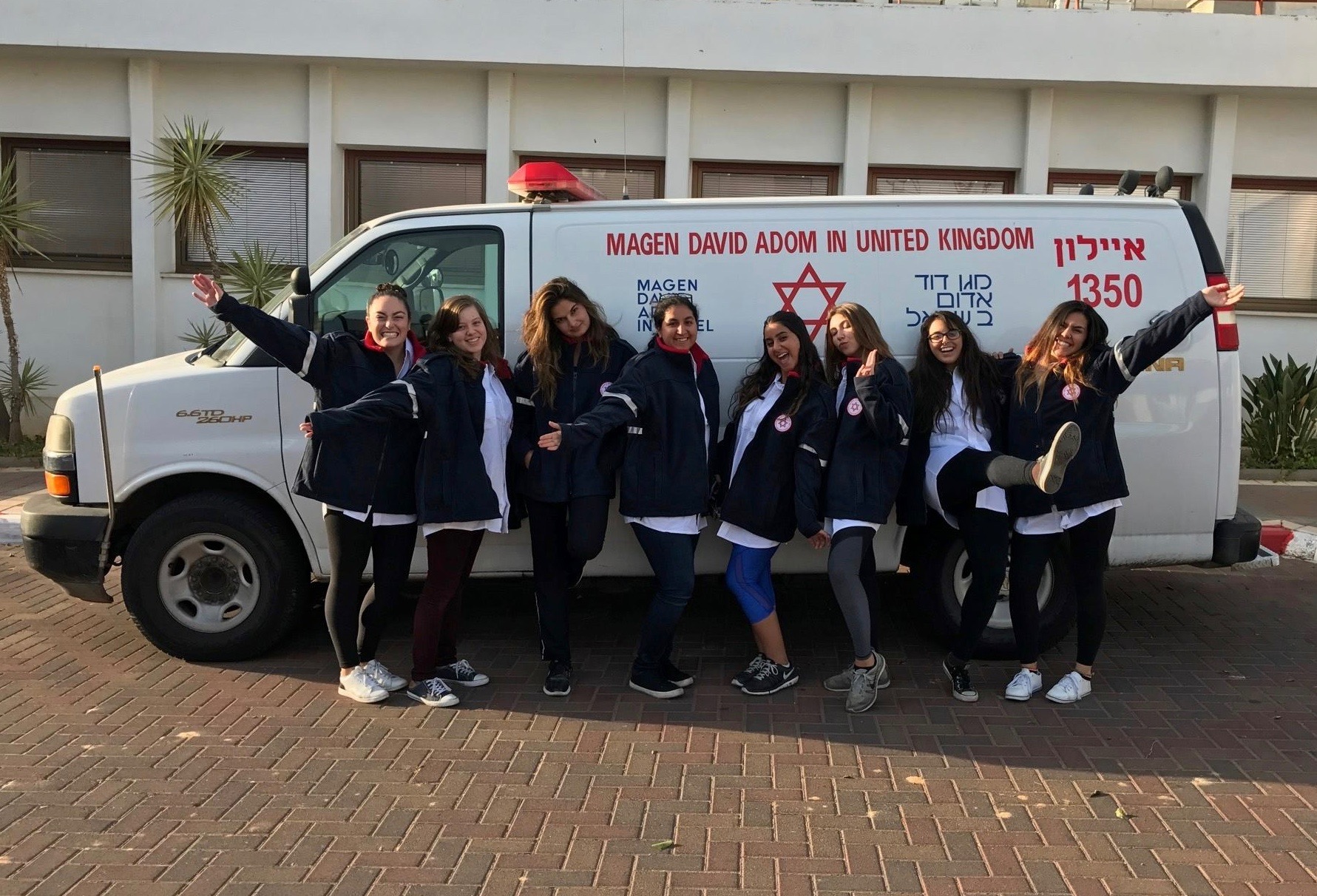 Tess and classmates after completing their first aid certification course.

Values were not only revealed when offering help to others, but also when individuals themselves underwent a scary experience. We once received a call for a man who had been riding a motorcycle on the freeway when he was hit by a car. He flipped over three times. Our ride to the hospital was unusually bumpy, and the patient’s kippah kept slipping off his head as he lay on the gurney. Each time we hit a bump or a turn in the road it would fall, and each time he would grab it and place it back on his head. Over and over and over. I do not know exactly what his kippah meant to him in that moment—perhaps it represented security and consistency, perhaps he held it close because he was thankful that he had survived, or because he thought it was protecting him, or perhaps it was just habit. Regardless, keeping it on his head was his number one priority. At first, I could not understand why he would not let us hold onto it until we arrived at the hospital, but it occurred to me that perhaps for him it was not a burden, but a blessing. In his time of uncertainty and pain, his kippah —his faith—was of utmost importance.

Helping others and maintaining personal safety are strongly held values for many here, but what happens when the two collide—when helping someone else puts your life in danger? In our first aid training course, one of the topics we discussed was terror attacks. How do you approach a dangerous scene? If there are multiple victims, how do you choose who to treat first? And the most difficult question for our group: if the terrorist is injured, do you treat him or her?

Some students rushed to say, “No! Why should we risk our lives and use limited resources to help someone who attacked people just minutes earlier?” Others claimed that they would like to think that in the moment they would help, but had a hard time imagining how they could stay unbiased enough to provide good care. Others argued that first responders do not know the whole story and therefore cannot judge who lives and who dies—they must simply do their job and treat the injured. Our passionate debate ended with the only thing we could agree on: that there is no simple answer to this morally ambiguous scenario.

When I could not shake this question, I asked an Israeli friend what he thought. He swiftly and confidently said: “Yes, it would be hard, but as long as we are safe the answer is easy: we treat him.” He responded with such certainty and nonchalance that I was taken aback. To me it was a deeply complicated issue, but to him it was simple: if someone is hurt, the right thing to do is treat them, regardless of who they are and what they represent. 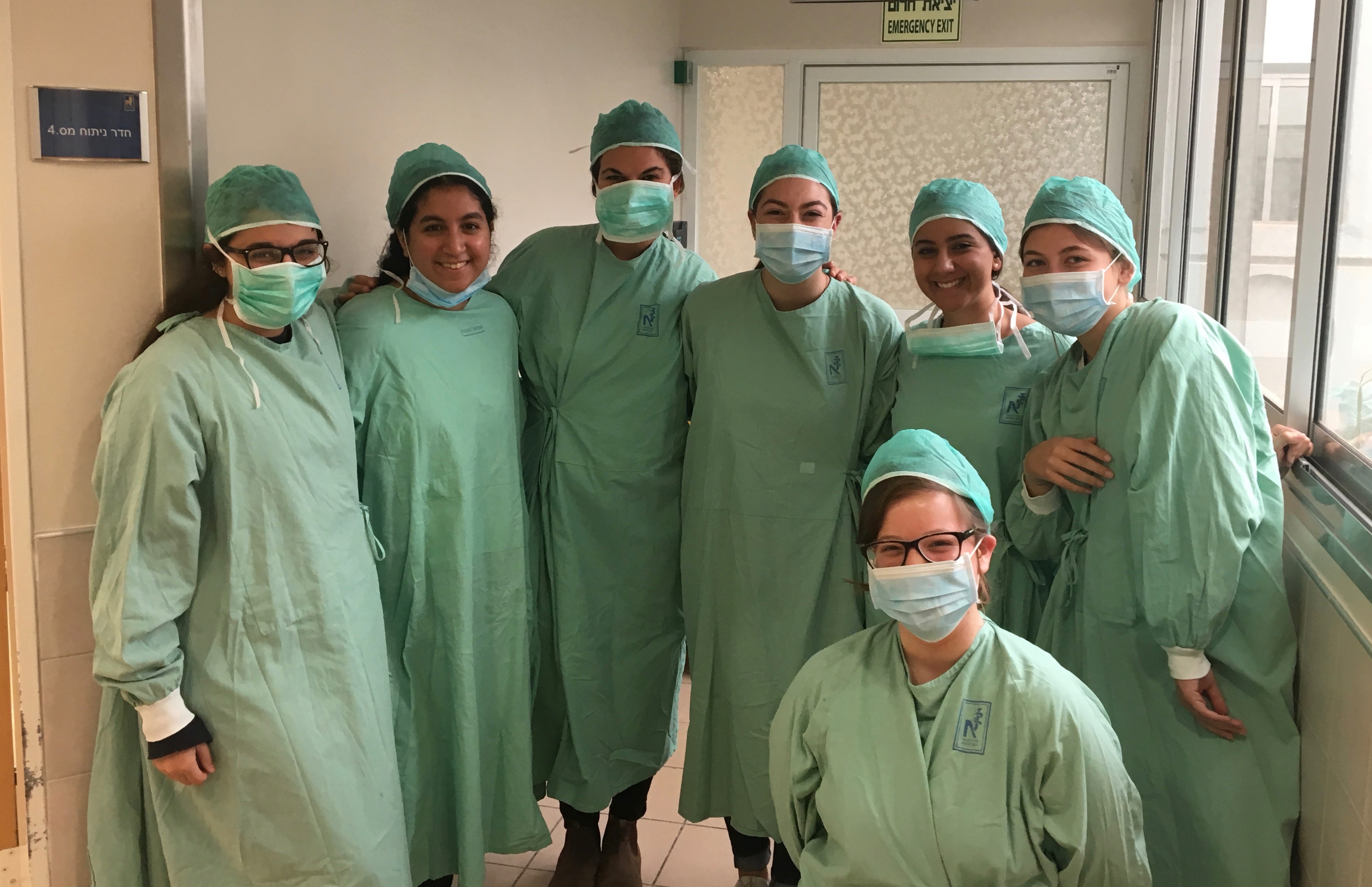 Tess and colleagues before going into surgery.

Israel is often portrayed as hopelessly divided and deeply conflicted, but living here gives you a better idea of what it is really like. Certainly, Israel is not perfect, but it does have a lot to be proud of. They say that difficult times either bring out the best or the worst in people. My time in the hospital and the ambulance—places notoriously associated with bad news—have revealed this country’s strength in responding to disaster and hardship. The people here are selfless, they are faithful, they are deeply compassionate, but most of all they are human. They cry, they pray, they argue, they love, and they teach. I have learned so much here, and I look forward to returning to the United States with a better understanding of how to approach times of suffering with their sense of strength, resilience, and kindness.

Tess Seltzer is a third-year UW student majoring in Medical Anthropology & Global Health. She is interested in the intersection between art and healthcare, and plans on working in the field of Prosthetics & Orthotics where she can design artificial limbs. With her Opportunity Grant, she has spent a semester in Israel studying medicine and learning more about the Israeli medical system. Follow her on Instagram (@tess_seltzer) to see more photos.