The Buzz Without the Caffeine 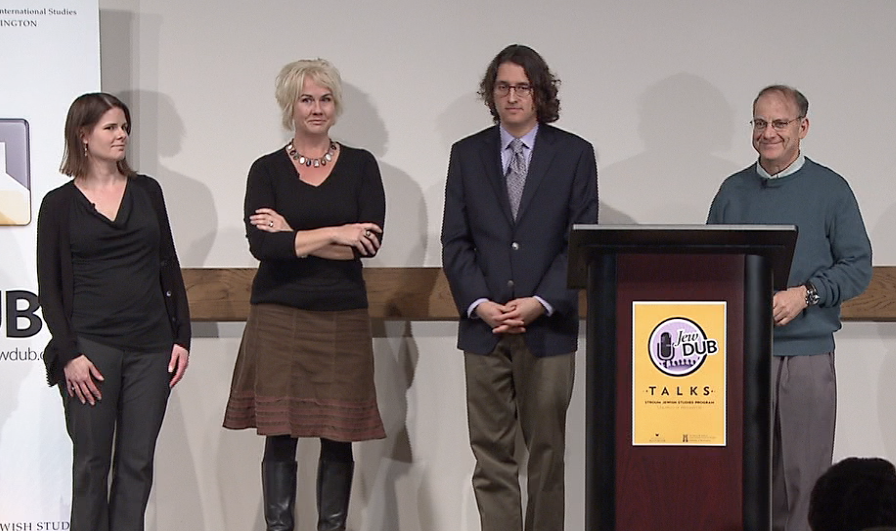 When most people make a plan to attend an academic lecture, usually they have to allow enough time in their schedule to stop by and grab a triple shot vanilla latte to keep them awake for the whole thing. Not that academic talks aren’t  interesting (they are!), it’s just that sometimes the format of the whole lecture can be a bit overwhelming, even for this PhD student who loves to listen to anyone talk about anything Jewish-history-related. The Stroum Jewish Studies Program, thanks in part to the TED Talk model and with the help of a grant from the Seattle Jewish Federation, has, in my opinion, successfully broken the mold.

Four academics from the University of Washington, Professor Devin Naar, Professor Shalom Sabar, Professor Sarah Stroup, and Professor Barbara Henry, all illuminated unusual aspects of their research in 15 polished minutes. Professor Henry’s talk, entitled “So Why Yiddish?,” was initially as comical as Zayde’s jokes on Shabbos, but it ended on a serious note contemplating how we relate to the past. Although she grew up “goyishah” in New Jersey, she came to her humanistic appreciation for Yiddish culture vis-à-vis an appreciation for her Jewish neighbors. Professor Devin Naar, on the other hand, explained how he came to study Sephardic Jewry in Salonika in his talk, “In Search of Uncle Salomon.” His journey began with a difficult archival find in his grandparent’s attic: a document submitted to the Holocaust Museum (Yad Vashem) in Israel which stated the details of his brother’s death as “unknown, unknown, unknown.”

Professor Sabar (an art historian visiting from the Hebrew University of Jerusalem) gave a wonderful microhistory of a Jewish ritual in his talk, “Why Break a Glass at a Wedding?”. Instead of the common assumption that the ritual stems from remembering the destruction of the Temple, Sabar argued that the custom actually comes from Germany of all places. He did a wonderful job of taking us through hundreds of years of folklore and history in the compelling 15-minute span of  his talk. The interaction between cultures was also at the heart of “The Myth of Tradition,” the fascinating lecture by Professor Stroup of the Classics Department. She posited the notion of “cultural adaptability”–breaking tradition, yet remaining recognizable (as differentiated from assimilation)–as key to the Jews’ survival over the millennia. Judah Maccabee, Alexander the Great, and an ancient Greek-Jewish writer named Ezekiel were Professor Stroup’s case studies, and her archaeological work at Dor, Israel, served as additional evidence.

The wonderful thing about the JewDub Talks is that they really featured 15 minutes of the professor’s best work, presented in a manner that was thoughtful and engaging. Lauren Spokane, the Associate Director of the Stroum Jewish Studies Program, did a nice job weaving us seamlessly through the talks as the evening’s MC. We learned about fascinating historical puzzles and personal narratives without the cumbersome historiography, lit review, or other generally less than thrilling details of academic lectures. In otherwords, I stayed awake without my mochachino and hey, I even learned something! Lux sit!

Want to see more articles like this?  Sign up for our newsletter!
⇒ Learn more about the Stroum Center for Jewish Studies at the University of Washington, our Sephardic Studies Program, or our Israel Studies Program.
Note: The opinions expressed by faculty and students in our publications reflect the views of the individual writer only and not those of the Stroum Center for Jewish Studies.
By Sarah Zaides|2017-09-04T22:42:44-07:00December 6th, 2012|Categories: Arts & Culture|Tags: Ancient World, Culture, JewDub Talks, Jewish Studies, Sephardic, Yiddish|0 Comments