The Jews of Kurdistan: How Kurdish Jews became Israeli 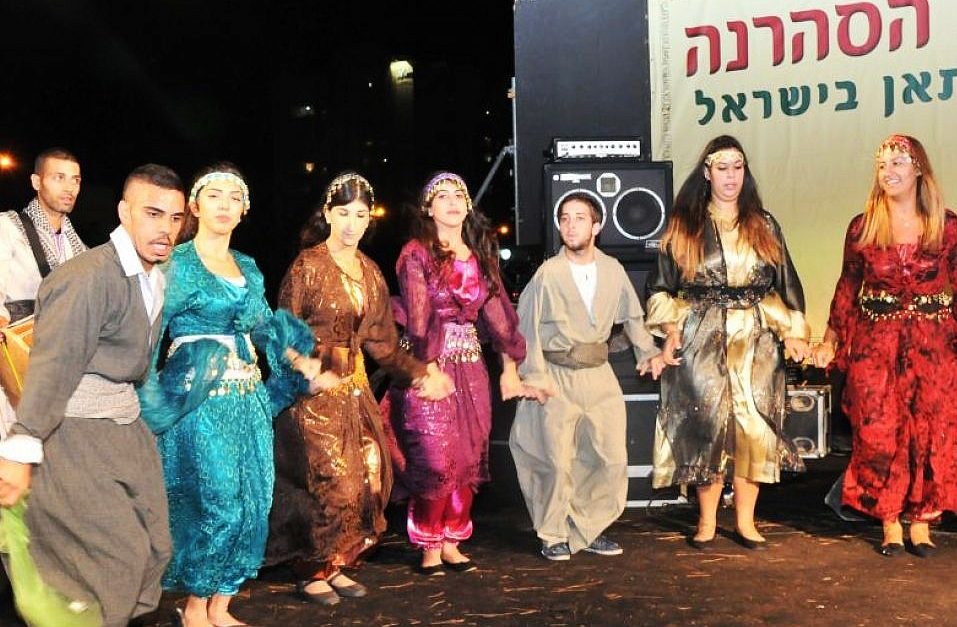 Kurdish Jews in traditional clothing at the 2013 Saharane festival. Via the Times of Israel.

Every Sukkot, the Kurdish Jews of Israel gather to dance, eat delicious foods and share stories about their homeland — the historic Kurdistan, now divided between Turkey, Syria, Iran and Iraq — in the Saharane festival.

The Saharane festival was historically celebrated around springtime and is similar to the Newroz festival, which has Zoroastrian origins and is celebrated by diverse communities in western and central Asia to mark the beginning of spring and the blossoming of nature after winter. Saharane celebrations take place in various cities in Israel, with the biggest gatherings in Jerusalem drawing around 13,000 attendees.

Today, there are around 200,000 Jews living in Israel coming from Arab, Persian, Turkish and Kurdish lands, with the largest migration having taken place between 1948 and 1950. Currently, there are only around 500 Jewish families remaining in what is modern Iraqi Kurdistan. Why did the Jews of Kurdistan leave their homeland and settle in Israel?

The departure of Kurdish Jews from Kurdistan 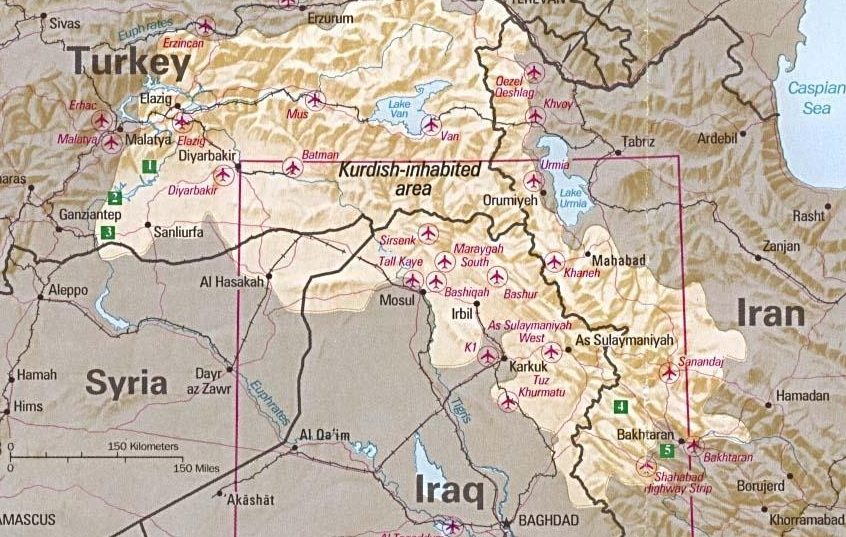 The modern-day region of Kurdistan. Via Wikimedia Commons.

Though nationalist Kurdish organizations have tried to gain independence or a certain level of autonomy, especially throughout the 20th century, Iraqi Kurdistan, known as the autonomous Iraqi Kurdistan region, is the only autonomous Kurdish region today.

On the eve of Israel’s establishment, about 25,000 Jews lived in Kurdistan. The majority of Kurdish Jews were located in Iraq and lived in harmony with their Kurdish Muslim neighbors. They spoke Aramaic, which had been the lingua franca of the Middle East before Arab armies conquered Mesopotamia in the 17th century.

Immigration to the land of Israel/Palestine began as early as the 16th century, but it was not until the early 1950s that the majority of Kurdish Jews left historic Kurdistan. That was when the Iraqi government passed laws canceling citizenship and freezing the property and assets of many Iraqi Jews.

The passage of these laws coincided with a series of bomb attacks on Jewish synagogues, cafes and other targets of Jewish life in Baghdad. The influence of Nazi doctrine became increasingly apparent in public speeches in Iraq and gained popularity among the general population. 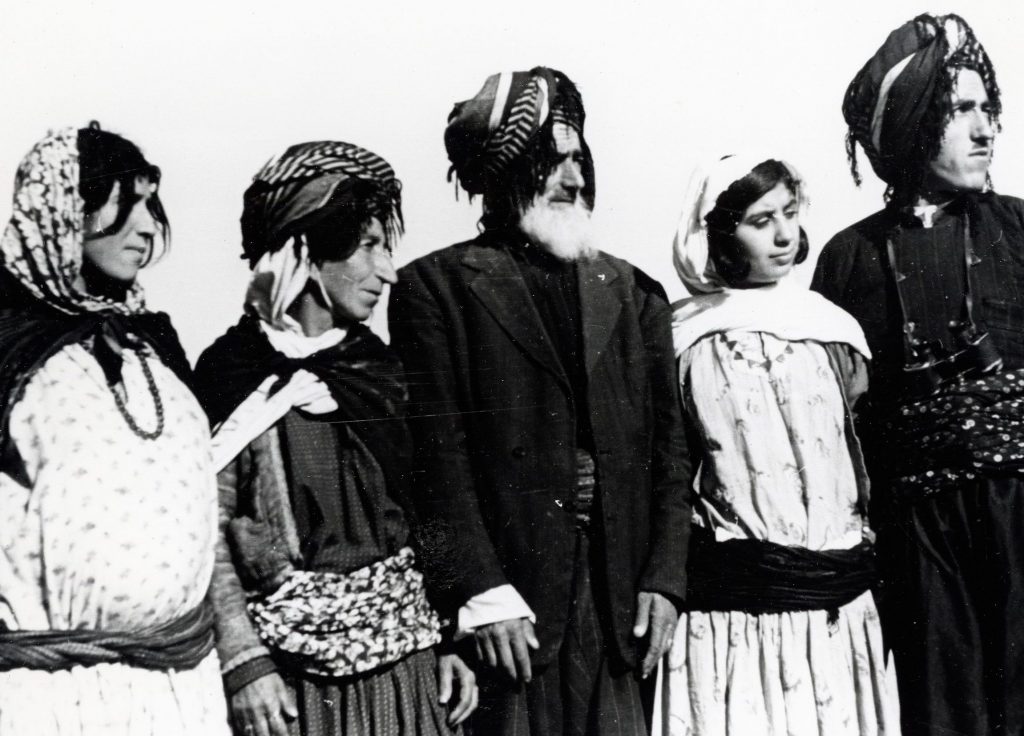 Refugee Kurdish Jews in Tehran, Iran, in 1950. Via the Magnes Collection of Jewish Art and Life, UC Berkeley.

With the (financial) help of the American Jewish Joint Distribution Committee, also known as the JDC, over 120,000 Iraqi and Kurdish Jews were airlifted to Israel. This massive emigration in the early 1950s came to be known as Operation Ezra and Nehemiah and paved the way for later airlifts of Jews in the Middle East and all over the world.

Today, the largest concentration of Kurdish Jews is in Jerusalem. While many of the Kurdish immigrants who came to Israel had an agricultural background and integration into urban life in Israel was hard at first, the majority of Kurdish Jews today define themselves as Israeli and have adopted Hebrew as their primary language. Intermarriage between Jews of various ethnic background is also increasing in Israel. 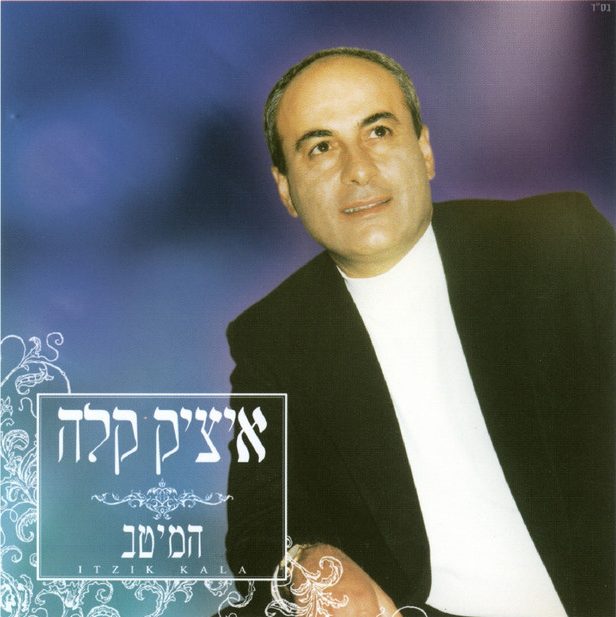 The Saharane festival has remained an integral part of Kurdish-Jewish life in Israel today and is celebrated by people of all ages. Just as they did in their historic homeland, Kurdish communities gather and spend their days together singing, dancing and sharing traditional Kurdish dishes.

In addition to keeping Kurdish traditions alive, the festival is used as an opportunity for the community to highlight and celebrate Jewish Kurds who have attained important positions in Israeli society. Examples include Itzik Kala, an Israeli singer of Kurdish descent who sings in Aramaic, Kurdish and Hebrew and who has released 30 studio albums to date, and Moshe Barazani, an Iraqi-born Kurdish Jew and member of the Olei Hagardom, the Jewish underground fighters executed by the British in Mandatory Palestine, who are memorialized and widely commemorated as national heroes in Israel today.

The past few years have seen an emergence of organizations that foster Kurdish-Israeli relations, such as the Kurdish-Israeli Friendship Association or Jewish Coalitions for Kurdistan. The founder of Jewish Coalitions for Kurdistan stated: “There is a kinship between the two peoples, the Jewish one and the Kurdish one, that transcends merely political calculus. We are two nations of several million people who by and large both stand for Western values such as tolerance, progress, equal rights for women and who, in the Middle East and beyond, stand up to tyranny and fanaticism.”

Many of the almost 200,000 Kurdish Jews in Israel and their descendants have integrated fully into Israeli society. Yet, they continue to have a strong cultural connection to their homeland and remain highly political. This became especially apparent when Iraqi Kurds voted for independence in a nonbinding referendum and Kurdish Jews in Israel gathered in Jerusalem’s Independence Park in support of independence. Increasingly, Muslim Kurds are also visiting their old neighbors in Israel for special gatherings like the Saharane festival.

The ties between Kurds in Israel and the Kurdish heartland have deepened, and Kurds in both areas promote cultural initiatives. Although there are some political initiatives that push politicians in Israel and the Kurdish Regional Government to expand on their official support of each other, the motivations behind these initiatives are often cultural and nostalgic. Many of the Kurdish Jews in Israel just hope to explore their family roots, visit their childhood friends and celebrate the Saharane festival with their Muslim Kurdish, Muslim Iraqi and Israeli Jewish friends in hopes of a multicultural and peaceful Middle East.

Pinar Kara is a Ph.D. candidate at the Henry M. Jackson School of International Studies focusing on immigrant and civil society studies in Germany. She is currently conducting dissertation research in Berlin as a fellow of the Free University’s Berlin Program for Advanced German and European Studies.