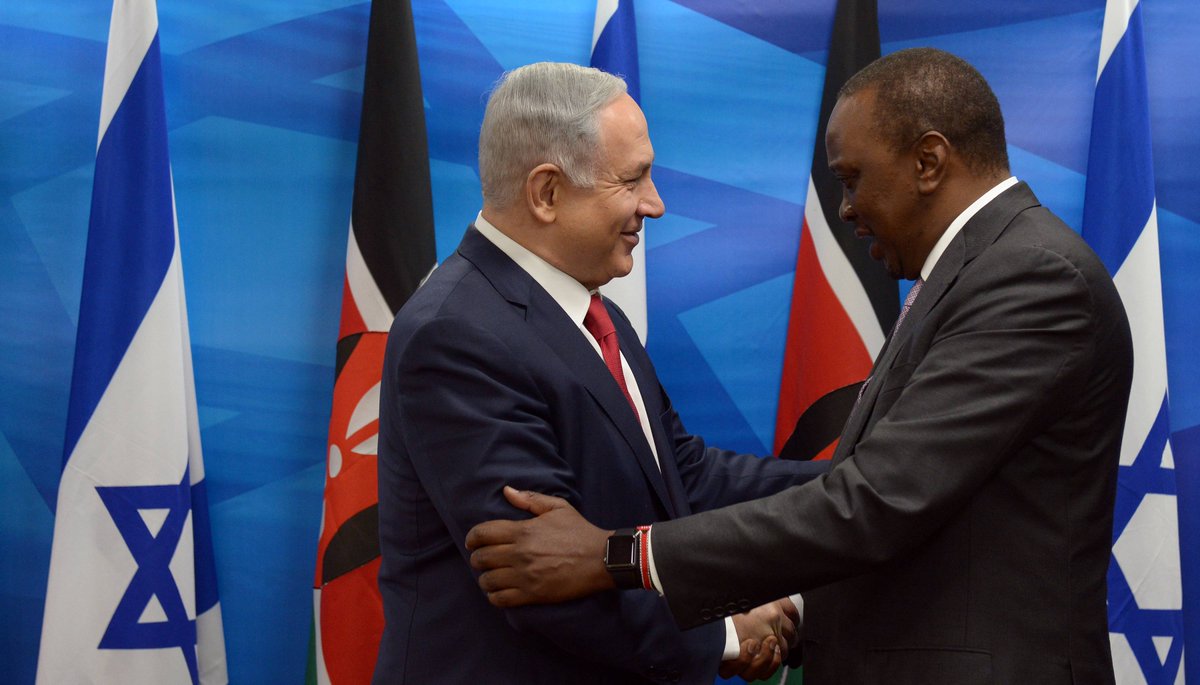 In 2017, Israeli Prime Minister Benjamin Netanyahu became the first leader outside of Africa to address the Economic Community of West African States (ECOWAS) Heads of State and Government Summit in Liberia. The core message of his speech was: “Israel is coming back to Africa and Africa is coming back to Israel. I believe in Africa.” He added that Africa is one of Israel’s top priorities, national and international. The summit afforded him the opportunity to meet with ten presidents for at least 30 minutes.

In recent years, Israel has been making great strides to mend severed relations with the continent. There is one overarching goal: to win Africa to Israel’s side. In a 2017 meeting with Israeli ambassadors to Africa, Netanyahu was unequivocal: “The first interest is to dramatically change the situation regarding African votes at the UN and other international bodies from opposition to support…This is our goal…”

Israel’s PM Benjamin Netanyahu with West African heads of state at the ECOWAS summit in June 2017. Via the Israel Government Press Office.

Netanyahu is the first prime minister to visit Africa after almost three decades of diplomatic standoff between Israel and majority of the countries on the continent. Israel is taking steps to reconnect with African nations in order to regain its observer membership status in the African Union and to get these nations’ support in the international organizations of which Israel is a member.

From 1948, when it became an independent state, till today, Israel has sought the international community’s recognition of its statehood and policies, and the status of Jerusalem as its capital. In the 1950s and 1960s, Israel and many African countries, especially those south of the Sahara, established cordial relations.

Ghana was the first African country to recognize the statehood of Israel and became the gateway for Israel-Africa relations. In 1956, Israel established its consulate in the yet-to-be independent country of the Gold Coast (now Ghana) with approval from Britain, since the Gold Coast was a British colony at that time. This relationship was strategic for Israel, because Ghana’s first president, Dr. Kwame Nkrumah, was pro-Israel, and was a highly influential leader in western Africa, and arguably the entire continent. (It is not surprising that he was voted as the African of the Millennium by the BBC World Service.)

By the early 1970s, Israel had established, and maintained, full diplomatic relations with thirty-three countries in sub-Saharan Africa. Nonetheless, it had (and still has) rocky relations with its North African neighbors. 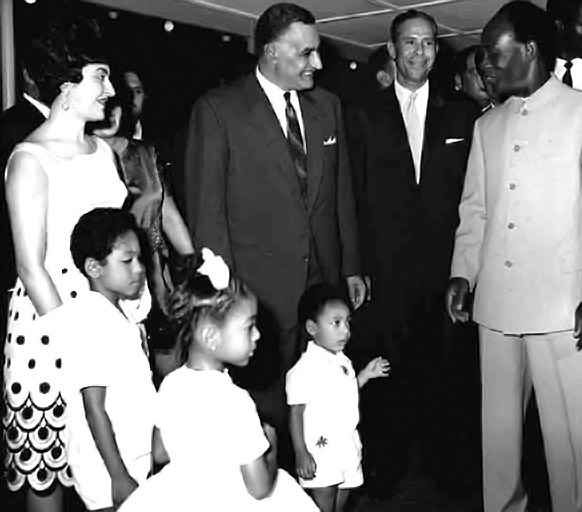 To put Israel-Africa relations in historical perspective, the 1950s and 1960s was a period when the doctrine of Pan-Arabism rose in North Africa, led by Egyptian political leader (and later president) Abdel Gamal Nasser, at the same time that Pan-Africanism and efforts towards decolonization — spearheaded by Ghana’s Kwame Nkrumah — disrupted the larger global politics of the Cold War, and the determination of Third World countries to remain neutral.

Amid these global power struggles, Israel’s relationship with sub-Saharan African nations developed, albeit not without complications, in the context of the pressing political, social, and economic challenges these nations faced in this period. Many independent African states saw Israel as a partner to learn and benefit from through its technical expertise in diverse fields, to prepare their economies for rapid development.

Relations started deteriorating in the late 1960s. Israel’s military occupation of the West Bank, the Gaza Strip and the Golan Heights after the Six Day War in 1967 altered its relations with Africa.

Following the Arab-Israeli war of 1973, and in compliance with a resolution of the Organization of African Unity (now the African Union), a number of key countries cut diplomatic relations with Israel and adopted a pro-Palestinian stance. Israel lost its status as an observer member of African Union summits in favor of Palestine.

However, in the present day, the sour relations between Israel and African nations are being reset and a rapprochement is flourishing. Netanyahu’s aggressive policy of reaching out to Africa is yielding positive results. 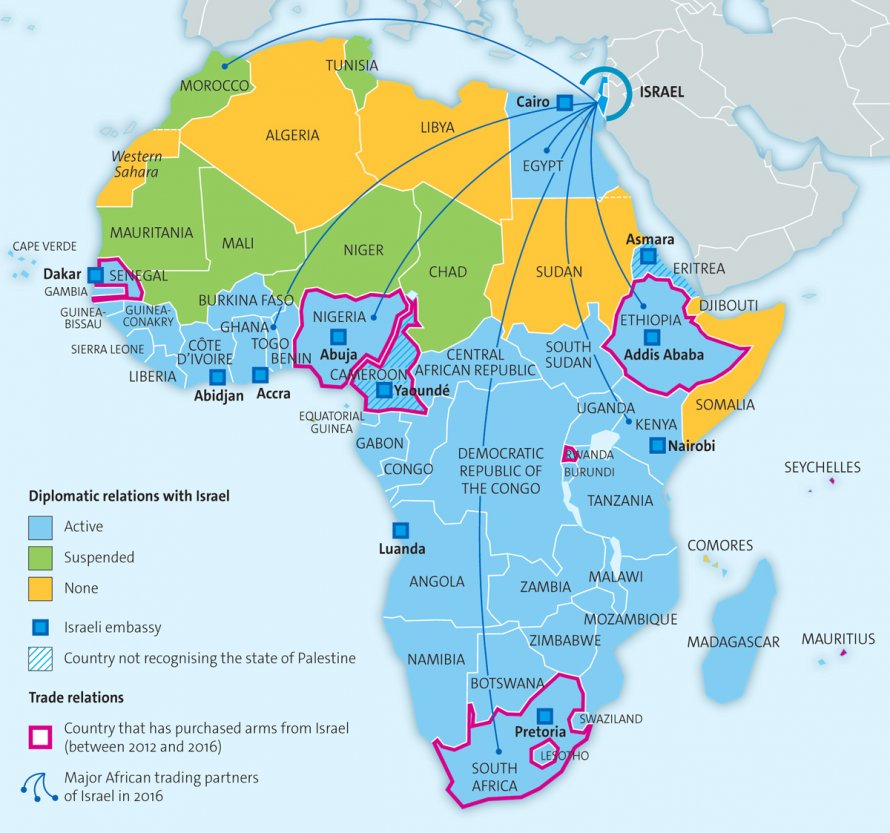 Map of Israeli diplomatic and trade relationships in Africa. Via Le monde diplomatique.

According to the Jewish Virtual Library, Israel currently has full diplomatic relations with 41 out of 46 sub-Saharan African countries and embassies in 11 out of 54 African countries: Rwanda, Senegal, Egypt, Angola, Ghana, Ivory Coast, Ethiopia, Nigeria, South Africa, Kenya and Cameroon.

Arguably, Netanyahu will become the Israeli prime minister who has visited Africa the most within a short period of time, visiting, among other nations, Ethiopia, Kenya, Rwanda, and Uganda in 2016. Development and innovation, notably in agriculture, water management, and communication technologies, are the powerful bargaining tools — “development diplomacy” — that Israel uses to court African countries.

In his address to ECOWAS leaders in 2017, Netanyahu promised his audience: “In every field, our technology is there, it’s ready to work with you, to provide solutions to some of the most pressing issues of Africa. We want to help your soil become more fertile, your water reusable, your cities safer, [and] your air cleaner.”

Netanyahu’s strategy is working. Israel had planned the first ever Africa-Israel Summit, to take place in October 2017 in the West African nation of Togo, though the event was canceled due to political unrest in the host country. 48 percent of African nations were likely to attend the summit.

Today, Israel is also building connections with Arab League members, and observer members, in Africa. In February 2020, as the Arab League rejected the United States’ Peace Plan for Israel and Palestine, Sudanese leader Abdel-Fattah Burhan met Netanyahu in an effort to normalize relations. It was described as a major diplomatic breakthrough for Israel and Sudan, an Arab and African state that is a long-time member of the League.

Another Arab League country that Israel is wooing is Somalia. Netanyahu and Somali President Hassan Sheikh Mohamud recently had high-level contact, the first ever between the two countries. Sudan is on the US list of state sponsors of terrorism, and seeks Israel’s mediation with the US to lift the sanctions, while Somalia hopes to get Israeli support in the fight against al-Shabbab, the Islamist terrorist organization. Chad, an observer member of the Arab League, is also courting Israel for intelligence assistance to combat terrorism. In 2019, both countries renewed diplomatic relations, which had been cut in 1972.

Influences of citizen and religious diplomacy

In a 2012-2014 poll on Israel’s influence on the world by the BBC World Service, Israel is viewed most positively in the United States and in sub-Saharan Africa, compared to other parts of the world. Ghana, Kenya, and Nigeria are among the countries that now view Israel favorably.

The support for Israel in sub-Saharan Africa by ordinary citizens is partly due to the rise of Pentecostalism and evangelical Christianity in these countries. These Christians consider the Holy Land of Israel to be their spiritual home and support defending Israel’s interests.

The Africa-Israel Initiative was launched in Ghana in 2014 as a Christian advocacy group to further the interest of the Jewish State. This support has as much religious significance for African chapters as it has political benefit for Israel. The former leader of the Ghana chapter noted, “We want African countries to support Israel at the United Nations level, and for Africa to be blessed by the God of Israel for supporting Israel.”

Out of the nineteen countries represented in the African-Israel Initiative, sixteen are in Africa. Israel enjoys both the citizen and religious diplomacy of these chapters.

Political recognition and development are meeting at the crossroads of Israel-Africa relations.  Netanyahu’s Africa policy is working effectively to build ties in the region, and these ties are likely to get stronger. States are rational actors and will cooperate when it is in their interest.

Ethiopia, Ghana, and Kenya are among Israel’s current strong allies and are lobbying for the Jewish State to regain its status as an observer member of the African Union.

Development and the fight against terrorism are among the major challenges in Africa today, and Israel seems to have the solutions. The iterative approach, transformational leadership style, and the strong diplomatic skills of Israeli Prime Minister Benjamin Netanyahu are also important factors in winning African leaders over to pro-Israel policies.

It is against this backdrop that Israel is making strides in Africa, even in Muslim-majority countries. Slowly but surely, Israel is strengthening ties once again in Africa.

Francis Mbawini Abugbilla is a Ph.D. candidate in international studies and the International Policy Institute fellow at the University of Washington’s Henry M. Jackson School of International Studies. He is also an associate researcher at Laboratoire de Sociologie Economique et d’Anthropologie des Appartenances Symboliques (LAASSE) at the Université Félix Houphouët-Boigny in Côte d’Ivoire. He researches conflict resolution and peacebuilding mechanisms in post-conflict societies. His dissertation focuses on how post-conflict peacebuilding mechanisms affect the prospects of reconciliation in Africa. His secondary research interests include human rights, governance, and youth empowerment. He held the 2019-2020 Benaroya Israel Studies Fellowship in Jewish Studies.