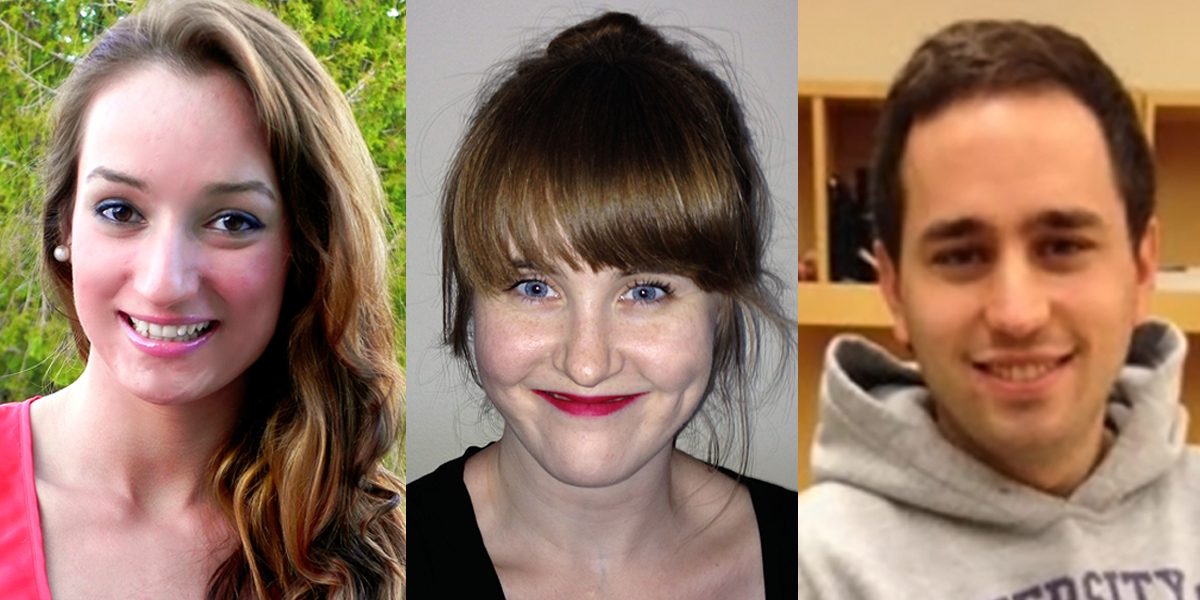 This year the University of Washington’s Henry M. Jackson School of International Studies has won a record number of Foreign Language and Area Studies (FLAS) fellowships. Look how many students of Hebrew, pursuing a range of interests, have recently garnered these prestigious awards! Funding comes from the U.S. Department of Education, through the UW Middle East Center – one of eight national Resource Centers in JSIS. Robyn Davis, Fellowships Coordinator at UW, notes, “We’re always trying to get more applicants for Hebrew!”

Tomer Vandsburger, who has received an award for the academic year 2014-2015, grew up in southwest Virginia where his family was only one of five Jewish families in town. At home his parents spoke exclusively in Hebrew, so he grew up with a competency in conversational Hebrew, but he never learned how to read or write in the language. Now studying employee benefits law at the UW School of Law, Tomer applied to the FLAS program with the goal of improving his ability to speak, read, and write in Hebrew. As part of the FLAS program he will also study Israel’s tax and pension laws. In 2014-15 he is enrolled in NELC’s  Intermediate Modern Hebrew sequence taught by Tovi Romano.

With her summer 2014 FLAS support, Mary K. Fitzmorris completed the intensive Beginning Modern Hebrew course at UW taught by Hadar Khazzam-Horovitz. Molly is a first-year PhD student in the Department of Linguistics and a Graduate Fellow at the Stroum Center for Jewish Studies, whose research focuses on Ladino. Sometimes called Judeo-Spanish, Ladino is a fusion language deeply enriched by Hebrew and elements of Turkish, Greek, Arabic, French and other vocabulary. Molly recently completed her M.A. thesis, entitled, “The Last Generation of Native Ladino Speakers? Judeo-Spanish and the Sephardic Community in Seattle.” She is currently working to organize Seattle’s second International Ladino Day (taking place Dec. 4) and is planning fieldwork in Buenos Aires later this year to study the Ladino spoken there.

Jason Sanders received a FLAS award to study Hebrew during summer 2014 between the first and second years of his MA program in Middle Eastern Studies (JSIS). He planned to participate in the Summer Ulpan at The Hebrew University of Jerusalem, but the conflict in Israel at the time forced him to reconsider his options. Rather than going overseas, he worked with a tutor over Skype instead. He writes, “While I am still not glad at all about the circumstances that led me to alter my summer plans, I am definitely happy that I did so. Before the summer, my proficiency in Hebrew was extremely limited. My principle languages at UW had been Arabic and Persian, and my undergraduate degree at Amherst College had been in English of all things. With the personal attention I received from my tutor, however, I was able to make huge strides forward and I am now enrolled in a Hebrew literature course for the fall. And on top of all this, after 140 hours together, I gained a great new friend in my tutor.” After graduating, Jason plans to attend law school at NYU and to pursue a career in government.

Majoring in Political Science with a minor in Middle Eastern Studies, Shirin Lotfi was also awarded a FLAS award for Hebrew for summer 2014 . Her research focuses on regional energy security and Jordan’s emerging nuclear development program. During the summer she was enrolled in Ulpan classes at the Interdisciplinary center (IDC) in Herzliya — though she notes that she learned the most Hebrew simply by carrying on conversations with Israelis. Shirin combines her study of Hebrew with knowledge of Arabic, Farsi, and Urdu. You can read more about Shirin’s research in the Stroum Center’s Fall 2014 Newsletter, or read her blog post “Radioactive Politics in Jordan.”

Information sessions regarding FLAS and the application process will be held October 30 and on several dates in November. For details from the JSIS Office of Academic services, click here.

Want to see more articles like this?  Sign up for our newsletter!
⇒ Learn more about the Stroum Center for Jewish Studies at the University of Washington, our Sephardic Studies Program, or our Israel Studies Program.
Note: The opinions expressed by faculty and students in our publications reflect the views of the individual writer only and not those of the Stroum Center for Jewish Studies.
By Naomi Sokoloff|2022-03-01T16:55:39-08:00October 26th, 2014|Categories: Israel & Hebrew Studies, Naomi Sokoloff's Blog|Tags: Graduate Fellows, Modern Hebrew, Naomi Sokoloff, Undergraduate|2 Comments