Secular? Moderate? Middle Class? Not Quite 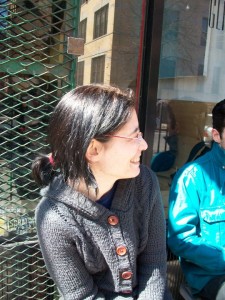 The first Knesset speech of the new MK Dr. Ruth Calderon from the Yesh Atid party received much attention both in Israel and among Jews worldwide, who considered it groundbreaking. Many saw Calderon’s act, a woman reading from the Talmud in the Knesset, as courageous, and also praised her for introducing a “new and higher level of discussion” to the Israeli parliament.

Inside Israel, however, this speech raised much more controversy and critique, not only from the ultra-orthodox, who saw the act as a provocative violation of the status quo, and one that threatens their lifestyle, but also among secular Israelis, who saw it as coercing religion in a way that even religious parties, often accused of coercing religion in the public sphere, never tried. Some were upset by Calderon’s choice to address only Jews in her speech, leaving non-Jews and especially Palestinian MKs out of the conversation; others criticized Calderon’s choice, in her inaugural speech, to ignore two of the most burning issues for Israelis: the negotiations with the Palestinians, which have been ignored by most big parties in the 2013 elections, and the increasing cost of living and diminishing middle class, issues that sparked the mass protests in the summer of 2011.

Calderon’s party, Yesh Atid, is often portrayed as a moderate centrist party, which represents and appeals to secular middle class Israelis. Many attribute its recent success to the 2011 protest and the discontent in the general public towards the existing political parties. In addition, a well-managed campaign for “equal burden,” which framed the ultra-orthodox as a weight on society and the cause of many of its economic problems, while demanding their conscription to the military as a solution, attracted many votes. Recent developments, especially after Yesh Atid’s leader Yair Lapid’s appointment as Minister of Finance, reveal a different story and a much different agenda on security issues, economic issues and state-church relations.  In this post I intend to argue that Calderon’s speech was quite revealing of some of Yesh Atid’s agenda in a way that most Israelis were not aware of during its election campaign.

First, Calderon’s speech reveals that her idea (as well as that of others in her party) of what the Israeli middle class is seems to be sentimental rather than factual. Calderon’s attempt, in her speech, to humbly situate herself as “all Israeli,” came out in the eyes of many as quite elitist. Very few Israelis can tie their personal story into the national story of establishing the state and ingathering of the exiles in the way that Calderon did, and even fewer have such close relations with one of the most successful and privileged dynasties in Israel today as she does with the Lapid family, which she demonstrates in her Talmud edition story.

For secular Israelis (Jews and non-Jews), who are not familiar with the Talmud, Calderon’s choice to bring this specific text, the way she related to it, and her own interpretations of it revealed quite a conservative agenda. Examples of this are found in her story about how studying Talmud helped her connect with her deepest roots in a more authentic way (and therefore may do the same thing to others, whose lives must be “missing something”); in her comment on how Aramaic is “better” than Greek in its use of the word “womb” which leads to a compliment to Chazal (rabbinic authority); where she says that having a wife equals having a home, thus marginalizing and even offending anyone who does not or cannot have a wife; and in describing a wife’s role as passive expectation to her husband who comes back once a year to spend time with her.

Lastly, of all the MKs present in the house, Calderon chose to connect her speech to the words of Naftali Bennet, head of Bayit Yehudi (The Jewish Home), who openly plans to annex C areas in the West Bank and opposes any negotiations with the Palestinians. This could make sense considering the alliance Yesh Atid and Bayit Yehudi had in the coalition building negotiations, but this may also indicate Yesh Atid’s agenda towards the Palestinians, or maybe lack of agenda, which enables them to connect to one of the most hawkish parties in the Knesset.

In summary, Calderon’s act has been revealing of Yesh Atid’s set of priorities in a way that its election campaign hasn’t. In light of that, one should not be surprised with Yesh Atid’s recent withdrawal from some of the promises it made to its electorate, nor should we be surprised when the party’s position with regards to Palestinians is revealed more explicitly. Yesh Atid is not the secular, liberal, moderate, middle class party many thought it is, quite the contrary.

Anat Goldman is a PhD student in the Interdisciplinary Near and Middle Eastern Studies program at the University of Washington. She is currently working on education, nation building, citizenship and identity formation in Israel and Turkey. She also worked on intercultural encounter and identity formation in Israeli social movements. Born and raised in Israel, Anat received her BA and MA at the Hebrew University of Jerusalem and worked as a high school teacher before coming to Seattle.