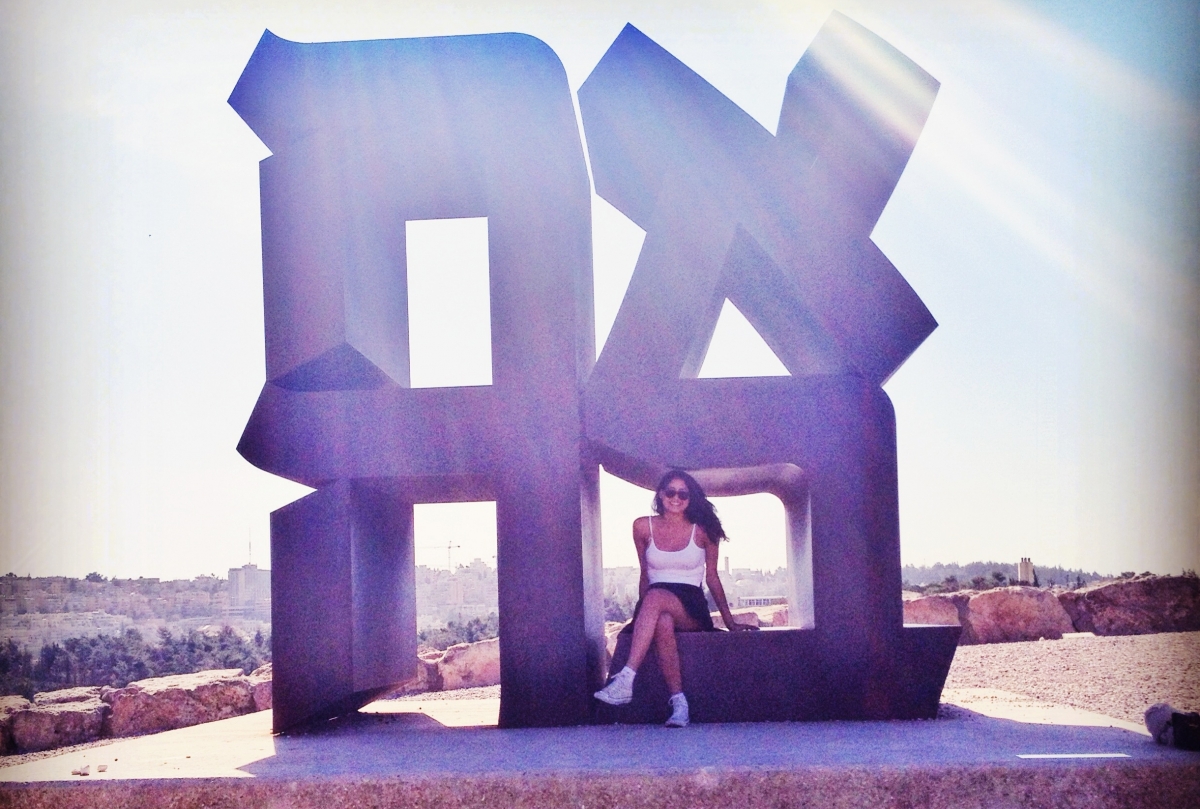 Gabi Natelson won a Travel Grant from the Stroum Center for Jewish Studies to support her study abroad trip to Israel.

Imagine this. You are walking down the streets of downtown Jerusalem and you see the light rail pass. However, as it approaches you notice it is jam-packed with college students. As it gets closer you hear screaming and singing. At first you might think this is just a typical light rail train on a Friday afternoon returning from the shuk, but if you thought that in this case you would be wrong. This was how I spent my last night studying abroad at Hebrew University in Jerusalem, with my new family belting out every Hebrew song we knew. Just a short four months prior, all of these people, the food, the culture, this whole country was a stranger to me. Yet now, these people are my family, and this place is my home.

All through life people told me that Israel was my homeland, it was a place I could always go to and feel safe. However, up until this past January Israel had been a fun place to visit, a place with endless amounts of history, or a place that constantly needs defending. When I look back at the past eight months I spent in Israel, it truly feels like home. Who knew you could feel safe in a place that was constantly in war. Who knew that you could feel safe walking the streets of a foreign country at any hour of the day.

I spent the past four months studying abroad at the Rothberg International School at Hebrew University. Being able to become a local and live in place I had learned about for so long was truly magical. Being able to celebrate Passover in Israel, after spending years ending my seders with “next year in Jerusalem” hoping that one day I could be there. Being able to spend Yom Hazikaron (Memorial Day) and Yom Ha’atzmaut (Independence Day) in Israel was so moving and powerful. I stood at the Kotel with my friends from school, with Israeli families around Jerusalem and with thousands of soldiers who defend Israel, my country, every day. As the then-president Shimon Peres spoke, I felt a sense of community I had never experienced before. Although it was hard to understand everything he said in Hebrew, words that stood out to me were family, together, and am Yisrael chai. At the end of the ceremony I along with a couple thousand people, most of which I didn’t know, stood at the Western Wall and sang “Hatikva,” Israel’s national anthem. At that moment it didn’t matter who you were, where you were from or what your interests are. All that mattered was that we banded together and stood proud to be in Eretz Yisrael.

The past four months was more than just studying at a school abroad, it was living and breathing a new culture, it was traveling and hiking throughout the country, it was taking risks and going out of my comfort zone, it was finding another family, it was a once-in-a lifetime experience.

Gabrielle Natelson grew up in Irvine, CA. She is a senior at the University of Washington majoring in Communications and minoring in Jewish Studies. She won a Jewish Studies Travel Grant to attend the Rothberg International School at Hebrew University in Jerusalem last spring.

Read about our other 2014 Travel Grant Winners. Applications for next year’s grants will be available in early 2015 – check back with jewishstudies.washington.edu for updated application info!