An article in the March 23, 1928 edition of The Jewish Transcript wondered about the future of Yiddish. Image courtesy of The Jewish Sound.

Extra, Extra! Read All About It

An article about “restrictive immigration laws” that asks whether newcomers to this country will learn English — sounds like something ripped from news coverage of President Obama’s proposed immigration reform.

However, I’m not looking at the editorial page of today’s Wall Street Journal or New York Times. I’m peering at the scanned image of the March 23, 1928 edition of The Jewish Transcript. At the top of the yellowed (virtual) page, the paper bills itself as “The Home Newspaper of Pacific Northwest Jewry.” Back then a single copy cost 5 cents; a year’s subscription was $2.00. Now, to mark 90 years of publication of this “home newspaper,” a special theatrical production called “Letters to the Editor” brings to life the history of its surrounding community.

“Letters” is the passion project of Emily K. Alhadeff, Associate Editor of JTNews. She explains, “Given the changing world of media, I thought it was a pretty big deal that the Jewish Transcript had been publishing consecutively since 1924. I wondered, ‘How has Jewish life in Seattle and Washington changed over the course of time? And how has it stayed the same? How has the way we’ve told stories changed?'” With the input of a planning committee, including Tamar Benzikry-Stern of 4Culture and Pamela Lavitt of the Seattle Jewish Film Festival, Alhadeff began working with Book-It Repertory Theatre (who also produced “In the Land of Rain and Salmon” for the Washington State Jewish Historical Society, reviewed here by Prof. Naomi Sokoloff). Grants from 4Culture and the Jewish Federation of Greater Seattle helped to bring the project to fruition for a limited edition run this winter.

Combing through the newspaper’s archives — an initial set is now viewable at this link, thanks to a partnership with the Seattle Public Library — was a formidable task, but Alhadeff found it immensely rewarding. She says, “The most poignant discovery for me, as a young person fairly far removed from the Holocaust, is how early we were reporting Hitler’s rise to power.” Also quite evident, Alhadeff notes: over the decades, the Jewish community of the Pacific Northwest repeatedly considered the same set of issues, such as assimilation, relating to Israel, and how to help those less fortunate.

Concerns about Losing Yiddish and Ladino

A single page of The Jewish Transcript yields a trove of insights into the pressing concerns of Washington’s Jews in the 1920s. Then, as now, assimilation and the risks of cultural adaptation were prominent themes. My eye was immediately drawn to a serious-looking headline, “Is the Yiddish Language Doomed to Die Very Soon in the United States?” In the wake of the Immigration Act of 1924, also known as the Johnson-Reed Act, the article’s author worried that the immigration quota would “kill Yiddish” by drastically reducing the Jewish readership of Yiddish newspapers. However, a survey of “newsdealers” yielded the interesting observation that “the buyer of Yiddish newspaper buys an English paper at the same time,” proof that, at least in the late 1920s, American Jewish citizens still held onto their mame loshen.

(The article’s author, Jacob Barshad, would have been happy to know that, far from dying off, Yiddish in the 21st century is experiencing a revival both as a spoken language and as a subject of academic study.)

Intra-community tensions between Ashkenazi and Sephardic Jews, and earnest attempts to understand the differences between the two groups, were also evident in the March 1928 edition that I perused. One story sourced from the Jewish Telegraphic Agency (JTA) asked, “Are the Sephardic Jews in This Country Indifferent to Jewish Community Life?” An adjoining, unsigned editorial responded by attesting to Seattle’s strong Sephardic community and the value of Sephardic culture. I especially loved this zinger against critics of Sephardic cuisine: “Cooking food in oil is much healthier than frying it in butter or ‘shmaltz;’ ask your doctor.”

Clearly, the language politics of Ladino, Yiddish, and Hebrew were at the forefront of many Jewish writers’ minds as they considered exactly how American to become, and how Jewish to remain, in the cultural melting pot. The above-mentioned editorial warns against recklessly throwing “all this Ladino culture overboard” in the name of Americanization. And the piece concludes quite poetically: “When Jews suddenly cut themselves loose from the Yiddish and Ladino that they or their parents have spoken, they have uprooted themselves from the Jewish past and present . . . The least we can do therefore, if we really want to preserve our Jewishness, is to remind ourselves every once in a while — and our Jewish gatherings are surely the places for such a reminder — of our Yiddish and Ladino that we’ve imbibed with our mother’s milk.” 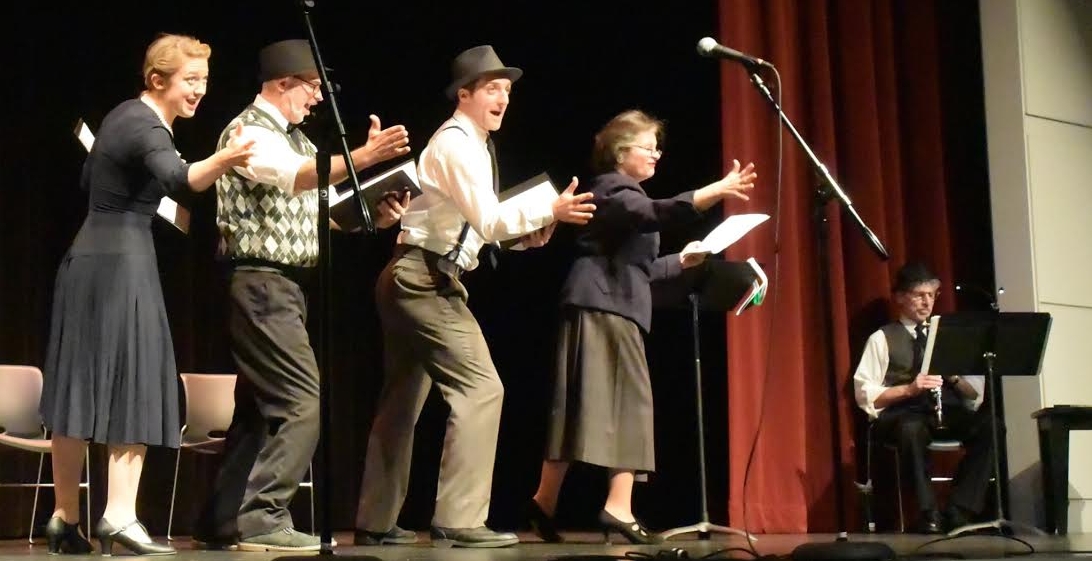 Book-It Repertory Theatre actors bringing nine decades of local Jewish news to life at the Nov. 16 performance of “Letters to the Editor” at the Stroum JCC. Photo by Joel Magalnick.

Voices from the Past

I am truly struck by these passionate journalistic voices from the past, who, rather than expressing a valuation of one Jewish language over another, bring Ladino and Yiddish, Ashkenazi and Sephardi cultures together in the name of preserving communal connection to Jewish history. (And, as I did with Yiddish, I can issue a happy report to those fearful editors of bygone days: Ladino in Seattle is alive and well, as this week’s International Ladino Day celebration at the UW will attest.)

Joel Magalnick, Publisher and Editor of Jewish Transcript Media, says that finding and sharing these distinct voices is precisely what makes “Letters to the Editor” so compelling to a broad spectrum of the Seattle Jewish scene. He says, “What has been so exciting about the celebration of our 90th anniversary has been the way people from across the community, whether Orthodox or secular, or Ashkenazi or Sephardic, have been excited about finding their families or friends from so many years ago in the digital archives, and how they have wanted to share that with people.”

Want to see more articles like this?  Sign up for our newsletter!
⇒ Learn more about the Stroum Center for Jewish Studies at the University of Washington, our Sephardic Studies Program, or our Israel Studies Program.
Note: The opinions expressed by faculty and students in our publications reflect the views of the individual writer only and not those of the Stroum Center for Jewish Studies.
By Hannah Pressman|2018-11-13T13:56:04-08:00December 4th, 2014|Categories: Arts & Culture|Tags: American Jewish Community, Hannah Pressman, Ladino, Seattle, Sephardic, Yiddish|0 Comments