After Memorial Day: Putting the Israeli culture of commemoration in a comparative perspective 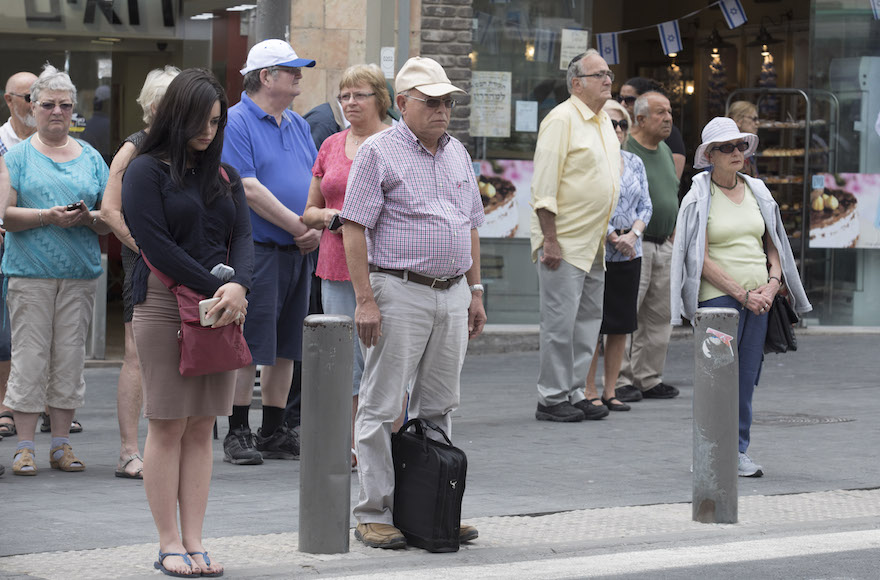 What is the correct way to stand at a memorial ceremony?
Erect or stooped, pulled taut as a tent or in the slumped posture
of mourning, head bowed like the guilty or held high
in a collective protest against death,
eyes gaping frozen like the eyes of the dead
or shut tight, to see the stars inside?
-Yehuda Amichai

In the week before its Independence Day (typically between mid-April and early May), individuals in Israel—regardless of nationality, ethnicity, religion, age, or gender—experience three moments of silence marked by blaring sirens on three separate days.

The first moment of silence occurs on Holocaust Remembrance Day at 10 a.m. The second, in memory of Israel’s fallen soldiers, occurs on Memorial Day eve at 8 p.m. The third takes place on Memorial Day, the day before Israel Independence Day, at 11 a.m. The scene of many emerging from their cars on the highway as memorial sirens sound, and stand noiselessly in commemoration is considered by many, both inside and outside of Israel, to be a tremendously moving experience, but also an exceptional one. While a relatively rare practice, it did not originate in Israel. A national moment of silence announced by sirens first occurred in England on November 11, 1919, to mark the anniversary of the armistice signing between Germany and WWI allies (commemorated as Veterans Day in the U.S.).

Israel is not the only country that uses a siren for commemoration. A similar commemoration takes place each year on November 10th at 9:05 a.m. in Turkey in memory of the nation’s founder and first president, Mustafa Kemal Atatürk, who died while in office on that date in 1938. [/fusion_builder_column]

[Notably, a third country that holds such a moment of silence is Poland, which, in 2003, began to mark the Warsaw Uprising with a memorial siren every August 1 at 5:00 pm.]

As an Israeli who grew up with these intense national experiences, I have long been aware of the gap between the powerful public spectacle that these moments create and the complex personal and emotional experience of people participating in them. This gap has been addressed by Israeli artists and authors including Yehuda Amichai and Etgar Keret. In recent decades, critical voices of ordinary people have emerged as well, such as in the case of an Israeli family placing a slogan criticizing the Israeli government on their son’s gravestone in a military cemetery and Palestinians and Israelis jointly commemorating Memorial Day, thus undermining the national narrative that focuses only on the Israeli grief. Likewise, in Turkey, a more contentious relationship around the culture of commemoration has arisen, hand in hand with a surge in interest in the personality and tenure of Atatürk since the mid-1990s. 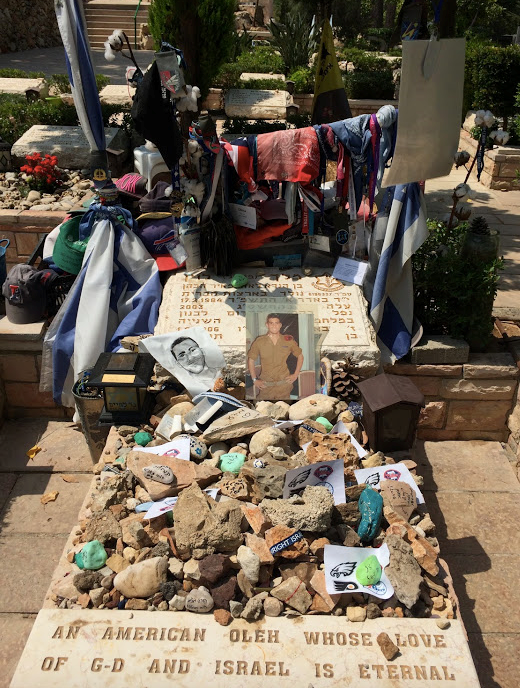 The grave plot of Michael Levin demonstrates some of the changes commemoration in Israel has been undergoing. (Photo credit: A. Goldman)

Following the work of Maoz Azaryahu, my project demarcates these acts of commemoration as a form of “state cults.” State cults can include a cult of personality as well as national celebrations, memorial days, and more mundane acts such as decorating public places with the national flag or emblem, or erecting statues and monuments to mark national leaders or events. State cults, whether initiated by the government or independent individuals and groups help create a sense of belonging to the national community, and establish the national ideology as a form of “civil religion” in the state’s jurisdiction. In partnership with mass education and language reforms, among other techniques— state cults are used as part of a broader strategy to create a sense of homogeneous national community.

My project explores why Turkey and Israel have developed such similar and engaging cults, and what factors have led to recent criticism of them. I have discovered that the founders of Israel and Turkey were not all that different in their initial vision of what their respective modern nation states should be like, and both countries faced similar challenges of absorbing multicultural and multi-lingual groups into their national communities in the aftermath of an independence war (though Israel never intended to assimilate the Palestinians in that way). Both states used similar strategies as they formed a new nation, by including extensive language reforms and constructing an image of the “Modern Turk” and “New Jew,” respectively, as a model for an ideal citizen. Over time, the image of Atatürk in Turkey and a more abstract image of the “fallen soldier” in Israel took over these ideal models, and so, in commemorating Atatürk in Turkey and fallen soldiers in Israel, Israelis and Turks do not just mourn a lost life, they also affirm an ideal image of the nation and define their relationship to that model as a symbol of their relationship with their state. 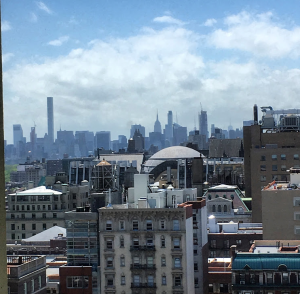 With the support of a Stroum Opportunity Grant that I received this spring, I presented a paper that consisted of two dissertation chapters at the Association for the Study of Nationalities (ASN) 22nd World Convention in New York this past May. The paper, titled “Commemoration in the Age of Privatization: November 10th in Turkey and Memorial Day in Israel in the 1990s and 2000s,” addresses the changes both commemorative days have undergone over the past 20 years as they have developed from standardized state-controlled cults to much more diverse and individualized practices.

Based at Columbia University, the Association for the Study of Nationalities (ASN) is an academic association dedicated to the study of ethnicity, nationalism, and ethnic conflict broadly, with a regional focus on Central and Eastern Europe, the Balkans, Russia, Ukraine, Turkey, the Caucasus, and Eurasia. Presenting at this conference and meeting prominent scholars on nationalism at a time when interest in nationalism and authoritarianism is looming again worldwide was a unique experience that made both the presentations and discussions exceptionally engaging. This was especially true with panels on Turkey, where recent developments sadly prevented some presenters from attending as they were fired from their positions and had their passports revoked. I presented my paper at a panel on Turkish nationalism in a comparative perspective and was fortunate to have an engaged and well-informed audience that provided valuable and much-needed feedback. I was also able to make new connections with colleagues who study nationalism in other regions and who study other aspects of nationalism in Turkey.

I am grateful to the Stroum Center for supporting my participation in this conference, which helped me not only promote my research and writing but also opened my eyes to other cases beyond Israel and Turkey that could be an opportunity for future studies. I look forward to pursuing future research and sharing it with Stroum Center audiences.

Anat Goldman is a Ph.D. candidate at the Interdisciplinary Ph.D. Program in Near and Middle East Studies at the University of Washington. Currently working on her dissertation, which compares the evolution of commemoration and state cults in Israel and Turkey. She conducted 18 months of fieldwork in both states, supported by the Israel Institute Doctoral Fellowship and was a visiting researcher at the Department of Politics and Government at Ben-Gurion University in 2014-2015.