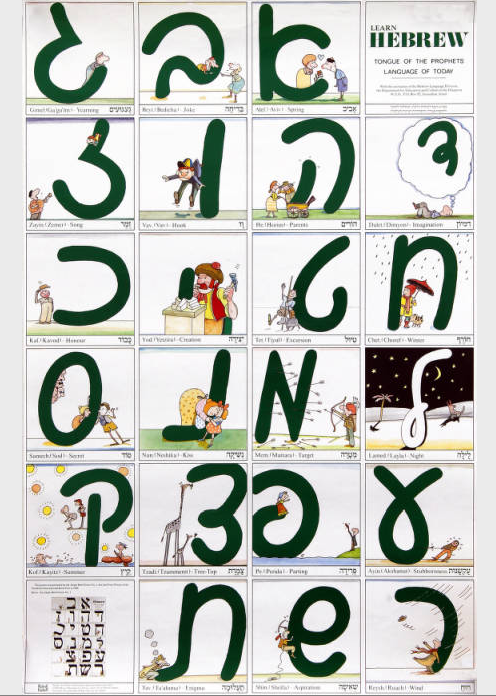 “LEARN HEBREW. TONGUE OF THE PROPHETS. LANGUAGE OF TODAY.”

So commands the top righthand corner of a framed alef-bet (Hebrew alphabet) poster hanging in my father’s study in Virginia. Designed by Avner Katz in 1987, the poster made an indelible impression on me as a child. Each letter of the alphabet participates in a cute cartoon that illustrates a word beginning with that letter. Lamed, the “l” sound that begins the word layla (night), is depicted against a starry night sky with a moon and a coyote howling behind it. Daled, the word that begins dimyon (imagination), appears in a thought cloud above the head of a daydreamer. The letters look fun, playful, and full of possibility.

Across the generations, Israeli authors—not to mention mystics, scholars, and rabbis—have written about the powerful allure of the Hebrew alphabet. In his exquisite autobiographical novella Safi’ah (Random Harvest), which appeared in fragments between 1908 and 1923, Haim Nahman Bialik wrote about his experience living in a European shtetl and attending heder (Jewish primary school). For Bialik, the shapes of Hebrew letters began to appear…

“…in various guises: in the form of beasts, wild animals, birds, fish, and crockery, or simply strange creatures whose like I had not yet discovered in this world for the time being. The letter shin—a kind of adder with three heads; the letter lamed—a stork stretching its neck and standing on one leg like the one that lived in a treetop behind our house; the gimmel—a riding boot, like the one pictured on the jars of shoe polish being vigorously rubbed by a little devil with a tail. . . .The dalet—looking like an ax, and so with them all….”      (p.34 in David Patterson’s translation)

Nearly a century later, in his autobiographical masterpiece Sipur al ahavah vehoshekh (A Tale of Love and Darkness, 2002), the novelist Amos Oz would also write about that magical moment when letters and sound coalesced into reading. His description of teaching himself to read as a child in pre-state Jerusalem likewise centers on the alef-bet’s sudden appearance as friendly shapes. Oz muses, for example, on the lamed that waves at the end of degel (flag) and the shin that appears like a pitchfork in the middle of the word kilshon (pitchfork).

Katz’s alef-bet poster taps into this playful spirit, while also demonstrating a principle of language pedagogy: mnemonic devices, such as patterns or associating a letter with a particular picture, can aid in the brain’s ability to remember and process a new language. Yet the poster’s buoyant demeanor is somewhat at odds with the imperative slogan in its top corner: “Learn Hebrew. Tongue of the Prophets. Language of today.” Beneath this instruction we can locate, in small print, a clue: the poster acknowledges “the assistance of the Hebrew Language Division, the Department of Education and Culture in the Diaspora, W.Z.O.

Connecting biblical language to contemporary Hebrew speech is a classic move of Jewish nationalism. Hebrew’s successful revival at the turn of the 20th century depended in large part upon its historical appeal: the very same ancient language used to create the sacred Jewish canon has been reborn as a “language of today.” The implication is that you, too, can speak Hebrew, “tongue of the prophets,” the same language as Ezra and Isaiah, just with a few adjustments and words for newfangled things like ice cream (some of which were invented by Oz’s uncle, the scholar Joseph Klausner).

This attitude was a major plank in the “language war” of pre-state Israel that pitted Hebrew against its far more popular sister language, Yiddish. Hebraists claimed the upper hand based on aesthetic purity—the language of King David and the prophets!—and cast aspersions on Yiddish’s status as a mixed language used for popular, that is to say lower-quality, literary expression in the Jewish Diaspora. The denigration of the Yiddish language as jargon, a mongrel language unworthy of artistic endeavor, was ideologically widespread in the years preceding the establishment of the state. Underlying the cheerful poster’s command to “Learn Hebrew” is a complex, often hostile network of anti-Diaspora and anti-Yiddish sentiment.

I didn’t know any of that history, though, when I gazed at the Katz poster as a kid. I saw a language that looked fun.

I saw letters that danced.

The spaces we inhabit in childhood become mapped onto our memories. When I think about home, I think about my father’s study and its jumble of medical books, Judaica, and family memorabilia. In contrast to the overflow of texts on those bookshelves, the alef-bet poster on the wall was contained: a set sequence of letters that would always be the same. Even as our family’s parameters shifted, with spouses and grandchildren appearing, people moving away and returning, the alphabet in its silver frame in the den was beseder—the Hebrew expression that technically means “in order” but colloquially means “ok.”

Beseder is one of the most popular expressions in Hebrew, used on its own or in the phrase hakol beseder—“everything is ok,” or “relax, it’s cool.” In sociolinguistic terms this is a calque, a direct translation from the Yiddish expression altz iz in ordenung. The fact that a Germanic-sounding assertion of order has become, through Hebrew, one of the quintessential Israeli expressions of eased reassurance is one of the many ironic delights of learning the “tongue of the prophets” as a “language of today.” 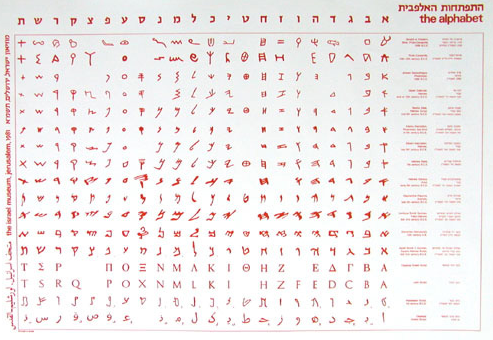 This poster of the development of the alphabet was produced by the Israel Museum in 1981.

Now in my study in Seattle, I too have a poster of the Hebrew alphabet. I purchased it at the Israel Museum in Jerusalem during my college study abroad semester, a prequel to my graduate studies in modern Hebrew literature. The poster is an unassuming tan color, but the words on it are vividly red. The letters line up so that you can see what symbols are similar among a dozen streams of ancient languages—Phoenician, Samaritan, Classical Greek. Some of them really do look like pictures, reminding me of Bialik’s stork and Oz’s pitchfork. Near the poster, assorted texts reside together on my bookshelves: scholarly volumes by Anita Shapira and Hannan Hever, Itzik Manger’s Shtern afn dakh (Stars on the Roof), the Brown-Driver-Briggs biblical concordance, novels by David Shahar and Haim Be’er.

The red letters on the tan poster appear to me today as magical, mercurial shapes. They still capture my dimyon—the imagination depicted by the letter daled in Katz’s daydreamer cloud. The rows of red letters remind me that languages, like people, have parents, indeed entire families, that connect us to our past and obligate us to the future. Now, far from the Rehovot ulpan room and the dodgeball court where I first gained my identity as a Hebrew speaker, I craft a new identity as a writer, perpetually in dialogue with this language and its history.

And the letters dance on.

Want to see more articles like this?  Sign up for our newsletter!
⇒ Learn more about the Stroum Center for Jewish Studies at the University of Washington, our Sephardic Studies Program, or our Israel Studies Program.
Note: The opinions expressed by faculty and students in our publications reflect the views of the individual writer only and not those of the Stroum Center for Jewish Studies.
By Hannah Pressman|2017-09-04T22:41:37-07:00December 31st, 2015|Categories: Hebrew & the Humanities, Israel & Hebrew Studies, Naomi Sokoloff's Blog, Personal History|Tags: Hannah Pressman, Hebrew, Israel, Yiddish|2 Comments