A popular name with a religious meaning: Michael means, “Who is like God?” Image via etsy.com.

Every language has its charms. And every time a person learns a new language, a window opens onto new ways of perceiving the world and new ways of thinking.

One of the charms of Hebrew, for me, is its delightful trove of personal names. Growing up in America, I generally experienced names as proper nouns, labels specific to individuals, and therefore something to be taken, simply, for granted. At age 20, though, when I began to study Hebrew, I discovered a world brimming with meaning and teeming with life. Visiting Israel in the 1970s, on any given day I was likely to meet figures from the animal kingdom—people named wolf, bear, bee, bird, ewe, lion, or cub (Zeev, Dov, Devorah, Tzipora, Rachel, Arieh, or Gur). Joining these were all manner of graceful horned creatures, including deer, fawn, ibex, and gazelle (Tzvi, Ofer, Yael, and Ayalah). I was surrounded, too, by a profusion of flowers and trees: not only dahlias, susans, myrtle, laurel, roses, irises, and lilies (concepts familiar to me from English, and in Hebrew called Dahlia, Shoshana, Hadas, Dafna, Vered, Iris, and Lily), but also Tamar, Savyon, Havatzelet, Rotem, Ilan, Ilana, Alon, Alona, Nitza and more. Many names prevalent in Hebrew at the time had been self-consciously chosen to denote flora and fauna of the land of Israel, reflecting Zionist love of the land.

Similarly, names reflecting religious belief proliferated, often as part of deliberate attempts to reinvigorate Jewish identity. There were names that directly expressed faith: Emunah (faith), Geulah (redemption), Nissim (miracles), and those that referred to God, such as Nehemiah (God comforts) and Azaryah (God helped). Most striking to me as a Hebrew learner were names perennially popular in English, but whose meaning often remains obscure to English speakers and yet patently obvious in Hebrew. Among them are Daniel (God is my judge), Raphael (God healed), Michael (who is like God?), Nathaniel (God gave), Yoel (that is, Joel: the Lord is God), Yohanan (John: God’s grace), Yonatan (Jonathan: God gave).

Identification with the biblical past gave rise to many Israeli names with secular rather than religious intent. Some names recall ancient heroes (such as Gideon, from the root indicating “to hew, cut down”; and Yair, from the root “to shine”). Some, highly traditional, recall characters whose names are the subject of etymological discussion within the biblical text itself. Think of Avram/Avraham (father of multitudes), Shimeon (Simon, having to do with hearing), and Reuven (perhaps indicating “God saw my misery” or, perhaps, “Look, a son”).

If names favored by a society indicate important cultural values, consider how many forms of happiness Hebrew celebrates. In English, to be sure, we have Joy and Felicity. Hebrew, though, is overflowing with possibilities: Ron, Rona, Rina, Yaron, Simcha, Sasson, Asher, Yizhak, Aliza, Gil, Gila, Gayil, Hedva, and Edna, for example, each with its own nuances. What vitality! Not to mention, Hayim (“life” itself) and Havah (also “life”). 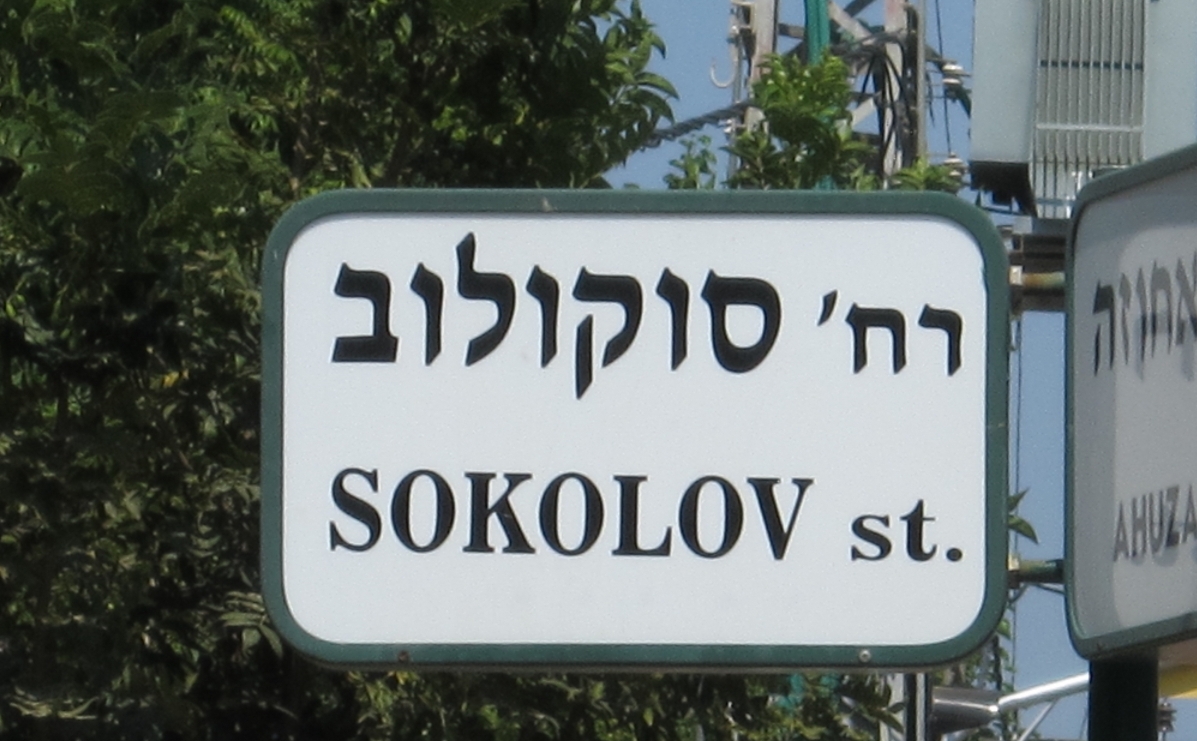 Not least significant among the names I encountered as a Hebrew student was my own. When I was a child, I knew that “Naomi” came from the Bible, and I knew that it had a meaning (“pleasant”), but I experienced it at that time as an uncommon thing, a name that was often mispronounced and frequently the object of puzzled looks or gentle teasing. I remember being called Niomi, Nee-omi, Wyoming, and Gnome-y (at times with a hard “G”). As for “Sokoloff” – that was a name that elicited bafflement and regularly required spelling aloud. In Israel, in contrast, I discovered that “Naomi Sokoloff” was as easy to grasp, as common, self-evident, and accepted as “Mary Smith” in the U.S. No one needed help spelling this name in Hebrew, and I quickly found that there is a Sokolov Street in Tel Aviv, Jerusalem, Haifa, Herzliyah, and quite a number of other cities as well.

To this day I know of no connection between my family and Nahum Sokolov, the Zionist essayist (and translator into Hebrew of Theodore Herzl’s visionary novel, Altneuland or Old-New Land) for whom all those streets are named. But I was intrigued by his prominence in Israeli geography and I researched the origins of the surname, how it came to appear in this land, who brought it there and what brought them. In short, I began to distance myself from the self-absorptions of adolescence and stepped into history, newly alert to connections between my own life and larger contexts in time and place.

Books and books – popular and scholarly – have been written about place names in Israel. Some of the names honor individuals and others are symbolic, such as Rosh Pinah (a town founded in 1882), which means “cornerstone” and suggests national restoration as it alludes to Psalm 118:22. Likewise, there is a great deal to be said and much to learn about family names in Israel; often a Hebrew one indicates the adoption of Israeli identity or the transformation of earlier names that hark back to Yiddish, Russian, Arabic, and other languages. German “Mandel,” for instance, might become Hebrew “Shaked” – both meaning “almond” – and “Steinberg” might be translated as “Hareven” – both meaning “stone hill.”

Indeed, the topic of names always continues to exert fascination, for fashions in naming continually evolve and reflect the times. Biblical names, like the flora and fauna so popular in Hebrew in earlier decades, are less common today in certain circles in Israel and at times are emphatically discarded as signs of tired ideologies. Other trends have emerged over the years. One has been to choose names on the basis of sound, rather than meaning. Another has been to choose names that can fit both Israeli and American contexts, such as Tom, Guy, Roy, and Shirley (sounding, in Hebrew, like the words that mean innocence, valley, my shepherd, and my song). A recent trend in Israel has been simply to favor international names, such as Emily and Angela.

One of the joys of learning Hebrew is to gain entrance into this history and to follow this developing story. Rewards start at the very beginning. Even the simplest vocabulary items in an introductory class offer insights into Hebrew names. Tova, Yaffa, and Shalom (good, beautiful, peace) are among the first words students acquire. From there, the possibilities are endless.

Want to see more articles like this?  Sign up for our newsletter!
⇒ Learn more about the Stroum Center for Jewish Studies at the University of Washington, our Sephardic Studies Program, or our Israel Studies Program.
Note: The opinions expressed by faculty and students in our publications reflect the views of the individual writer only and not those of the Stroum Center for Jewish Studies.
By Naomi Sokoloff|2019-09-26T11:57:00-07:00December 3rd, 2016|Categories: Hebrew & the Humanities, Israel & Hebrew Studies, Naomi Sokoloff's Blog|Tags: Faculty Writing, Hebrew, Israel, Naomi Sokoloff|7 Comments